Before I put out the call for submissions for City of Weird, I think I had only met Leni Zumas once, at a lit event, but I certainly knew her work. Leni is the author of the gorgeous novel The Listeners. Check out what Publishers Weekly wrote about it and tell me you don't want to read this book.

Zumas's debut novel comes at the reader in over a hundred self-contained, lucid pieces: a visit to 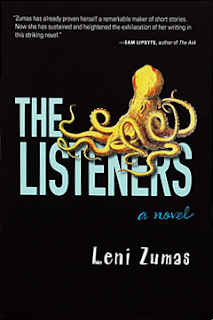 a
doctor in which Quinn, the teenage narrator, is ominously evasive about her weight loss; siblings bantering around the dinner table in a free fall of time; a dream of octopi, creatures that become a motif, much like John Irving's bear. Even happy memories have a melancholy undertone because Quinn is grieving the death of her sister, who is also revealed in fragments ('She became a woman three months before she died'). Of siblings Fod, Mert, and Riley, Riley is the most three-dimensional and the closest to Quinn. Zumas's tone is crisply naturalistic, slightly off center, and downright surreal, sometimes all at once, though often starting as one and drifting into another. The novel's tantalizing form approximates Quinn's mental and emotional state; she isn't in the traditional fog of grief, she's hyper-observant and arch: 'The pong of cheap meat and fry oil hung on the air,' and 'From the subway I climbed to a street ateem with suited normals and walking-homers....' For all this, plot threads are mostly explicable, creating a compelling build-it-yourself tapestry of cherished memories and open wounds.

The Listeners was published by Tin House in 2012. It was featured in volume 33 of Powell's Books' Indiespensable subscription club, and was a finalist for the Oregon Book Award.

The melancholy undertone the reviewer mentions was something I certainly felt in Leni's City of Weird story "Tunnels," When the story is funny, when the story is creepy, whatever the story is, there's a lost-ness and a longing that pervades it. 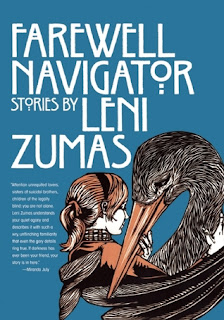 But The Listeners is far from all that Leni has done. She wrote the short story collection Farewell Navigator, published by Grove Press in 2008. She has had numerous short pieces published in places like Matchbook, Kitty Snacks, Keyhole 10, Columbia, a Journal of Literature and Art, and Two Serious Ladies, as well as anthologies. Her writing along with art by Luca Dipierro was made into the fabulous A Wooden Leg, a novel in 64 cards (!) and she teamed up with Luca again (before? I'm not sure on timing) to create Until I Find It, a graphic novelette.

Leni teaches in the MFA Program in Creative Writing at Portland State University.

I'm a huge fan and so honored to have a story she penned in City of Weird. The story is quirky and creepy and sad and gorgeous. Here's a taste from the opening:

Ann lives above an anti-inflammatory cafe in the fifth quadrant. The absence of dairy, wheat, and sugar means fewer cockroaches are liable to gather in the cafe, and fewer, if any, will climb into her apartment. She likes the apartment, though the neighborhood itself, with its thousand porches, bothers her. Porches have hippies. Hippies have smells. Smells have water. Water has bugs. Bugs have eyes. Eyes have caps of flesh.

From the church down the block she hears ecstatic singing, amplified guitars, the stomping of feet. She only listens, doesn’t dream of going in. The parishioners are so young and good-looking Ann thinks it might be a casting site for sportswear models, not a church at all. On Sundays, leash in hand, Lumby straining against the collar, she watches the handsome red building and its handsome, mostly white flock. She feels like an old mole who swims under cemeteries, clammy nose stroking the corpses.

Last year, City of Weird was included in the curriculum of professor Thea Prieto's Introduction to Horror Fiction class at PSU, and I was honored to sit in on a class and talk about the book along with publisher Laura Stanfill and contributor Doug Chase. One of the students wrote this brief essay about Leni's story (along with the fabulous classic "The Lottery" by Shirley Jackson) for the school's Chiron Journal. Warning: there's a spoiler in here.

Leni will be reading from "Tunnels" for Wordstock's Lit Crawl at the Oregon Ballet School, 7 pm on November 4.