I recently had a design job that was very close to my heart. I was asked to design a pin for one of my favorite organizations, Create More, Fear Less. I can't say enough about Create More, Fear Less. It was inspired by Kathleen Lane's experience with anxiety and the connections she made with kids she met while visiting schools with her book The Best Worst Thing. Through workshops both in-person and remote as well as through projects kids can do on their own, Create More, Fear Less inspires kids to explore, create, share, and find their way through fear.

The pin I designed is a limited-edition membership pin for members of the Anxiety Society, a community of supporters who help fund the great things Create More, Fear Less does.

I knew this would be a simple design, mostly text arranged within a shape, but sometimes the simple stuff can take some doing. How can you get the most out of the smallest space, the barest of elements?

Graphic novelist Jonathan Hill, one of the many artists and writers who have designed and executed workshops for Create More, Fear Less, suggested that the pin be reminiscent of old secret society pins or decoder rings. I loved that idea. 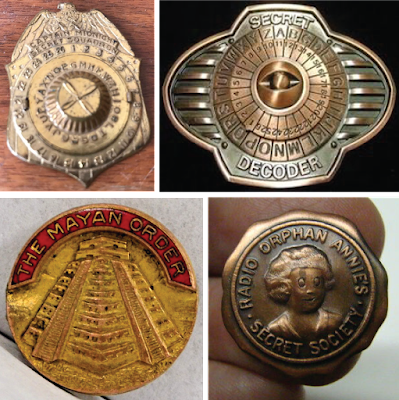 We looked at symbols that might suggest this type of thing. The eye of Horus, stars, radiating lines, hands, triangles, keys, wings... We liked the idea of an eye because it might symbolize imagination, the mind, vision. I thought radiating lines would be a great visual element and also communicate light, growth, something positive coming from something else. Kathleen suggested an icon that might look like both a paintbrush and a torch. Maybe emerging from the eye.

It was really fun collaborating with Kathleen on this design, lobbing ideas back and forth and refining as we went. I started by spacing out the words Create More, Fear Less in a ring around the outside and placing the main text Anxiety Society in the middle. Seeing that the words Anxiety and Society each have the letter I at their centers, I tried lining those up and connecting them, turning them together into the torch/paintbrush. It took some work because the letter Is were not dead center and did not exactly line up. In the font I was using, some letters, like X were wider than others, like E and T. I had to convert the letters from live font into shape and then tweak them. Then I decided to go with a different font and started that process over again.

As is not uncommon in my design work, the idea got more and more distilled as I tinkered. The icons were looking too clunky and getting in the way of the important message of the words. It was hard to make the paintbrush/eye combo read. In the end both the paintbrush and the eye went away and just the radiating lines remained, with a few stars as accents. We'd started with a concept that was embedded in the past and ended up with something modern that still has a hint of its secret society roots.

Some samples along the journey from beginning to end. 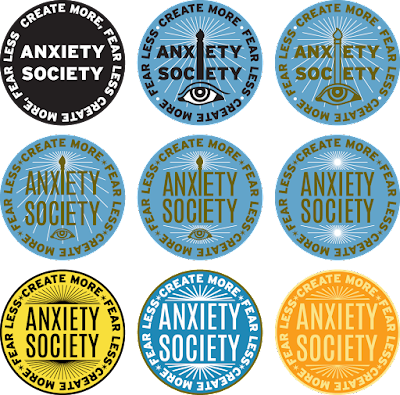 After a lot of discussion on color, we settled on our design. 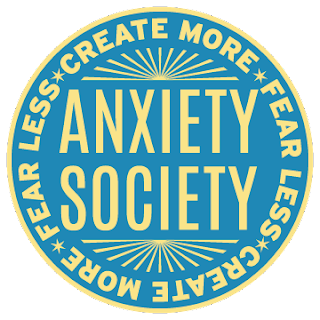 These babies are now newly-minted and ready to go out to members of the Anxiety Society in thanks for their support of Create More, Fear Less. I'm so honored to have been able to contribute a little something of my own. If you're interested in being part of the Anxiety Society and helping Create More, Fear Less do the wonderful things they do (and getting one of these pins to boot), there's more information here. 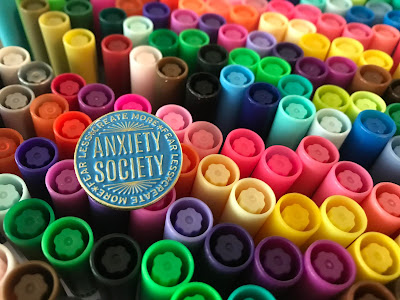 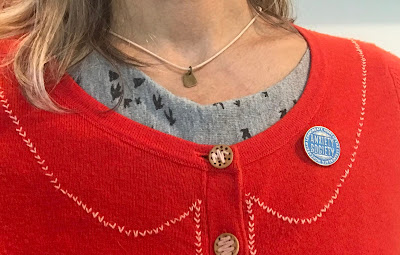 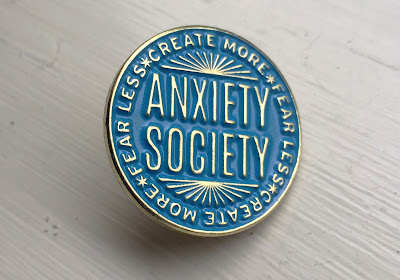