I did a little something different for the book cover design of the short story collection The Paper Garden, coming out soon from 7.13 Books. Here's the introductory description I got from the publisher when I was first contacted about the project:

The short stories in The Paper Garden explore a variety of feminist issues from the darkly humorous perspectives of both children and adult women. Although this is literary fiction, many of the stories employ gothic and speculative elements, and some are re-workings of fairy tales or myths such as Snow White and the Virgin Mary. Others are more contemporary tales of queer romance, mother-daughter relationships, and mental illness.
I loved this description and then when I found out that the paper garden in the title referred to a collage of paper tulips on a wall, I had the idea of a cover full of collaged paper tulips hiding a couple faces rendered in the style of old storybooks. Something where bright colors and cheery objects hid deeper, perhaps magical, perhaps darker, things. And I thought, I'm going to get out my old paints and brushes. 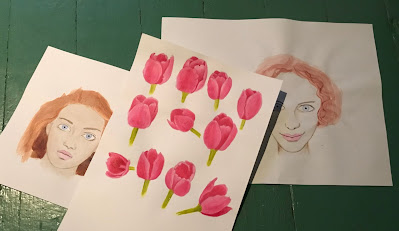 I sketched out and then painted a series of tulips and a few different faces to play with.
It was a pretty less-than-glamorous process as far as creating art goes. With the tulips I googled pictures of the flowers and then sat in front of my computer with a piece of cardstock (if you must know, it was one of those blank greeting cards you can run through your printer) and sketched them roughly, then painted in layers using acrylic paints. For the faces, I used photographs that I manipulated in Paint Shop Pro, for instance purposefully enlarging the eyes to give them a more fanciful look, and then printed out on paper. I used a light box (OK, I stuck the printouts against the window when the sun was good and bright) to quickly trace the shapes so that I had the proportions I wanted and then continued sketching the faces from there.
Once I had my paintings ready, I scanned and then took them into Paint Shop Pro to manipulate, refine, and recolor them. 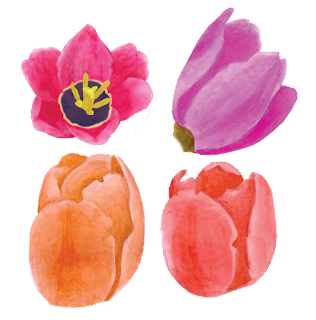 Each tulip had to be cut out of its white background so that it could overlap other tulips and be arranged within the design. Then it was a process of puzzling all the elements together to give the right amount of space to everything, the right balance of color, the right mix of different angles and perspectives of flowers. It's harder than you think. I moved things around and around until I had a couple basic layouts I liked. 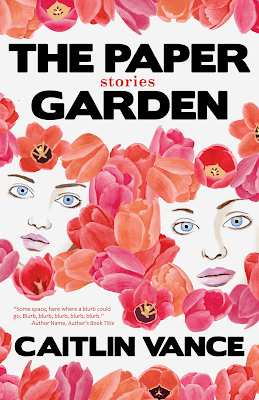 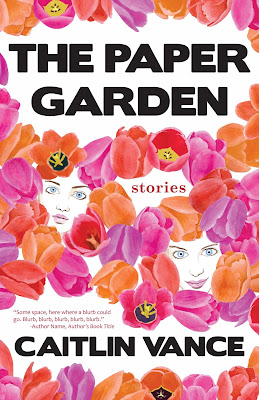 While I liked how arresting the large and similarly haunted faces in the first sample were, I preferred the second, where they were smaller, more hidden. I realized, as I puzzled, that I liked having more white space showing between flowers, more breath in the piece. It helped make it look like a scatter of flowers under which text and faces peeked rather than an outline of flowers flanking the faces.
I sent my contact at the publisher, and she in turn sent the author, different variations on layout and color scheme and we narrowed things down. They wanted the woman to look a little older. They wanted her to have brown, rather than blue, eyes. They were interested in trying a background color that was less stark, a cream or a pale peach.
Then I needed to add detail to make this look more like an actual collage of paper flowers. I love a lot of different things about design, but one of the things I love most is challenging myself to make something look like something it isn't. Yes, I had started with actual painted images. But then they became digital images. And I needed them to go back to being painted images. On paper. Something cut out and pasted together. Overlapping. Having dimension.
Each paper flower had to have a shadow. I could have added a drop-shadow effect in Illustrator, but I wanted something that would look more real. So I created a solid shape version of each flower... 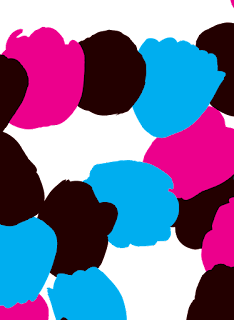 ...then turned them all black—a particular black that I thought would work best for my color scheme. I softened their edges by using a simple feathering effect and then I adjusted their opacity so that they became, well, shadows of themselves.
Then I positioned them underneath and just peeking out from under their prospective flowers. There's more to it than that, but that's the general gist. And I added details like a curled paper edge here, a small tear there. White paper-cut edges. 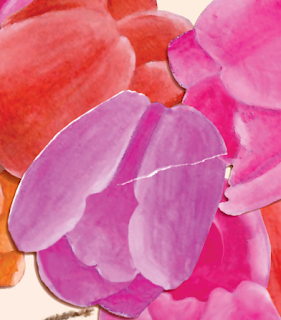 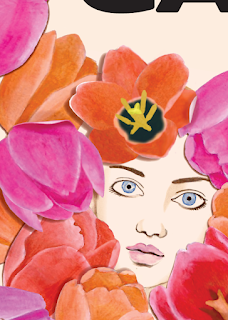 In the end we had to reposition/remove a few flowers to make room for a longer blurb, and then we had a finished design. 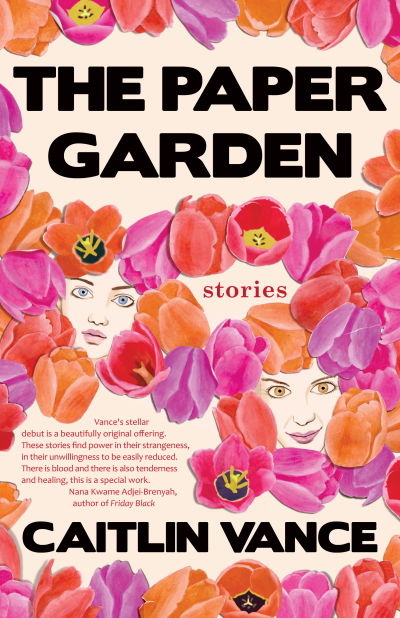 The Paper Garden by Caitlin Vance is due out in June of this year. More info on The Paper Garden and other 2021 titles from 7.13 books is here. Here's an excerpt from one of the short stories. Note that though there's art on a wall in this piece, it's different from the paper collage that led to my design concept.
*
I crept around the whole floor, but could not find a bathroom. I knew Scarlett said not to go upstairs, but I couldn’t help it. I tiptoed up and moved to the right.
Soft, violet light shone out of one door. I pushed it open and snuck inside.
This was not a bathroom at all, but some kind of room I had never seen before. Someone had stuck thousands of silver push pins into the walls. It seemed the person had been very careful about how they stuck each one in, as if the wall had skin and could feel pain. The pins made a picture of a tulip and a little girl’s face. There was nothing else in the room, except for a tin box of pins in the middle of the floor.
I plucked a single pin out of the wall, a piece of the girl’s mouth, and dragged it lightly over my hand.
I thought of the tulip Scarlett bought for me after planting the bucket there and waiting for me to come find it. I noticed the girl on the wall had big eyes, but that she looked only at the tulip, as if hiding from anyone who might see the picture. She was scared. Again, a cavity in my chest filled with hot liquid. This was my face, and Scarlett had stuck all these pins in the wall. It must have taken hours and hours, and she barely even knew me, and my mother would never do something like this. Why would Scarlett make this? Was Noah’s Ark a real story or a fake story? Why didn’t my mom want to get a job so she could buy more cans of soup for us? Where did my dad go, and why didn’t he want to buy me soup? And if God was so nice, why would He let any of this happen? I was too tired to stand. I sat on the floor.
I heard the door creak open and quickly stuffed the pin into my pocket. Scarlett was standing there, hands on her hips. “Saige,” she said, her voice a little less sweet than usual, “I told you not to come upstairs.”
I opened my mouth to speak, but my voice got caught in my fear. I had to try a few times to get the sound to come out. “I’m sorry,” I said, quietly. “I couldn’t find the bathroom downstairs. I really couldn’t find it.” I was about to ask if I could ask a question, but was interrupted by a heavy sigh puffing out of Scarlett’s mouth.
“You want to know why all these pins are in the wall,” she said.
“Yes,” I said. Scarlett had a way of knowing what I was thinking.
“I stuck them in,” she said. “I’ve been working on it for the past few days. I bought thousands and thousands of pins. I studied a single tulip and a photograph I took of a little girl. I stuck the pins in one by one, slowly and deeply, thinking all the time about the girl and how happy she’d be when she saw it. I think I did a pretty good job, don’t you?”
As she looked at me for approval, I noticed how long her eyelashes were, like legs of a wolf spider.
“You did a good job,” I said. I didn’t want to upset her, to find out what she turned into when provoked.
“And do you know whose face this is?” she asked, coming closer to me.
Yes, I knew whose face it was. I knew whose picture she had studied. I knew because I was always sneaking around, hiding behind doors and listening to conversations, spying. Scarlett was just like me, only she was older, so she had thicker curtains and sneakier tricks. She’d been watching all along.