a moment in the day: crow


Dusk is falling, early June dusk, which means it's late, maybe nine o'clock. I'm taking Nicholas out for a walk.

He's eager to get going down the sidewalk, pulling against the leash, but just over my head a crow swoops, landing on the low electrical wire a few feet away. The crow cackles and cackles like an angry witch. Caw, caw, caw! What is she so upset about?

I follow her gaze, and there on the next-door driveway is Kittan, the incredibly friendly neighbor cat who likes to try to get in my car in the mornings and sneak into our house at night.

Another crow story is that last weekend, Stephen was at his mom's house where the neighbor had these three baby crows who had lost their nest when a tree was cut down. Stephen's mom's neighbor was taking care of the crows. At one point in the visit, pictures were being taken of Stephen with a lovely, docile juvenile crow perched right on his shoulder. I was very jealous. 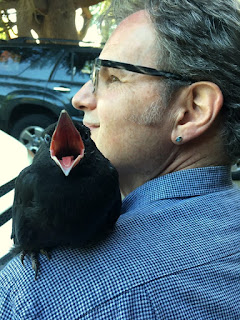 Another crow story is that my mom has this hummingbird nest in her backyard, and a few weeks ago, two tiny baby hummingbirds were in that nest. And a crow landed in a tree not far away. My mom saw it through the window. She said she saw that crow assess the situation, get into position, dive at the nest, and in seconds, the babies were gone.

Another crow story is that years ago when I lived in Wisconsin, I was out taking a walk, and across the street, jetting through the air was this... duh, crow. But it was making the most uncrow sound I'd ever heard. A high pitched keening. Like when you pinch the blowy part of a balloon and let the air out. I didn't think a crow could make that sound. Maybe it wasn't the crow.

And I looked down and the crow was being chased, on the ground, by a rabbit.

And I looked up, and in one of the crow's claws, it had a small, squirming gray animal.

Logic started to piece itself together. The rabbit was chasing a crow that was carrying off her baby.

The baby was screaming.

As the crow landed on a wire, the mother rabbit went running off. I didn't know how far away. I stood on one side of the street and the crow perched on the wire just on the other side, the baby bunny in one clawed foot.

The crow used the one foot to pin the bunny against the wire and lowered its beak down toward the bunny's neck.

I started walking across the street.

I couldn't think to yell or wave my arms. Just my legs were working.

I stepped toward the curb almost below the crow. The crow jerked its head down at me.

And dropped the bunny.

The little gray shape fell and landed in the grass, and the crow flew away.

They say you shouldn't move someone when they might be hurt, but on impulse, I bent and picked up the bunny, examining it. Silk in my hands, its little bunny ears. Its little bunny legs were already trying to hop out of my hands. It... he... she... wasn't hurt at all.

When I think about it now, I believe I did wrong on every possible account. Yes, I left the bunny there. I hoped that, if I cleared out, the mom would come back and take the bunny home. But I'd picked it up - and sometimes I think about how animals will reject their young if they're touched too early by humans. I don't know if the rabbit came back. I don't know if the crow came back. The next day, I went out and walked and looked and didn't see the bunny.

And here's the thing. Crows gotta eat too.

Now, standing on the sidewalk in Portland, I look back and forth between the crow on the wire and Kittan, the cat in the driveway. The crow cackles and cackles like an angry witch. Caw, caw, caw! What is she so upset about?

I wonder if there's a crow nest somewhere close by, and the crow is cackling her head off in order to keep the cat away.

But I'll never know. Because my baby, the impatient Chihuahua, Nicholas, is pulling against his leash. He doesn't care about the crow and he apparently hasn't noticed the cat. He wants to go and sniff and pee. And the mom thing in me lets go of my curiosity and allows him to lead me down the street.