Whenever I start work on a new book cover, I ask myself what the challenge with this one will be. It's one of the things I like most about designing book covers, that there's always some specific challenge, whether that be fitting all the elements in place, or setting the right tone, or trying some graphic process I've never tried before, or trying my darnedest to make an idea work when it probably isn't going to work, or, or, or.

With Joanna Rose's novel A Small Crowd of Strangers, due out later this year from Forest Avenue Press, the challenge was coming up with a concept. How best to create a design around a book that's not only quirky and funny but also about some heavy topics like religion and abortion. Pattianne Anthony, the book's protagonist, and her boyfriend/soon-to-be-husband are on two different sides of the abortion debate, and it gets personal when she becomes pregnant. 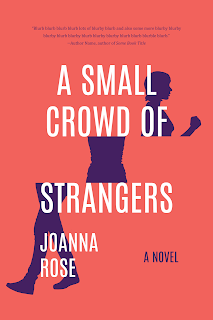 My first idea for a design grew out of that tension. A figure representing Pattianne but cut in three pieces, each piece pointing a different direction. My thought was that this would show she was a character divided, someone who didn't know which way to go—and if people made the connection between her centrally located belly and the topic of abortion and body autonomy, that would be great, but not necessary.

Publisher Laura Stanfill explained that Pattianne's not so much divided as falling into things all the time. The more we talked about it and the more I read pieces of the book, I realized I was focusing too much on the abortion topic when there was so much more this book was about. I tinkered with a number of different concepts but there was one idea we all kept coming back to as I submitted samples. This one started out from the characterization of Pattianne as a dreamer who, in the end, is just trying to find her people, to find connection. 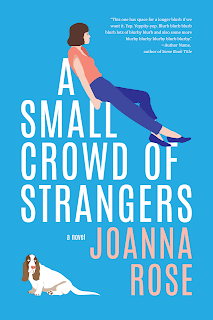 That's what I think of with the figure I created for Pattianne in this early draft. A dreamer wistfully looking into the future. The second character is Bullfrog, a dog who figures significantly in the story. (And who better to exemplify the longing to find connection than dogs, amirite?) From the description of Bullfrog in the book, I figured he must be a basset hound so I looked at a lot of photos and created him from images of particularly sweet looking dogs. This early draft was before I really started tinkering with his coloring, but as an aside, I kind of liked that the color I used for Joanna's name here is rose.

We were getting feedback from Publisher's Group West that the bright color scheme along with the woman figure might skew "women's lit" so I tried a similar design with darker hues. And experimented with Pattianne removed and just Bullfrog remaining. Like in this street sign design I worked on from an idea Laura suggested to me.

In the end, between all of us and author Joanna Rose, we decided to leave Pattianne off and give Bullfrog the spotlight. But there was one more detail to work out. Bullfrog wasn't exactly Bullfrog. He wasn't a basset hound as I'd originally thought. And in fact, he had once been a real dog, Joanna's dog, and I wanted to honor that as best I could. 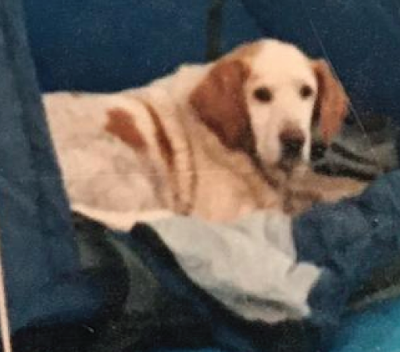 He had very different ears. And a very particular spot on his back. I added that spot, although I simplified him a little in keeping with the spareness of the design, so I only focused on that one spot while he has a few others. And if you look close you see some brown around his one eye. 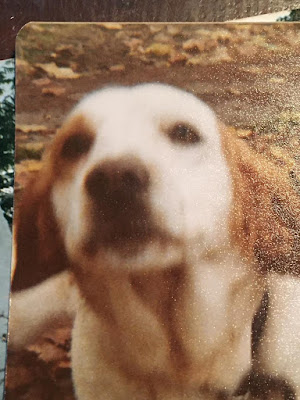 Oh my gosh, this picture!

I asked Laura and Joanna if I could expand on that brown and turn  it into a more obvious spot because it was the only way I could keep the white of that eye from disappearing against the background. They were OK with it. Then I added some shading to the other side of the face, a shadow, to take care of the same issue. It's an interesting give and take, wanting to honor the memory of a real being and at the same time honor the principles of aesthetics. When I was done, I sent it to Laura and she sent it to Joanna and Joanna said, "That’s him!!"

My heart leapt for joy.

There was still fine tuning, with color and shading, and the darkness of the ears, and the question of shadow on the right front paw. Here's a little montage of Bullfrog through his evolution. 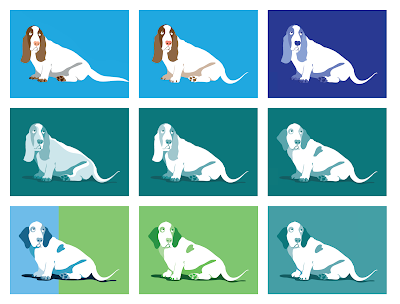 In the end, with Bullfrog in the spotlight and using the sunburst in the lettering that had arisen back when I was playing with the very dark, almost underwater-looking idea I showed off above, we finally had our cover. 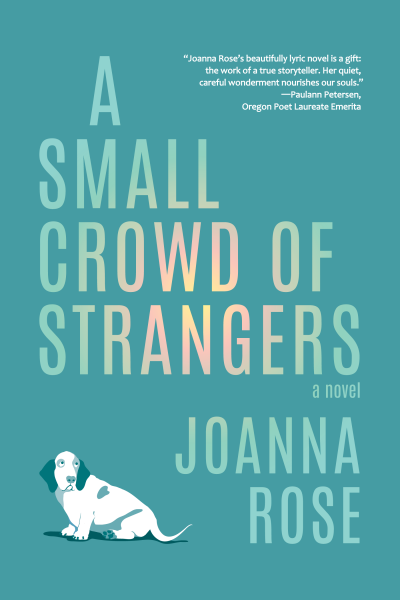 Check out that blurb by Paulann Petersen!

A Small Crowd of Strangers is due out the fall of this year from Forest Avenue Press. More information is here. Here's a snippet from the book:

She’d always had a dog. She’d had Starla since she was in grade school, and before that there was a beagle named Short Stop who slept with his nose at the crack under her bedroom door, wanting to get in. Her mother said, No dogs in the bedrooms. And then when they got Starla, she heard them one night after dinner, her mother saying, No dogs in the bedrooms, and her father saying, Oh, what can it hurt? That night, she learned something about her father. She was only little. And it was her bedroom, not Jen’s.

She was just starting to realize that she really should call Michael, and maybe she should at least go buy some dog food and spend some time with Bullfrog before saying Yeah, I’ll take him to be my dog, but then there they were. And she wanted him, as soon as she saw him, all down low and wagging, and not shedding all that much, really. He was mostly white, just a few brown spots, and soft brown ears. She got down by him.

Then Frankie got all teary, and Pattianne did too, and he handed her a brand-new red leather leash with the price tag still on it. It matched his collar.

“I have a twenty-five pound bag of dog chow in the car,” he said. Teary.

“And a big box of Milk Bones.”

“And his rabies papers and all are in here.”

He handed her an envelope, and then he hugged her, and they were a circle with Bullfrog in between them, Elizabeth laughing, although she didn’t sound very happy, but she was laughing. Michael would laugh too. Bullfrog was a funny guy.
Posted by Gigi Little at 2:37 PM