one more about jesus christ superstar

Oh Oh Oh! I totally forgot about the part where, instead of at first despairing and then muscling up the personal strength to be resigned to his fate in the Gethsemane song, Jesus comes out with an unprescedented, No, no, no!" - followed by a great thunder clap and flashing of lights as if God must strike Jesus with lightning in order to get him to go through with it.
Posted by Gigi Little at 1:35 PM No comments:

after all, i've tried for three years

Monday night I went with Frank to see Jesus Christ Superstar at the Keller Auditorium. Lots of fun. It's one of those family favorites - we watched the 1973 film over and over - so for me, just hearing the opening strains of the overture fills me with a particular love - kind of like when Mom goes to see a Star Wars movie and In a Galaxy Far, Far Away can make her eyes fill up.

When I saw Jesus Christ Superstar live with Carl Anderson a number of years ago (his last year) and did the wait-at-the-backdoor thing and did meet him, I stuck my hand out and said, "I've been waiting for this since I was eight years old." And he acted touched and kissed me on the cheek.

Monday night it was Ted Neely as Jesus - very exciting too. His voice has gotten deeper, has a bit more weight to it now. He's always gotten the "he's whiney" thing, I think, and though I never had a problem with it, I believe the years have taken away a bit of thinness in that voice. Makes that very particular sound he has stand out while giving it a touch more depth. Early on in the show, he hit a high note in his head voice and I thought, oh no, can he not get to that shrill anymore? Then the temple scene, and holy god, there it was - and powerful!

I had to embarrass myself and do that thing at the end where you whooooooo from your seat.

Let's see, other thoughts. I thought Pilate's Dream was especially nice. Understated. And the Judas was very good. At intermission Frank said, 'he's sort of "doing" Carl Anderson, and I have to say, I like that.' He wasn't aping Anderson, but there were a lot of similar interpretations, and I'm with Frank: ahhhhhh. I had to adjust my mind - I always have to adjust my mind for a different Judas - but John Twiford did a powerful job. Herod was quite funny. And his Herodettes - funny.

Had Ted Neely not been so good, what they did during the overture might have ruined the show for me a little bit. One of the wonderful things about the Jesus Christ Superstar telling of the story is the ambiguity as to whether or not he's God or the Son of God. So when they had Jesus perform a miracle and bring someone back from the dead to open the show, it undercut that open question - and undercut that first number, Heaven On Their Minds, which to me is such an amazing song, and such an important part of the whole. Likewise when Jesus

[spoiler - in case someone might happen upon this little post before going to see the production somewhere else in the country...]

rises off the cross and ascends into the rafters, into heaven, at the very end. A nice bit of special effect, but not the kind of interpretation I want to see of this particular story.

And then to drop a banner of the shroud of Turin like one of those cheesy American flags at the end of a Shrine circus... oh no. No, no.

Another odd thing: Jesus looking up over the audience to somewhere on the theater ceiling and talking to God through the whole show. First time he did it, I had this crazy thought that Neely was trying to cue a spotlight operator to, I don't know, get the light out of his face or something. Then I realized, no, Jesus was having conversations with God. First it was curious, then distracting. I told Frank, in a way, maybe it helps balance the whole raise-a-guy-from-the-dead opening, because when he talks to God, Jesus looks kind of like a crazy guy. But yes, overall, I found it distracting.

Oh, and OK. Jesus died for a long. long. time. His performance on the cross was great. Fiendish. Disturbing. And I liked that they added in the whole "I thirst" vinegar-on-the-sponge thing and the sword-into-the-side thing. But wow. He died so long it started to get comical. Especially when you finally thought he was dead and the orchestra was playing the sublimely mournful John 19:41, and suddenly he heaves out yet another dying breath.

But wonderful performances and some great interpretations - the leper scene - the Herod scene. We had a lovely evening. Makes me want to go watch the 1973, of course - and the commentary in which Ted Neely talks all nostalgic and sweet about that time in his life.
Posted by Gigi Little at 6:36 AM 1 comment:

Stephen has five pieces, some new, some old - including one favorite from the first show I saw of his - in a group show at the SAM Gallery in Seattle. SAM Gallery is the sales and rental gallery of the Seattle Art Museum. It's housed in the beautiful art deco Seattle Tower. 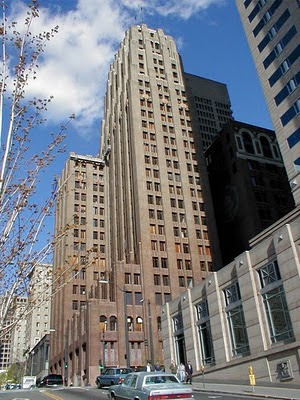 Here's a lovely detail of... well, some part of the building. 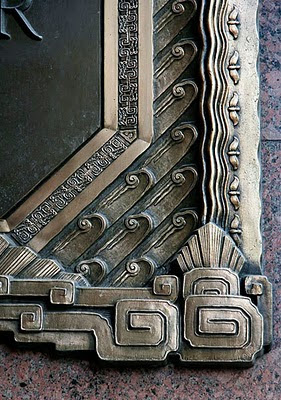 What could be more perfect for Stephen's Medusa? Which I've already posted too many times on this blog, so here's one of the earlier posts.

And instead, here's another piece in the exhibition: 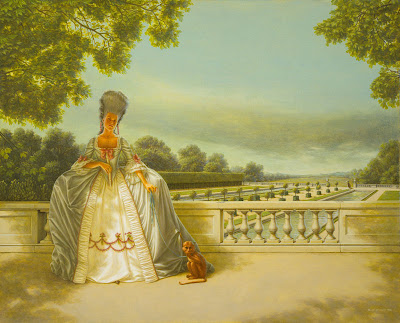 The show is called Referencing the Past and is up now through February 12. 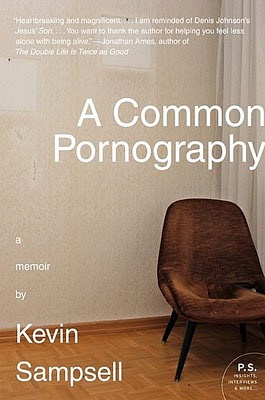 Every time I read Kevin Sampsell, I'm trying to figure out how he does what he does.

One of the main things I read for is voice - was far before I even got involved with Dangerous Writing. And part of this is that writing without a particular voice tends to have a remove. A sense of distance that keeps me from being able to fully touch the narrator or the characters.

Kevin Sampsell has written a memoir whose voice uses remove like a painter uses just the right sable brush. And I don't get how he does it.

There's something about the spare, detatched, matter-of-fact wonder in the voice of A Common Pornography that, to me, puts that adolescent boy (then teenager, then grown man) on the page. He's quirky, he's charming, he doesn't grandstand. You do touch this narrator, and you can't help but fall in love with him. With all his talk about his suitcase full of porn and even the spudnuts (read it, you'll know what I'm talking about). It's very a infectious read. The array of short, clipped snapshot-like stories makes you lie in bed late, knowing you have to get up early but telling yourself, just one more, just one more.

Another thing I find endearing and refreshing in this book is the way it seems to exalt the ordinary in life. There's plenty of out-of-the-ordinary stuff in here, but you also get to wall-fly yourself for events in his life such as getting drunk for the first time off of vodka and Squirt and trying to kiss a girl in the 7-11 parking lot.

And such a portrait of a time period - takes me right to the era of my growing up.

Here's a piece. Can you call it a chapter? I love the ambiguous fullness of "for no good reason." And then that matter-of-fact final line - a beautiful setup for the rest of the book.

When the gun sounded, Matt ran ahead of me with the other kids who filled the park. I could tell they were all excited, yelling into the wet spring air. The sky was speckled with birds and high dark clouds. I ran the other way, back toward home.

When I got to the house, Mom held me as I cried for no good reason. My brother came in the side door with his homemade Superman cape over his shoulder and a basket of decorated eggs and chocolate candies. It was the first time I gave up.

It comes out next week.
<linky linky>
Posted by Gigi Little at 6:48 AM No comments:

I was doing laundry last night, down in the basement of the building, and my brain was churning up little bits of writing. The opening two sentences of a piece came to me as I was transferring wet clothes from washing machine to dryer. Doing that thing where you flap out each individual shirt to uncrinkle before you toss it in. You can't rush the drying. And you can't leave your wet clothes there and run upstairs to your apartment to write a note. Or you could but that's three floors up, and if you leave your post maybe someone will materialize in the laundry room to take your spot and remove your clothes to dry their tennis shoes.

I started going through my pockets. In the inside pocket of my jacket: a pen. Huzzah! In the other inside pocket: nothing.

I started looking at the dryer sheets.

As a last resort, I pulled the lid off of the metal trashcan down there for collecting the bunched up fuzz from the dryer lint traps. Figured all I'd see in there was fuzz and old used dryer sheets, but what I saw, nearly clean on top, was a big piece of crumpled up white paper with a child's crayoning all over it.

The child must have been quite young because there was nothing discernible in the drawing. Just lines of color curling all across the paper. And no name.

I wanted to but I didn't want to. It was perfect and clean and there for the taking, but to tear a piece off of a child's drawing seemed like such an intrusion. But it was just going to be tossed. But tossed and torn are two different things.

In the end, my two sentences won out. Felt bad in the doing but now I have my notes. Jotted down on the back of a scrap torn from the drawing of a child I don't know.
Posted by Gigi Little at 8:41 AM 2 comments: