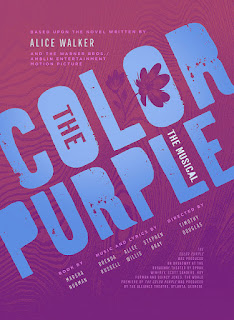 I had seen the movie and read the book. My date had done neither. I kind of envied how fresh the story was going to be for my friend, but it's always fun to see how something you know is reborn in a new form. In this instance, it was The Color Purple. I was very curious what a musical based on Alice Walker's classic novel would be like, and what Portland Center Stage would do with the material.

I have to admit that I am not overly a fan of the music in modern musicals. It's my own problem. There's something about the general style that tends to put me off. So I was a weensie bit nervous as I went down to the Gerding Theater to see the show. But PCS's production began with music that started sweet and then blossomed into a full-fledged old-time gospel tune that filled the theater and put a huge grin on my face.

The score for The Color Purple is a mix of modern and period pieces. The more contemplative or solo pieces tend to be more modern, with the bigger production numbers more period. Contemporary music written in the style of old time music can often be a sad, limp imitation, but I think this score pulls the period stuff off beautifully. Some of my favorite songs featured a Greek Chorus trio played by Lauren Du Pree, Nia Marché, and Ithica Tell as church ladies in a manner reminiscent of the "Pick-a-Little, Talk-a-Little" ladies from The Music Man.

It's worth noting today, as the first official day of Banned Books Week, that Alice Walker's novel has frequently been challenged and censored for reasons ranging from sexual and social explicitness, to violence, to "troubling ideas about... man's relationship to God." I thought the role of "man's [and woman's] relationship to God" was framed beautifully by the songs written for the musical retelling of the story. It doesn't matter whether you're a spiritual person or not. It's a thread that goes beyond the question of belief or religion. Celie's relationship to God has its own arc, which compliments the arc of her character as she (here come the spoilers) endures abuse, as she gives up her babies, as she's married off to "Mister," as she pines for her sister, as she falls in love with Shug, as she slowly finds self worth and independence. 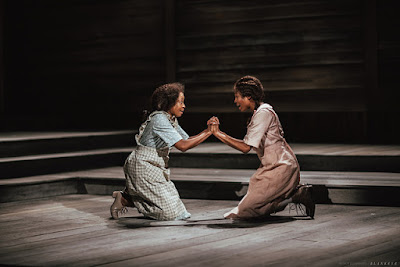 Celie is beautifully played by award-winning Broadway actress Felicia Boswell. Boswell has big acting and singing chops and, like the character of Celie, seems to grow on stage. Toward the end of the production I found myself actively wondering how old the actress is, noticing that even from my fabulously close (4th row) seat, she appeared to have gone from girl to woman, slowly, seamlessly, in front of my eyes.

Another stand-out is Chaz Lamar Shepherd, who plays Mister. His performance of "Mister's Song/Celie's Curse" knocked my socks off. 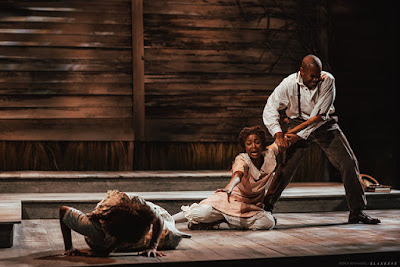 The main stand-out for me, musically (and I'm cheating a little by saying this), was the ensemble, though. The mix of voices was somehow absolutely perfect in my ears, a gorgeous thing.

But I have to say, for me the star of the show (and when I mentioned this to my friend afterwards, he said it was the same for him) was the set. Or set and lighting, together. I debated mentioning this without explaining it, but in Portland Center Stage's own Flickr stream of promotional photographs, it's right there to see, so I figure it must not be too much of a spoiler.

But if you're a stickler about spoilers...

...and you don't want to know until you've seen the show, stop right here and, well, see the show.

...and see a couple of those pictures (which will give it away instantly, which is why I'm playing this little broken-paragraph game with you right now)...

The set is minimalist and bordered by walls of wooden slats. The wood looks worn and gives a nice sense of time and place, but somewhere along the line - surprise - the slats open up. It's a deceptively simple bit of stage magic used cleverly and skillfully in conjunction with light and color throughout the production. When the slats are shut, and depending on how the lighting is used, there's a sense of intimacy, or of claustrophobia. When they're open, they let in the world, they create dreams, they remind you of prison bars, they give you the sky. 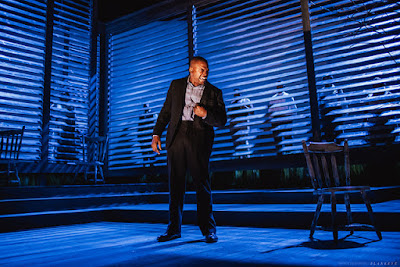 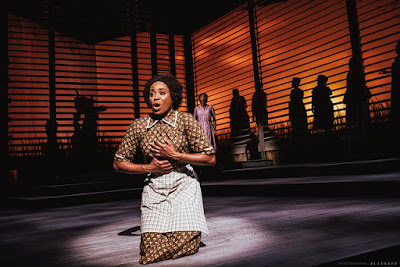 Color, light, shadow, and set are all used with precision and with beautiful variation. I'd go see the show again just to track the visuals so expertly designed and executed by scenic designer Tony Cisek and lighting designer Peter Maradudin.

And there's one more surprise that happens with the set at the end that's pretty fantastic. My friend, watching beside me, later told me that as this last surprise was starting to happen, he turned and watched my face, looking for the moment when it would dawn on me, too. I want to talk about what it was and what it means, but no. I'm going to dispense with the spoilers and keep that one to myself.

The Color Purple is a wonderful production of the classic about womanhood, sisterhood, and redemption. It's playing at Portland Center Stage through October 28th. More information is here.

Photos by Patrick Weishampel/blankeye.tv courtesy of Portland Center Stage at The Armory.

The poster art is by Mikey Mann.

Captions are wreaking havoc with Blogger's spacing, so I'm going to include them below:

Photo one: (L-R): Felicia Boswell as Celie and Danea C. Osseni as Nettie

Photo three: Chaz Lamar Shepherd with members of the cast

Photo four: (L-R) Felicia Boswell as Celie and Danea C. Osseni as Nettie with members of the cast

Posted by Gigi Little at 1:07 PM No comments: