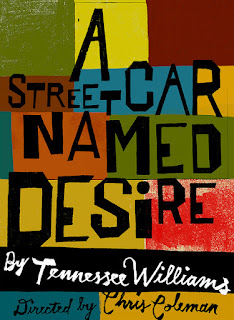 It took some adjustment for me to appreciate Deidrie Henry's Blanche DuBois in Portland Center Stage's production of A Streetcar Named Desire. At first, I kept thinking, what is all this seeming strength, this brashness, from a character who is designed to be fragile, a character Tennessee Williams described as, "daintily dressed," and with, "delicate beauty," and: "There is something about her uncertain manner, as well as her white clothes, that suggests a moth."

Deidrie Henry's Blanche is no moth. To me, she is much more butterfly, always moving, as, yes, all of those with wings do, but with more color. Literally and figuratively. More vitality. She delivers her lines beautifully but without any hint of "uncertain."

Now, the thing you need to know about me when I make statements like this is that I have it bad for Elia Kazan's 1951 film of A Streetcar Named Desire. I could drink that movie for dinner and then just spend the rest of the night lying on the bed in luxurious despair. In fact, I think I'll do that tonight. The lovely, heady melancholy, the poetry of the dialogue, the mood. The lush, beautifully tawdry, full-of-longing mood.

Portland Center Stage's production gets right to the heart of that mood. Tennessee Williams' world is a very particular mix of reality and dreamy, steamy unreality, and the set feels perfect: cramped, unkempt two-room apartment with a wrought iron balcony hanging overhead. Battered metal trash cans on the "street," the hint of dark alleyways. Stella and Stanley's flat feels tight and claustrophobic, but at the same time, the walls are like some beautiful gothic lace that allows us to watch the scene inside but also see through to Williams' dank, little corner of New Orleans outside: couples fighting, couples necking, the enigmatic flower woman calling, "Flores para los muertos..." The fact that the set never changes reinforces the feeling of being trapped, as does the lighting, full of deep blues and streetlamp golds and shadows.

In the midst of all this Williamsesque atmosphere, I was surprised at how much humor is in Portland Center Stage's production. The same lines that feel moody in the film and in other play productions I've seen rang with a nice humor, especially those delivered by Kristen Adele's Stella, who has spot-on timing.

Blanche, too, delivers some humor, which again brings me back to the disorientation I had about the way she's played. She just doesn't seem broken. I expect a Blanche who is fragile and cracked and ready to crumble.

But in a play that is so iconic that modern productions rarely surprise (or try so hard to that they get gimmicky), here's the surprise that I took away from Portland Center Stage's version. And I found it in moments like the scene that ends the first half, when hope and intimacy strip away Blanche's facade and she tells Mitch the story of the greatest loss and shame of her life. Her voice, her whole delivery changes. We see the fragile.

We see it again in what I think of as this scene's counter-scene, when a disillusioned Mitch pulls Blanche's paper lantern from the bulb and threatens to look at older-than-she-wants-him-to-know Blanche in the full, unforgiving light of reality.


Here, again, is that surprise of a fragile Blanche. And that's what's so effective about Deidrie Henry's performance. Suddenly we find something very real in the midst of our Tennessee Williams dreamy-steamy unreality: the fact that so much fragility can be locked up inside the lies of strength we tell about ourselves, and that no matter how well we lie...

"I don't want realism. I want magic! Yes, yes, magic! I try to give that to people. I misrepresent things to them. I don't tell truth, I tell what ought to be truth. And if that is sinful, then let me be damned for it! —Don't turn the light on!"

The show runs through June 19 on the main stage at the Gerding Theater. More information is here. Thanks to Patrick Weishampel for the photos.
Posted by Gigi Little at 10:53 AM 2 comments: