a moment in the day: ready

I head to our front door, to go out into the world, to pick up something for work. Stephen follows to say goodbye.

These weird days, when we go out so seldom. When every simple excursion feels like an event. Something you've got to plan for, dress up for, think about. It's been so long since going out into the world was a regular thing.

I pat my pocket to make it jingle.

Raise the crumpled bit of cloth in my hand.

Look at my sock feet.

Posted by Gigi Little at 4:54 PM No comments:

Recently, I finished the book cover design for a novel called Quint. It's based on the lives of the Dionne Quintuplets and is written by an author named Dionne, a fact that somehow I didn't even notice when I was first talking to 7.13 Books editor Hasanthika Sirisena about the project.

I knew of the Dionne quintuplets from features I used to see of them very early in their lives when I was paging through newspaper clippings and microfilm, doing research for an abandoned book project years ago. 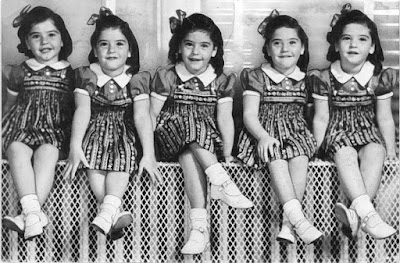 Dionne Irving's novel takes the lives of its quints, the Phalene Quintuplets, from their birth through... well, let me let Hasie's words, from an early email detailing the project, explain it:

Told from a variety of narrative perspectives, the novel, set starting in the 1940s details the quintuplets’ birth, their removal from their parents’ home and their rise to fame, which coincides with the construction of Quintland, a “theme park” where thousands of paying visitors observe the girls as they go about their daily routines—playing, bathing, eating, sleeping—performing their lives more than living them.

The idea of a theme park dedicated to you, celebrating you, imprisoning you was so powerful that I knew it had to be part of the imagery for the cover.

As for visual style, Hasie and Dionne were interested in the cleanness of silhouettes and cut-out art, like that of artist Kara Walker. 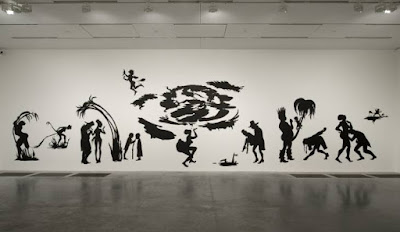 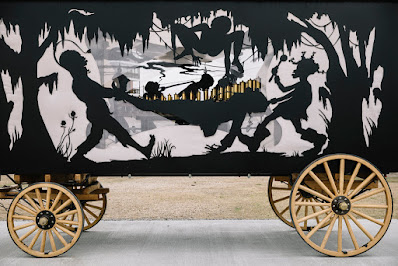 You can check out more about Kara Walker here.

I loved her art and the idea of cut-out silhouettes and started gathering fodder for my own silhouette vignette representing the book and its stars. The five sisters would be front and center, of course, surrounded by the trappings (pun intended) of their amusement park. I pictured the fancy entranceway to the park with maybe the book's title emblazoned across the big welcome sign. One of those ornate, old signs like this one I found: 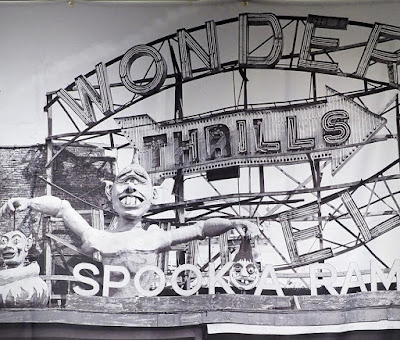 Without the severed-head-wielding cyclops, of course.

And below the entryway sign and surrounding the quints would be the ghoulish, delighted faces of the public. Oversized, carnivallike. Claustrophobic.

In looking online for examples for my Quintland entrance, I stumbled upon photos of the actual Quintland where the Dionne Quintuplets lived and performed their lives before the public.

Oh my god, it was a real place!

I'd had no idea. I thought the amusement park was the author's own invention. I gathered some of the pictures and put them into a file folder, mostly to just have them, because wow. I named the file folder oh my god, it was a real place. 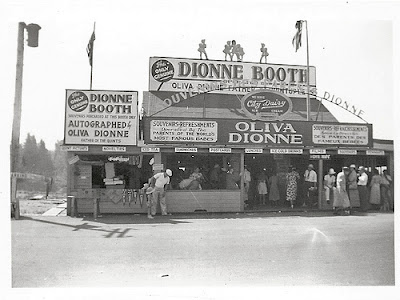 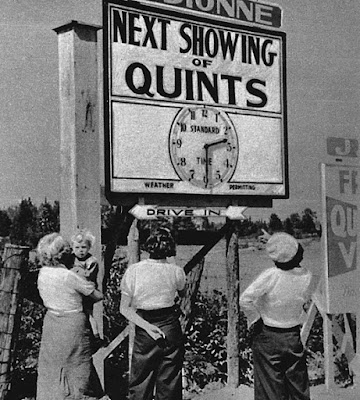 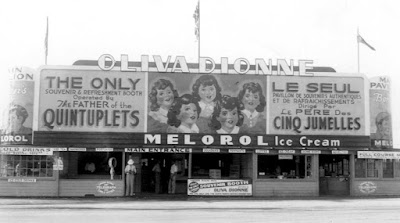 My first version of the cover had the girls represented as older. In talking back and forth with Hasie, I'd asked what age would be good and she suggested pre-teen. I found photos of a girl of that age in various different positions to use as I drew my silhouettes out in illustrator. 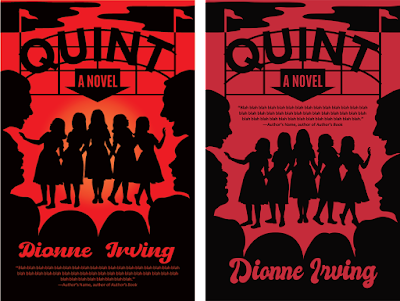 When I sent off the early samples and Hasie sent them on to Dionne for her look, Dionne preferred younger sisters. I went back and found a girl of five to use as my model. And I added in the big hair bows the Dionne sisters used to wear all the time—sort of a signature look in their younger years. 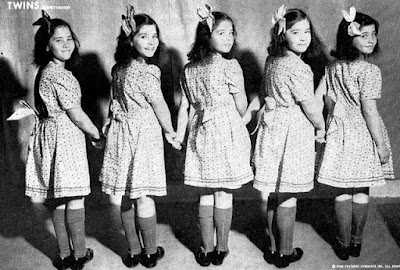 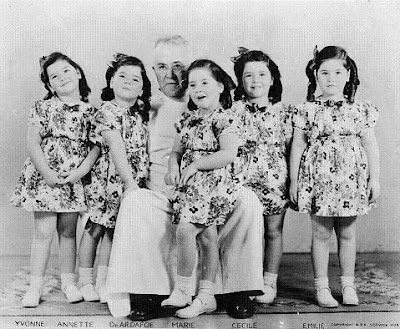 Hasie, Dionne and I talked a lot about color, about placement of the giant faces of the public (how close in or far away from the girls to put them), and Dionne asked for a more straight-up font for her name. They liked the light behind the girls and I added a hint of light behind the sign/title as well to bring it out. And we finally had a cover we liked. 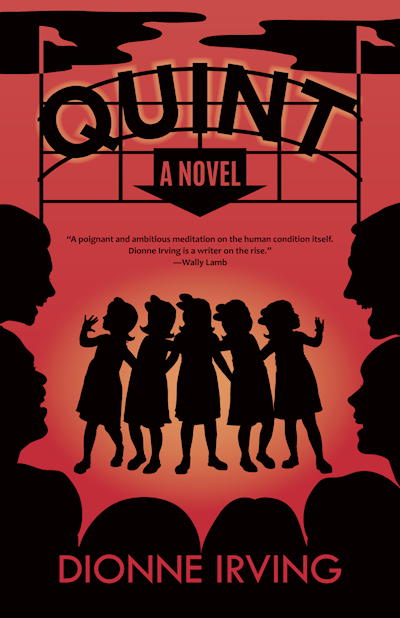 Quint will be out on August third. More info on this book and others in the 7.13 lineup can be found here. Here's an excerpt from the opening of the book.

When she started bleeding, she thought for certain she’d lost the child. The blood was bright red, the kind the midwife had warned her about. The kind that meant surely this child, like the others before it, had died inside her. Again, her body had failed her, had shown her that she wasn’t really a woman. In a month or so, he would climb on top of her and do it again. And she would get pregnant again. And they would do this bebe/non bebe ritual again. At least that’s how it’d been before. She looked to the picture of the Virgin on the wall and was reminded of how Notre Dame had failed her time and time again.

So, she was surprised an hour later when after she had hoisted her mass into the kitchen for water, she felt that flutter. The hint of an elbow or knee, she couldn’t be sure, pressing against her from the inside. That thing that told her that this was life. She looked again to the picture of the Virgin Mary hanging over the bed. She could see her from the sink, like the virgin was calling to her, like she was beckoning her and she floated, wet hands, back onto the bed where she spent most of her days.

The next thing she remembered he was shaking her, and, when she opened her eyes and saw him, her husband, standing there, it was like she had been waiting for him all her life. Or at least waiting for someone like him.

“Are you alright?” he kept saying and then finally, “Answer me!”

But she couldn’t get up, couldn’t sit up in the bed. She remembered the blood and her hand flew between her legs. She drew that hand up to her face to inspect it for any hint of red, but there was none.

“What is it?” he asked. The hard edge in his voice gone. He sat at the end of the bed smoking a cigarette and watching her.

“There was blood today. Earlier. But I think I felt the baby move after that.”

He stared at her with large, unblinking eyes and she couldn’t tell what he was thinking, or what he understood.

“This happens with the cows too.” He dropped a bit of ash on the floor, and she tried to imagine when and how she would be able to clean it up. “Sometimes they bleed a little at first, a little blood, but then later on, a perfectly healthy calf.”

There were only two rooms in the little house, and it felt like his? cigarette smoke filled them both. She wanted badly to open a window, to breathe in clean, crisp January air that cut right through her lungs in a way that both stung and felt delicious.

He got up finally and went into the front room, lighting a second cigarette on the stove, a wedding present ordered from Sears & Roebuck. It was the newest thing in the house and took cords after cord of wood to heat. And while the house was wired for electricity, money came too infrequently to keep it on regularly.