I've been working on a writing project about glaziers in the U.S. - a subject I didn't know much about before now. In fact, before a couple weeks ago, I probably wouldn't have known that glaziers work with glass at all. 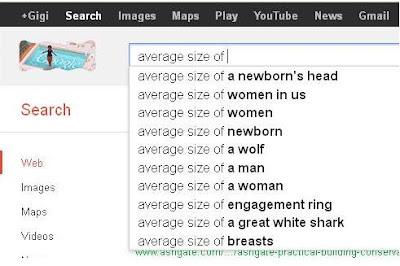 nicholas on day four after the surgery

It was early evening, and Nicholas had just gotten up from a nap with the man who calls him Dog. Nicholas had been feeling bad lately, and he didn't know why, but whatever was making those pains in his stomach, the humans must have it too, because they sure had been looking worse for wear. He didn't understand why, if the humans had it too, they didn't have to wear the awful plastic cones around their heads at night. That thing was the bane of his existence - well, one of the banes - and it sure made it hard for him and the humans to sleep. Today in another trip to the animal waiting room, they'd fitted him with a different cone, which was soft and fabric instead of hard plastic - and blue with a white trim. The humans seemed excited about this. Nicholas wasn't sure he liked this new cone any more than the awful plastic one, but at least it looked nattier.

Now, the woman with the lap came into the living room from the back. She rubbed her eye and said to the man who calls him Dog, "I think I slept for two hours."

"You slept for four hours," said the man who calls him Dog.

In a little while, the woman with the lap put Nicholas' green harness and leash on and took him out for a walk. When she set him down on the pavement, he stepped lively down the sidewalk, happy for the fresh air and the distractions of smells everywhere. He led and the woman followed. At the forbidden flowerbed, he turned and walked up the blacktop toward where the car was parked.

"Where you going?" the woman asked.

Nicholas shrugged in a dog way and came back down to the sidewalk. He'd been to the animal waiting room so many times, he figured that must be where they were going.
Posted by Gigi Little at 5:24 PM 1 comment:

a moment in the day: vibration

Nicholas vibrates on my lap at five in the morning. At five-thirty in the morning. At six. He shivers, then jolts and tries to lick his sutures. Shivers, then jolts. I hold fast around his chest and wait for the struggle to go back to vibrate. Every time we go to the animal hospital, every time we call, they say he's doing well, and we try to believe this is all just a part of healing. Somewhere between being awake at three and five, I dreamed of birthday cake. He jolts, then shivers. Through the open window, the world vibrates with rain.
Posted by Gigi Little at 6:26 AM 1 comment:

a moment in the night: another trip to the animal hospital

I don't know what time it is. Ten? The place is packed, and I'm feeling so guilty for bringing Stephen and Nicholas out here again that I can hardly look at Stephen. Well, it's the guilt and the lack of sleep for the last few days, I guess. I hunch over Nicholas curled shaking on my lap and I feel like I can't lift my head. Stephen's just as concerned that we make sure the redness and puffiness at the incision area is just irritation and not infection and that the odd behavior tonight, the sudden jumps Nicholas makes as if bitten, are, again, irritation and not something worse - but I can't stop feeling like the bad mother I would have been had I ever had children. Like some stereotypical hysterical woman. These are all selfish feelings and do nothing for Nicholas.

The lobby of the animal hospital is full of people and animals. A cat in a carrier. A big yellow dog with a wounded ear. A hamster in a plastic ball. On my lap, Nicholas breathes in little waves of shutter as we wait for his name to be called. To our right, sitting on the ledge of the long, padded booth is a forgotten sippy cup.
Posted by Gigi Little at 9:43 AM No comments:

That moment when Stephen took Nicholas off the leash at Strawberry Island, the world around - the trees and the hiking trail, the tall, waving grasses - all turned to ocean. The slip and slide of an undertow. I wanted to be a pragmatic parent and be OK with letting him run free, but when the leash came unhooked and his little dog feet touched the trail, I felt like he'd just bolt and be gone. 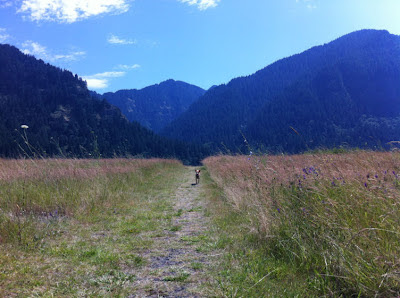 The hike was Sunday, Stephen's birthday, and Monday night was the baseball game, Stephen and me along with a crew of O'Donnells, sitting in the bleachers watching nephew Micah play. Nicholas was curled on my lap. Somewhere in the middle of things, he jumped up, shaking, stepped from my lap to Stephen's, stepped from Stephen's lap to my mother-in-law Mary's, and gave her just time enough to comment on how sweet it was the Nicholas had come to see her - before he threw up on her purse.

The first of many times over the next couple days. [Not all on Mary's purse.] Late that night we sat bleary at Dove Lewis, the animal hospital, moving from one side of a plastic padded bench to the other as the orderlies cleaned up after Nicholas. The doctor felt his stomach and lymph nodes. The doctor took him for tests. The doctor told us salmon poisoning is fatal but he only has a couple of the symptoms associated so we're not too concerned about that. We got very concerned about that. We were there until about twenty til two and then took Nicholas home with some medications. The three of us in bed, Nicholas curled under the covers with his head warm against my leg, the tick of his eye against my skin. I lay and wondered if what I was feeling was REM sleep or a waking dog closing and opening his eyes. I closed mine and tried to sleep. Stephen started to snore.

The next day, on about four hours sleep, I sat at my desk at work, trying to get my brain to run right. Everything felt a little floaty, a little prickly, a little scary and emotional. Stephen called with updates from home, Nicholas not taking food, Nicholas not wanting to go out for walks. I shifted and crossed my legs, and the hug of one leg around the other felt like an embrace. For a moment, my sleep-lack-addled mind turned the feeling of that leg hug into a dog hug and I worried, what if I never hugged him again.

Wednesday after more trips to Dove Lewis (including an overnighter) and more tests, they finally discovered that there was something lodged in his intestine. I went home from work early, and Nicholas was taken in for surgery. Now Friday, he's doing well (though really not liking having to sleep in the E. collar (or, as the surgeon called it, "party hat") - but he's content to be home.


The surgeon told us they'd removed from Nicholas what seemed to be a shoelace. A strip of brown felt, she said. Back at home, we located the offender, and sure enough. So much worry and discomfort for such a small thing.

Yes, we have to do the day-after show-off of the birthday card. This time it's my card to Stephen. The painting of Stephen's that I used is owned by the gallery owner of Winston Wächter Fine Art in Seattle. Note the mouse sneaking into the hairdo. 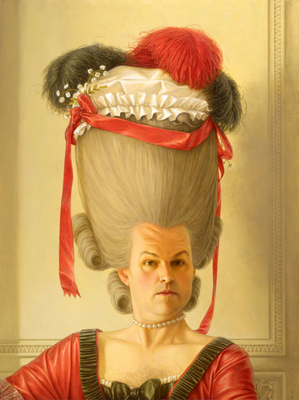 The outside of the card. 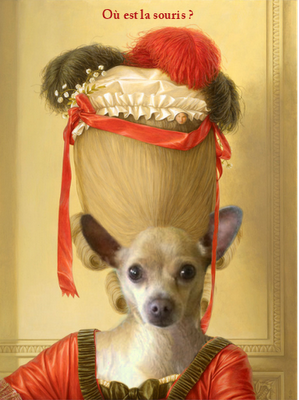 The inside of the card. 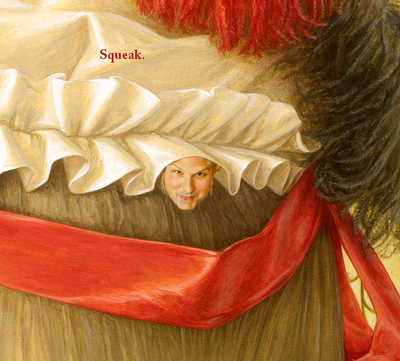 a moment in the day: claro que si

Stephen is speaking Spanish to Nicholas.  Holding him close, up to his face and purring Spanish against his furry  neck.

Not what does it mean but what does it literally translate to. Because I know que and I know si and I know what the phrase means, but I don't think I've ever looked up the literal translation of the phrase. When I was a kid, we had a live-in housekeeper named Carmen, and we picked up some Spanish from her. To reinforce this, Mom sent us to a Spanish class for a while. But when I got around to learning languages in school, I chose French since we were ancestrally French and my name was French and Noni and Coco used to speak French at the dinner table when they wanted to say things the grand kids couldn't understand, and sacré bleu, how romantic would it be to speak French as a secret language.

Sadly, French pushed Spanish out of my brain and then jumped out behind it.

Which, when it comes down to it, does mean what I picked up as a meaning when Carmen used the phrase all the time when I was a kid. Strange to realize that I knew, really knew, what this expression meant, without having been told and without knowing the translation. Just from the context of her use.

Language is a remarkable thing.
Posted by Gigi Little at 10:07 AM 2 comments: