Forest Avenue Press' next short story anthology, City of Weird, is a collection of thirty weird fantastical stories, all set in Portland, Oregon. 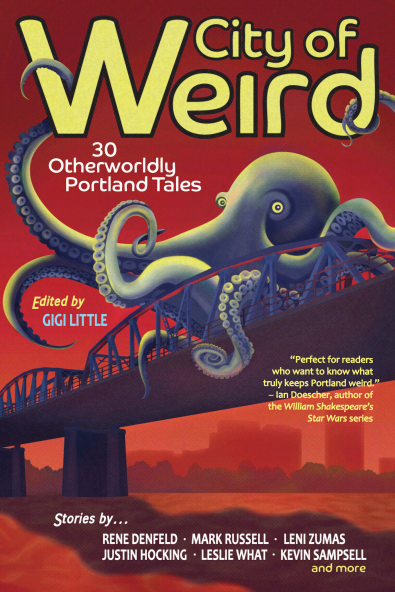 I've been obsessing over the cover for this one. Not only is City of Weird a book I edited, but I wanted the cover to be reminiscent of something I love, those old pulp magazines like Amazing Stories and Weird Tales. 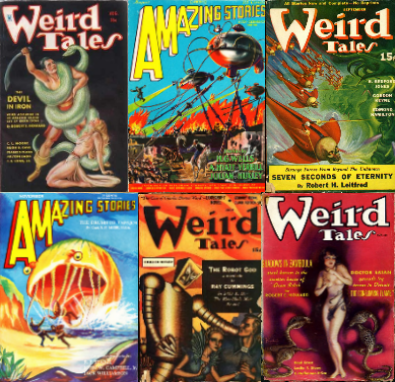 What would have been incredibly fun would have been to tinker around with some of those old covers and create the illustration from that, but for something professional, you can't just alter undersized or copyrighted material (the above little images are from Wikimedia Commons), and I, of course, wanted something all my own, so I decided to build it.

I thought it would be fun to show off just how primitive an image like this starts out. I began by building the bridge out of shapes in Illustrator. 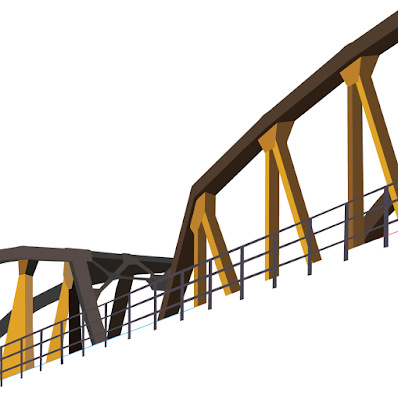 Color was something I dealt with later. I knew I'd want something more atmospheric than grays and browns, but those drab colors made it easy to keep the pieces straight. 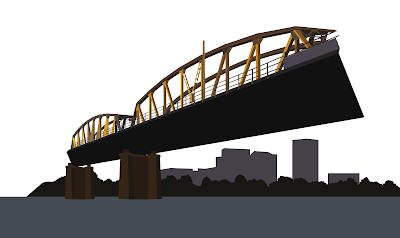 Once the bridge and background were laid out, I started building the octopus. Early steps in tentacle-making: 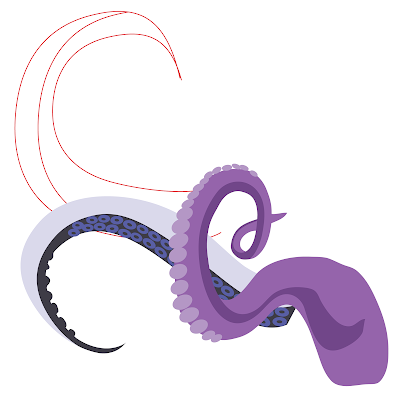 Again, willy-nilly on the colors. 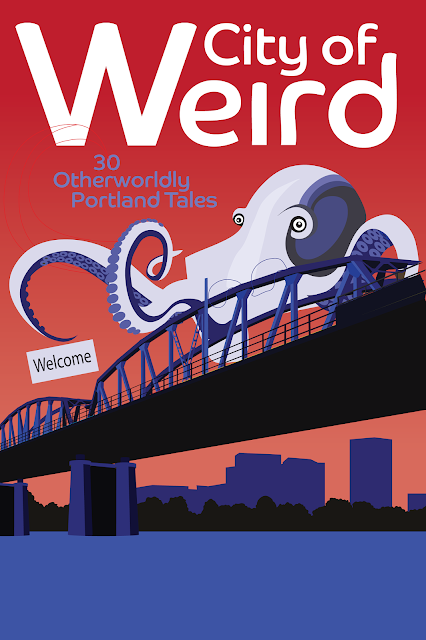 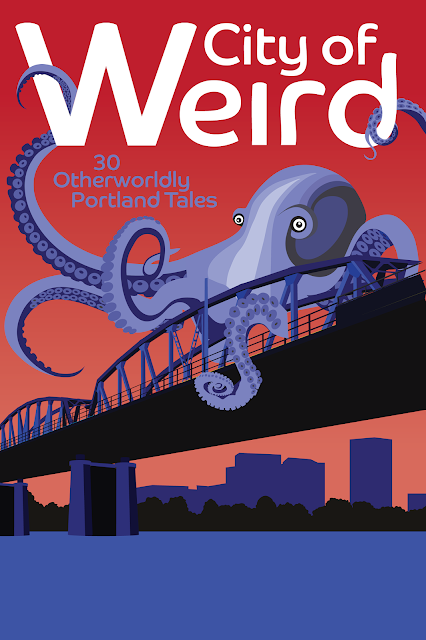 Then from Illustrator to Paint Shop Pro to start the shading process. 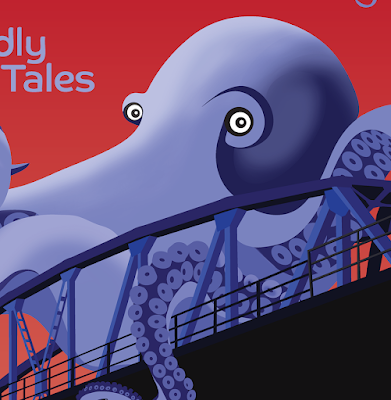 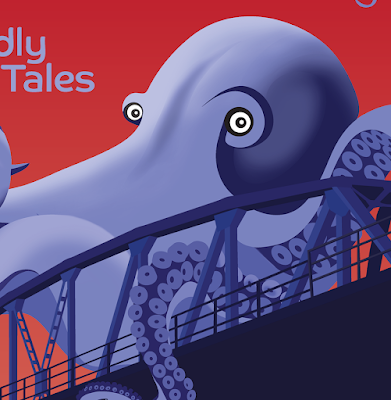 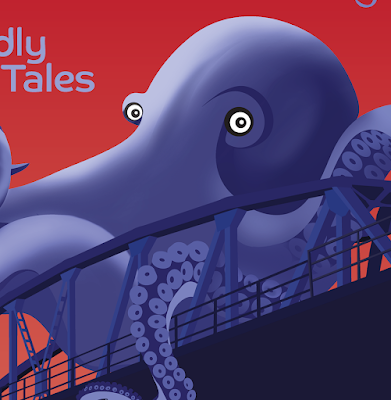 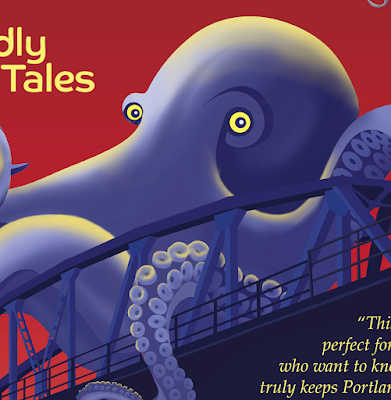 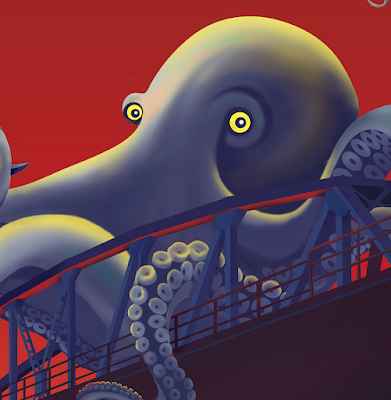 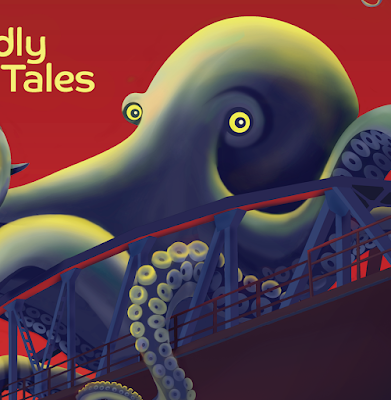 And finally textured and halftoned: 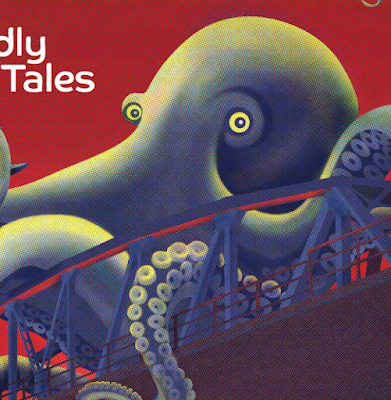 
I was another kid obsessed with David Bowie in high school. Modern Love was popular but my little group of friends, we listened to Ziggy and Aladdin Sane and Hunky Dory. Tricia and Mark used to pretend they were from another planet called X-Squared where you had purple hair and blue skin or was it blue hair and purple skin, and somehow the portal to this world had something to do with listening to Heroes. I found the planet game annoying, but I loved to lie on the floor in my room with Mark and listen to the songs and discuss them, and as a perpetually shy and nerdy kid, I felt proud of being a fan of someone so... I don't know, so great.

We saw him live at Angels Stadium. They covered the playing field with a vast false floor and filled the place. Every one of us down on the floor stood on our chairs through the entire show.

I think I saw him live once a year for most of my adult life, or at least every tour he did, up through Tin Machine when I left the circus and stopped seeing live shows much. Like Mark, who was my friend and then my best friend and then my boyfriend, my ex-husband had a huge thing for Bowie. I'm trying to remember how far we drove one time to see one of those concerts. Something like three hundred miles one way, and we drove it there and back to the circus in one day. My ex had a blue satin jacket that said MTV on it and, as always, he tried to get the back stage manager to let us back stage by claiming that he was a show promoter. Sometimes it worked, but with Bowie, who he wanted to meet most of all, it never did.

It's a weird world where it's possible for David Bowie not to be in it. Oddly, he's mentioned in two of the stories I edited for City of Weird, and is one of the only celebrities mentioned in the book. I could keep jabbering on, but I don't need to talk about all his amazing musical innovations, his way of reinventing himself, the many ways he affected our culture. Everyone else out there is doing a great job at that. I just want to think of lying on my bedroom floor listening to music that opened up that big high school wonder in me like almost nothing else did.
Posted by Gigi Little at 12:44 PM 2 comments:

a moment in the day: sidewalk


I'm stepping carefully down the sidewalk that, yesterday, was so covered with ice that I couldn't leave the house. When I say "carefully" I mean embarrassingly carefully, especially since most of that ice and slush is gone, but it's six in the morning and I don't trust what I see in the streetlamp glow, the slick spots along the pavement, as I make my way to the bus stop for work.

Halfway down the block, and I can't look back, because if I look back I'm just sure I'll take a header into those ice-encrusted bushes, but I don't have to look back to know he's still at our front door, watching. Had me wake him up, even though it's his day off, just so he could stand there cold at the front door and watch me all the way to the bus stop. My ally. There's no way to ever fully acknowledge how important that is, the way he's my ally.

On my lunch break, I will buy him two gluten-free peanut butter cookies.
Posted by Gigi Little at 12:46 PM 1 comment:

a moment in the day: building


Sitting at my computer unshowered on a Saturday, tinkering with the front cover for the book City of Weird. I'm so deep inside that place that I don't see the room around me, or the clutter of papers on my desk, the jacket I left on the floor, only this deep, dark fantastical world I'm building out of pixels. Reds, blues, yellows, shading and shadows. World-building makes you a kind of god. Right now, I'm building a city, I'm building a monster.

Click of my mouse, and over that, the hammering of a fellow world-builder. Bradley K. Rosen is in our backyard, putting French doors on the garage that's going to be Stephen's artist studio. I like that Brad is building the opening through which Stephen will be soon doing his own world-building.

I also like that the power is on. I need electricity today. Last night, luckily just after we'd finished watching a movie, the power went out due to high winds. The entire neighborhood dark. I walked Nicholas in the frozen front yard. The wind was a freight train through the trees and Nicholas kept moving in and out of the little glow from my cell phone flashlight, appearing and disappearing in the black, tail tucked, not happy, still taking his time to find just the right place to pee. I had the leash around my wrist and squeezed hard in my hand but I still felt like he would slip from my fingers and be gone.

We went to bed wearing extra layers, listening to the wind and to the world flying apart outside.

This morning, walking Nicholas again, in the light, I surveyed the damage, such as it was. The garbage container was overturned and the plastic wheelbarrow. There was a thin sheet of metal that used to be attached to the fence between our house and the neighbors', loose and flapping in the breeze. But the tiny pumpkin, healthy and left over from Halloween, is still sitting on the porch.
Posted by Gigi Little at 12:57 PM 5 comments: