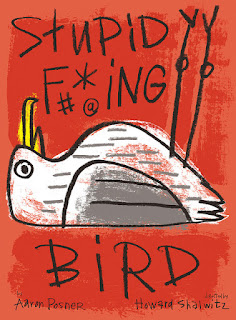 The play I saw last night was desolate, full of disillusioned, heartsick characters railing against their empty lives and the excruciating futility of all of human existence.

I can't remember the last time excruciating, heartsick desolation was so fucking funny.

I'm dropping the eff-bomb in honor of the title, of course. Stupid Fucking Bird at Portland Center Stage was full of fucks - in fact, at intermission, a man sitting in front of me remarked to his wife, "I've never seen a play where they used the eff-word so much." I wonder if Anton Chekhov ever used the eff-word - well, or the Russian equivalent. My guess is, only in subtext.

To say Stupid Fucking Bird is an adaptation of Chekhov's The Seagull would be going a bit too far. It uses The Seagull as a skeleton to build its own particular story around. But even with the very different flesh and hair and that outfit Chekhov never would have worn, the body built by playwright Aaron Posner (who gave us, among other things, that fabulous adaptation of Sometimes a Great Notion a few years back), walks around with the same gait.

(No, seriously, it's hilarious.)

And the question of what becomes of us when we make theater of our lives. This is what the characters in Stupid Fucking Bird do - not surprising when they're actors, playwrights, screen writers. They dramatize their personal misfortunes and play those dramas out as if on stage to the point that one character finally asks the group at large if they actually feel all the feelings they think they feel. 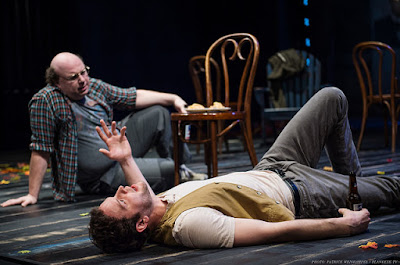 Some context: Dev the tutor loves Mash, the cook. Mash loves Conrad, the playwright. Conrad loves Nina, the actress. Nina loves Trigorin, the writer / screenwriter. Conrad blames all the ills of his life on Emma, his mother (another actress), who is also dating Trigorin, who has fallen in love with Nina. You don't have to remember all that, but you get the picture. Rounding out the cast is Emma's brother Eugene, who is often the voice of reason during the gnashing of teeth of the various lovelorn and often histrionic characters.

Not only are the gnashing of teeth and histrionics very funny - they're often cathartic. Who among us hasn't wanted to scream out our frustrations on a proverbial stage now and then? 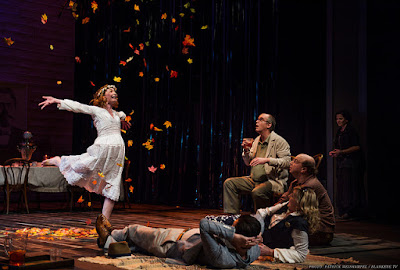 And the proverbial stage and the literal stage come together in very interesting ways in Stupid Fucking Bird. During the first act, there is a play-within-a-play, in which we, along with the show's characters, watch as Nina performs Conrad's new theatrical work, an existential monologue he hopes will transform theater but which only succeeds in falling apart under the jeers of his audience. I always love the device of the play-within-a-play, but Stupid Fucking Bird is also a play-all-around-a-play, with the characters breaking the fourth wall to talk directly to the audience about how they're in a play and we're watching. It's fascinating to clock all the many ways Posner and his players explore the theme of art and theater and the ways it relates to life.

And those players. I usually try to highlight who I think are the standout performers in a show, but with this cast - Ian Holcomb, Kate Eastwood Norris, Cody Nickell, Charles Leggett, Kate deBuys, Darius Pierce, and Kimberly Gilbert - each one was a standout, each one, I daresay... wait for it... fucking great.

Stupid Fucking Bird is playing at Portland Center Stage through March 27th. More info is here. Thanks to Patrick Weishampel for the photos.