It's been a month since Stephen's fall. A month of lying on his back with his leg up, of physical therapy, of worrying, of enduring not being able to paint. For me, a month of taking care. On the weekend, I ran down to the Chinese restaurant and got us takeout, which was luxurious because Stephen hadn't been really feeling right enough for a long time to care about having a treat. Dinner came with three fortune cookies.

Mine: A small act of charity will go a long way.

Stephen's: Keep up the good work. You will be rewarded.

Nicholas': You will be traveling and coming into a fortune.
Posted by Gigi Little at 6:27 AM No comments:

a simplified map of the real world: the galley

Here's a quick sneak peek at the galley for Forest Avenue Press' first fiction acquisition, Stevan Allred's linked short story collection A Simplified Map of the Real World. For anyone who doesn't know what this is, a galley (or advanced reader copy or ARC or uncorrected proof) is the pre-publication edition of a book, something that goes out to magazines and other publications in hopes of reviews or to bookstores in hopes that the title will be carried there. A galley is also a great tool for the publisher to use in order to find any last minute errors - hence the "uncorrected proof" designation.

Some galleys look like the finished product, just with extra marketing info on the back and a stamp designating it as a galley somewhere on the cover art. Others have mostly blank front covers with just title and author shown. I like the ones that fall in between, that show the cover art but smaller than actual size so that when the final product is unveiled, the impact is splashier. 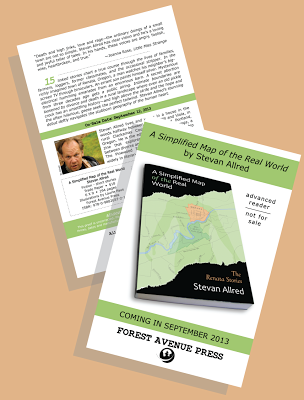 For more information on Forest Avenue Press and A Simplified Map, you can check out their website here.

Posted by Gigi Little at 6:48 AM No comments:

a moment in the day: post-op


It's the day after the surgery. Evening. Stephen's in bed with his leg in the brace and up on piled pillows. It's late but he hasn't eaten since he's been nauseous and somewhat heart-burny, maybe because of the pain medication, maybe because of all the lying on his back. On the TV is Montgomery Clift in a priest costume. We've paused the film to tend, again, to the after effects of Stephen's fall of two weeks ago. Ice pack for the knee. Ice pack for behind his back since he threw his back out somewhere between the first and third physical therapy sessions. Water for the latest thing, the twelve-hour bout of nearly ongoing hiccups.

I hand him the glass. He takes it with his good hand - which is the sore hand but at least not the one connected to the broken elbow.

"So, my nose is getting stuffed up, too," he says.


A little memory moment for Mother's Day. This is from my diary, September, 1985. I was sixteen. Frank would have been just nine. Horatio was our dog.


I was feeling really sick Sunday night. Mom & I were watching the T.V., she on the couch, and I on the floor. “Death of a Salesman” with Dustin Hoffman which was well done but depressing as hell.

Frankie got a hug from mom because his teeth hurt, and I wanted one, too. I came crawling over to her, feeling just like Horatio. When Frankie was gone, I got a cuddle from Mom. Oh, I could just feel the mother, daughter love we had between us. I remembered that feeling from times long ago when, as a younger child I got cuddles, and the feeling brought tears to my eyes. I must have looked really funny, my legs curled on the floor, half teenager, half child. I thought for a moment about having lived with her all my life. It was one of the best feelings in the world.
Posted by Gigi Little at 11:30 AM 2 comments:

nicholas and the injured man


At first, Nicholas wasn't at all sure he liked the situation. When the man who calls him Dog came through the apartment door wearing the robot leg and with one arm in a sling, Nicholas didn't like that robot leg and barked at it. It was black and full of big hard plastic parts and straps and went all the way from the man's thigh to his ankle, and Nicholas suspected that this wasn't really the man at all but a cyborg lookalike.

The woman with the lap was running around the apartment grabbing weird things like frozen blue ice bags and rattling pill bottles. She put the man in the bed. The man used all the pillows in the house, which wasn't fair, because those pillows belonged to Nicholas.

Nicholas was polite and didn't say anything.

But then, there next to the man's ankle on the pile of pillows was a patch of sun. The man smiled a tired smile and patted the bed beside him, and Nicholas made one short, efficient jump up onto the pillows. Making sure to be careful, Nicholas curled up in the sun next to the man's foot and closed his eyes.