When I was in Japan years ago, I loved to chuckle over the various translation mashups between Japanese and English that were everywhere—on billboards and signs, on products you bought at the store. Just down the street from the hotel where I stayed was a pachinko parlor with a huge sign reading “Orympia” in electric lights. A bag of potato chips with some sort of curry flavoring was named, “Ethnican Tasted.” A shopping bag came decorated with a cartoon of an elephant and the words, “I TonTon. I pretty elephant. Love me well.” 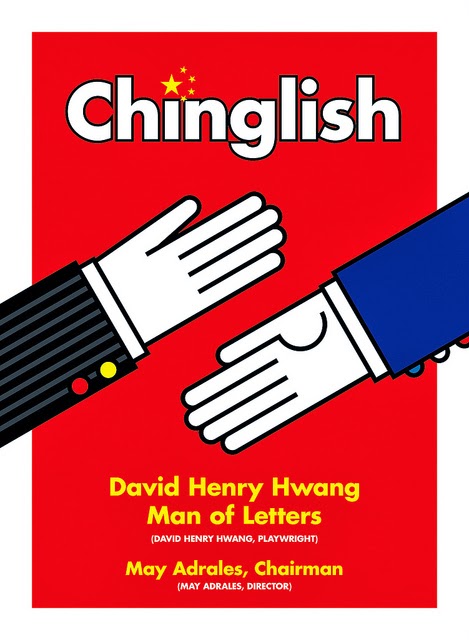 In fact, I’m so used to thinking about this type of accidental poetry in terms of Japanese, that I had to remind myself, as Stephen and I sat in the theater Saturday night, that the play we were about to see, Chinglish, was about China, not Japan.

But, of course, mistranslation happens everywhere. It can be charming, confusing, sometimes beautiful, often hilarious. At times, hazardous. David Henry Hwang’s play Chinglish explores the issue of mistranslation in its many forms, from the funny to the political to the deeply personal.


Portland Center Stage’s production had a strong cast of funny, versatile actors. I really liked the set design: somewhat minimalist, offering just the right details to set the scene but allowing dialogue – language – to be the star of the show. The lighting was subtle, with moments of surprise drama and beautiful scene changes. The staging and lighting of Xi Yan’s monologue was especially lovely.

I think where this play shines is in its comedy. Hwang’s dialogue pings back and forth between English and Chinese, between language spoken out loud and language translated – well and not so well – on the screen over the stage, between statements misspoken and misunderstood – all of it as fast and snappy as the dialogue in some of my favorite 1940s black and white Hollywood comedies. It's not just the writing. PCS’s actors delivered this dialogue with great timing. I particularly loved the delivery of Rachel Lu as Miss Qian in act one. She was so funny, I think I’d see the play again just to watch that scene.

I know I keep saying that word, but there you go.

At intermission, Stephen mentioned that he felt the writing was a little convenient, characters misunderstanding each other when it was best for the comedy and then understanding each other when it was best for the drama. This happened most notably in the relationship between the main characters, Xi Yan and Daniel Cavanaugh. At first I thought, this was just the inevitable outcome of a story like this one. As the plotline moves along and the stakes get higher and the comedy starts turning into something more serious, wacky misunderstandings can get in the way of the writer’s intended tone, mood, message during a scene. But it's also true that intimacy between people spurs on understanding, even when languages don’t match up. As Xi and Daniel get to know each other better, their communication becomes easier, clearer, more founded on nuance and shared experience.

It also becomes lazier. They start to rely more on what they think they know about each other than what they can glean from each other’s words. And that, of course, means trouble.

It’s what we do to each other all the time. Mistranslating, even within a single native tongue. Mistaking implications and ignoring subtleties and overlooking the fact that what a word or phrase means to me isn’t necessarily exactly what it means to you. My language, your language. My preconceived notions, your personal connotations. The story I’ve got in my head versus the story you’ve got in yours. I think what I took away from Portland Center Stage's production of Chinglish - beyond the rip-roaring good time - is the notion that, when people come together and try to do that complicated thing called communication, mistranslation is inevitable, and the only way around that is to really listen.

Chinglish plays now through February 9 at the Gerding Theater. You can find more information about it here.

Thanks to Patrick Weishampel for the photos.
Posted by Gigi Little at 12:54 PM No comments: