show us your shorts

Last night, Stephen and I went to Milepost 5 for "Show Us Your Shorts," an evening of short plays put on by PDX Playwrights. It was great fun - a mix of stories, themes and styles all united under four common prompts - which were not divulged to the audience. That was part of the fun - trying to figure out the prop, the line, the gesture and the unifying theme that were shared in all the pieces.(I got two of the four.) Think about how hard this is for the writers. You're given not one but four different elements (since the show is over, I can divulge: the prop of a rock, the line "it could be anything," the gesture of hands over the ears and the unifying theme of show and tell) and not only do you have to include all of these elements in your very short play (flash one-act?), but you must make them exist inside the writing organically rather than as prompt sore thumbs.

That's not all. Try coming up with this tiny complete play that incorporates all four elements - and then try getting up as an actor to present this play, along with other short plays, to a live audience. PDX Playwrights is a great group of writers and performers as well. The members who were a part of Tuesday night's show were Kate Belden, Brad Bolchunos, Gary Corbin, Jenni Miller, John Servilio and Sally Sunbear. It was an all-around good time, but for me the stand-outs of the night were "Could Be Anything" by Kate Belden and "Apostrophe and Rebuke" by John Servillio.

"Could Be Anything" was the most fun you'll ever have at the dentist's office. Totally off the wall - a smart, silly, neurotic conversation that snapped like the dialogue in old films from the thirties. I had no idea where this one was going, and I loved being in that particular confusion as the two characters bantered back and forth. Brad Bolchunos and John Servilio were the actors in the piece, and they were great - particularly John Servilio who had lovely timing.

"Apostrophe and Rebuke" was heady - that's the word I kept thinking. Heady in the sense of smart and heady in the sense of intoxicating with its mix of classical symbolism and celestial science - cut with one character's modern cynicism (and humor) - and finished off with a surprising sweetness. The dialogue and character development were laid down in layers like counterpoint in music.

The performance we went to was a local theatrical event, but PDX Playwrights meet on the first and third Thursday of every month at 23 Sandy Gallery, an art gallery located at 623 NE 23rd Avenue in Portland. Their workshops are open to the public. (!) If you're interested in attending a meeting, check out their website here for info and to RSVP.

As an addendum to yesterday's little review of Portland Center Stage's Sweeney Todd, Stephen had this to say on my facebook post:

"The other thing I didn't mention about Johanna's nice dress [when we were discussing it at intermission] is that it very closely resembles in color and form that worn by the marquise de Montebello in Winterhalter's grand portrait of the Empress Eugénie and her dames d'honneur. Coincidence? Good decision, however it was arrived at." 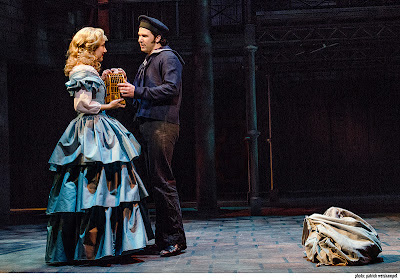 And the Winterhalter piece:


The marquise in question is the one in blue-green in the foreground.

And just for fun [and to show off], since I used this same painting in a Valentine's card for Stephen last year, here's me in the dress: 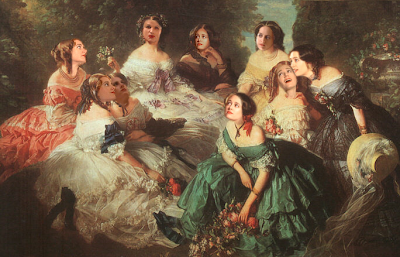 a night with sweeney todd

When I was sixteen I "wrote" a "novel" about vampires. Of course I did. It was supposed to be a comedy, and it opened on the moon. My writing mentor at the time told me he liked my scenes of suspense and suggested I try to turn it more into a scary story than a funny one. He said, you can be funny and you can be scary, but you can't be both at the same time.

I think what he was really saying was, you're not funny. But I spent years thinking on that statement, that you can be funny and scary but not at the same time. 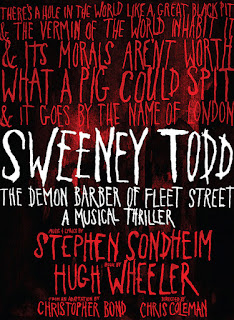 You can, of course, and a good example of this is playing down at Portland Center Stage. Stephen Sondheim's Sweeney Todd: The Demon Barber of Fleet Street proves that with some good casting and staging, with some big time coordination to pull together all the complex elements of the story and music, you can be scary and touching and tragic and ugly and beautiful and shocking and, yes, funny, all in one.

Sweeney Todd is a hard, hard musical to do. I don't say this from experience, of course, but it's a lot of show - particularly when it comes to the music. Dense, fast-paced and full of crazy harmonies and counterpoint. It's the complicated stuff that's my favorite in Sweeney Todd, and the ensemble cast pulled it off with relish.

I did not mean that as a pun, but now that it's there, I'm leaving it. Speaking of puns, one of the highlights of the show for me was "A Little Priest" which closes the first half. If anyone can pull off punning and make me laugh rather than roll my eyes it's Stephen Sondheim - but what made the number stand out for me was the great chemistry between Sweeney Todd (Aloysius Gigl) and Mrs. Lovett (Gretchen Rumbaugh). They deliver that number with the perfect mix of fiendish glee, and even though what they're punning about is murder and cannibalism, it's also kind of touching the way they enjoy this shared experience. 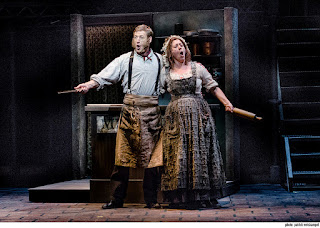 Both are really good in their roles. Aloysius Gigl plays Sweeney Todd with a balance that makes him sympathetic even as he's slitting throats - well, maybe not while he's in the act but at least while he's brooding over his burning need for revenge. Some Sweeney Todds I've seen have played their parts more on the crazy rage side of things, and that misses some of the complexity that the playwright Christopher Bond wrote into the role when he adapted this old, old story in 1973, and which Sondheim further developed when he created the musical in 1979. Gigl plays Todd in a way that makes him scary and at the same time deeply sad. Gretchen Rumbaugh's Mrs. Lovett doesn't have the benefit of fifteen wrongful years in the poky to give her character sympathy, but her unrequited love for Todd drives her motivation throughout the story as much as her ambition does. Rumbaugh is also quite funny. 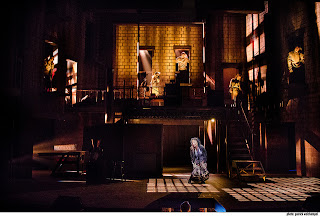 The set is nicely depressing and the harsh lighting creates a stark, shadowy world. Costumes got a thumbs-up from Stephen, my resident fashion history expert. At intermission, he said, "I approve of Johanna's dress." That's Rita Markova, pictured below, who sang her part beautifully and with nice humor. 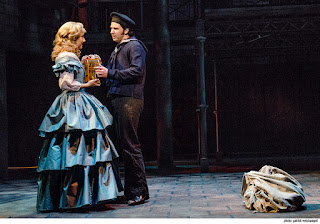 The production is bookended with street scenes of homeless people in what looks to be present day rather than the mid-nineteenth century, where Sweeney Todd takes place. At first I found it jarring when the time period changed as the show began - but thinking it through at intermission, I realized why it worked. Sweeney Todd is presented in the form of a legend. "Attend the tale of Sweeney Todd," the street folk sing in the introduction. Placing this opening in present day both helped cement the idea of the "lore" aspect of the story and brought a sense of the opposite - of reality - to things. Not to mention bringing home the idea that, as outlandish and horrific as the story of Sweeney Todd is, there are true horrors and true desperation on the streets everyday.

Don't get me wrong. It might make you think, but it's also, all told, a rollicking good time. It plays at the Gerding Theater from now until October 21.
Posted by Gigi Little at 1:07 PM 2 comments:

a clown from a small town 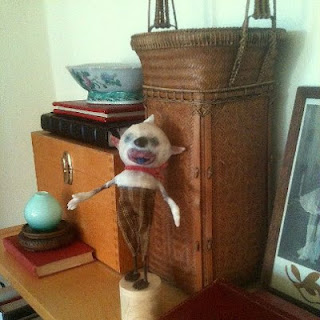 His hands are sculpted from felt and wax. His nose is basalt. His belly and his head are oak galls, which are abnormal outgrowths on oak trees, often inhabited by insects. His pants are sewn from a small piece of vintage fabric. His tongue is felt from inside a piano.

He contains story upon story. Maybe this is why Clown from a Small Town, the art piece we bought recently, has such humanity.

[it's also because of the humanity bursting from his maker, portland artist lisa kaser. take a look at more of her sculpture here.]
Posted by Gigi Little at 6:35 AM 3 comments:

a moment in the day: triage

It’s eleven at night in the ER. Stephen and I sit in the little glassed-in triage room. Just home from my writing group, I’ve got a sheaf of pages with comments all over them shoved in my purse, and Stephen’s the one with the blood pressure cuff around his arm and the weird plastic monitor clipped to the end of his finger.

The nurse is a guy in blue scrubs and purple gloves with a well-ordered face and a blond buzz cut. He stares at the monitor as he asks Stephen questions.

“Lower abdominal pressure? Groin pain, radiating down leg?” the nurse says, and his profile gets a little smirk in it. You wouldn’t think a nurse would smirk, but that’s how it looks, a tiny creep of smile at the corner of his mouth.

“Sounds exactly like a kidney stone about to pass,” he says.

Now he’s out-and-out smiling. I’ve heard how much fun kidney stones are to pass, and I don’t think the nurse should be smiling.

“That would be so cool!” the nurse says. “If I got the diagnosis just like that? That’s what I’m hoping for!” He shoots a little thumbs-up.

Someone peeps a head in from the door on the right and the nurse gets up from his seat. He starts pulling the monitors off of Stephen, saying, “I have to go resuscitate someone,” like he just has to go warm up his coffee, and he’s gone out the door.

I look at Stephen. Stephen looks at me. Stephen says, “Well? Are you going to write this down?”

I'm glad he knows me so well. Yanking the stack of writing group pages from my purse, I turn the stack over to a blank page and start fishing in my purse for a pen.
Posted by Gigi Little at 7:24 AM 3 comments: