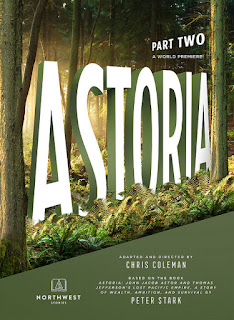 I had a chance to see Astoria: Part Two at the Gerding Theater at the Armory. I debated because I hadn't had a chance to see Part One, and I worried that it'd be difficult to follow, coming in at the middle and with such a large cast to track, and I'm not exactly the sharpest tack in the deck.

Alright, my husband's going to give me a hard time for saying that, so I'll clarify. I tend to get a little lost when a lot of details are coming at me fast, and the biggest thing: I have a really hard time recognizing faces. Often when we're watching movies at home, Stephen will lean in and quietly murmur during a pause in the action, "Remember that guy's the ex-husband of the older sister."

He wasn't with me Friday night when I saw the play, and of course I wasn't going to lean in to my date and periodically whisper in that packed theater (incidentally full of people who probably knew every character from last time): "Wait, who's that guy?"

So when the lights went down and the large cast of mostly men started to range across the stage, I thought, oh no. 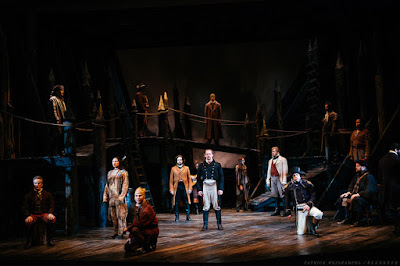 And it was true—there were times when I thought, wait, who's that guy, but in the end, it didn't matter.

I'm here to tell you that even if you haven't seen Part One, even if you're as faceblind as I am, you can thoroughly enjoy PCS' beautifully produced, thought-provoking, action-packed, fully-contained epic Astoria: Part Two.

My early panic over face recognition quickly gave way to the realization that I didn't need to track every character because this was a much bigger story. There are individual plotlines that are fascinating to follow, of course, but for me, this is a story about big picture. About groups of people and the things that drive them apart and the things that bring them together. The instinct for survival being one of them. 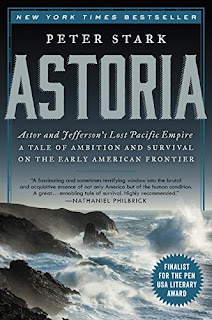 The Astoria story follows the adventures of the Astor Expedition of men—and one woman—to establish trade routes to the Pacific Northwest, ultimately leading to the founding of Astoria, the first permanent United States settlement on the West Coast. The plays are adapted by Chris Coleman, based on Peter Stark's very popular book Astoria: John Jacob Astor and Thomas Jefferson's Lost Pacific Empire, A Story of Wealth, Ambition, and Survival. Portland Center Stage's productions are their world premier.

It's a harrowing tale. Driving home afterward I was mesmerized by the streaks of streetlight red and green and the streetlamp yellow along the rain-wet asphalt streets. Me in my car with the classical station on and the heater going. My god, the lives these people lived, trekking across the wilderness of early-1800s Oregon, fighting to survive, unwittingly helping to lay the groundwork for the easy life I live today. 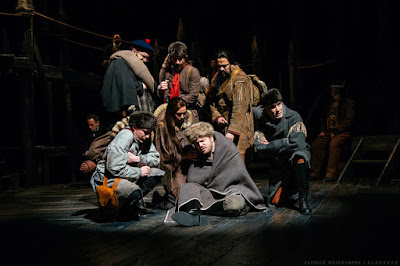 Like many old Hollywood epics, this play included a cast of thousands. OK, I guess that's not true, but I didn't look at a program before or during the production and was surprised to find out, when I got home and started looking at PCS's website, just how many different characters had been portrayed by their robust 17 person cast. It really did feel as though there were something like 75 different cast members filling out the show. 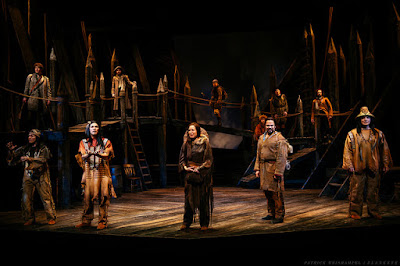 Standouts for me included the fabulous Leif Norby and the very versatile DeLanna Studi who play not only various characters along the arduous trail—including Marie Dorion, the one woman on the 1811-12 overland expedition— but also John Jacob Aster and his wife Sarah Aster in their much more comfortable New York City home setting, creating a fantastic contrast to the brutal wilds of the American Pacific Northwest. 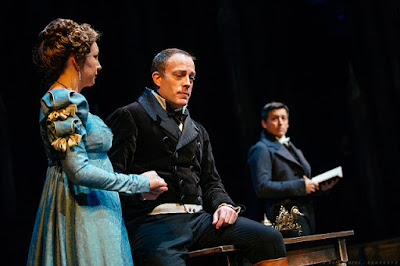 But it really was the ensemble that was the true standout for me. The way the cast told the story, breaking sentences up, back and forth, between them like some leapfrogging Greek Chorus underlined the fact that this was a tale of people, not persons. And my favorite thing? The music. I hadn't expected to find that Astoria is a musical of sorts, with that large cast breaking out in beautiful harmonies, in songs that felt completely authentic to the time. The music again reminded me that this story was a far larger tale than just the individual threads of the particular characters, but it also seemed to make the statement that no matter how difficult and, at times, cruel the world—and the world of men—can be, there is beauty in that world and in what man can make of it.

Astoria: Part Two is playing now through February 18th on the Main Stage at the Armory. More information—including a video you can watch to refresh your memory of Part One (which I did not watch, actually, before I saw Part Two [for more information on why I failed to do this, see the last line of paragraph one of this post])—is here.

Thank you to Patrick Weishampel/blankeye.tv for the photos.