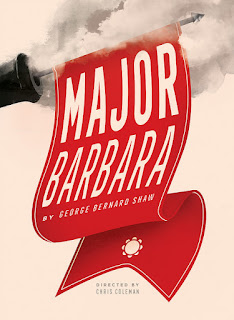 The other night, a friend and I took in George Bernard Shaw's play Major Barbara at Portland Center Stage. I love PCS productions, and I knew this was/is Chris Coleman's final show as artistic director. Come to think of it, one of the first shows I saw - if not the first show I saw - at the Armory was Shaw's Misalliance more than ten years ago. Remembering that play and knowing the many wonderful productions I've seen in that theater since, I knew Major Barbara would be a sumptuous, funny, thought-provoking evening.

Feeling sure that none of her progeny will keep the family in money (not her lazy son Stephen or her daughters Barbara and Sarah or their less-than-well-to-do beaux), Lady Britomart Undershaft has called in her estranged husband Andrew, hoping to persuade him to step up to the plate with some financial support. Andrew needs to find an heir to his business, a highly successful factory that manufactures guns, cannons, torpedoes, battleships, and other tools of war. Lady Britomart Undershaft isn't too keen on troublesome things like bombs, but she's interested in the money and comfort they could bring. The hitch is that for some reason there's a tradition in the business that the head of the company shall always be a foundling. This lets Stephen out (not to mention his equally not-orphaned and decidedly female sisters).

Will Lady Britomart Undershaft convince her husband not to disinherit their less-than-ambitious son? Will Barbara convert her father to a life of peace and goodness through her devotion to the Salvation Army? Will Andrew Undershaft convert (conversely) his daughter Barbara to his religion of money and gunpowder? Shaw's play is equal parts witty and absurd so that halfway through the first act, you realize you've been laughing pretty nonstop since the thing began. It seems like a lovely, light romp designed to let you comfortably bask in its drollery - but then you start to realize you're feeling ways you don't expect to feel. Your sense of good and bad start to skew a little. You start to feel uncomfortable. By the end of the play, you will have examined a lot of things about yourself that you didn't expect to examine - and all the while, you've been laughing your head off.

Standouts in the cast for me: right off the bat, Dana Green as Lady Britomart Undershaft. She exudes the perfect combination of strength, grace, snark, and passive-aggressiveness, with beautiful comic timing. For the whole first act, I was captivated by her whenever she was on stage, and you know that old cliché, I'd follow you anywhere? She did that for me in the opening to the play. Pretty much from her first lines, I was ready to follow her, and the story line, straight through to its end.

She also plays two other characters, including the fantastically crusty Rummy Mitchens, a frequenter to Barbara's Salvation Army shelter.

And then there's Charles Leggett as Andrew Undershaft. With a fabulous laugh and a flair that made me think of my grandfather Coco, who was full of humor and joie de vivre. And here's one of the interesting things about Major Barbara. From the beginning, Shaw is pulling the wool over your eyes. You know Andrew Undershaft gets rich off of death and suffering, you know he doesn't mind this (his "true faith of an Armorer" is to "...give arms to all men who offer an honest price for them, without respect of persons or principles..."), yet you... like him.

You like him a lot. And not only because he's a foil to the hilariously pompous and fabulously quarrelly rest of the family. You like him because of Charles Leggett, who plays him with a sort of irresistible panache. I think this charm is one of the keys to Major Barbara and to successful productions of it, and Leggett pulls it off beautifully.

Major Barbara is a play in three acts but only one intermission, with the actors changing the sets between acts and scenes in that fun, lively way that Portland Center Stage is famous for. In Major Barbara, this technique seems also to underscore the questions of class and labor posed by the play, as rich magnate Andrew Undershaft and prim do-nothing Stephen and down-and-out drifter Bill Walker equally move furniture around on stage.

For me, the only place where the show gets at all sluggish, and really it's due to the writing of the play, not the production of it, is in act two at the Salvation Army shelter. There are a few characters who are introduced and then given a lot of stage time, only to disappear for the rest of the production. It's not that the scene isn't enjoyable. It's as full of witty barbs and laughs as the rest of the play - and a good deal of tension - but I found myself wondering whether some of the exposition was a bit long for the work it did.

Shaw makes up for any overwriting he indulges in by filling the dialogue full of fantastic bon mots (and making you feel smart enough to pretend you can get away with using the phrase bon mots). One line that Andrew Undershaft delivers made both my friend and me let out one of those sounds you make when something has really struck you. Walking out of the theater we were both trying to remember it. Later I googled what I could remember of the line - and luckily much of G. B. Shaw's wit lives on the internet. I emailed her with the line the next morning. Is it a spoiler to include what's probably a well-known quote? If so, look away. If not:

You have learnt something. That always feels at first as if you have lost something.

"Love that quote," she wrote back. "It shakes something up in me."

With Shavian sleight-of-hand and PCS artistry, there's a lot that Major Barbara shakes up in you, even as you're laughing and having a really good time. And in true Shaw form, even that fact is ironic.

Major Barbara continues through May 13th at the Gerding Theater at the Armory. More info is here. Thanks to Jennie Baker for the pictures.
Posted by Gigi Little at 6:53 AM 1 comment:

a moment in the day: golden


It's day three of opera rehearsal for Rigoletto. I'm standing on the balcony in plain clothes but my underskirt tied around my waist. It's the first time the super* women are practicing in our skirts, and I'm glad for this, because going up and down the steps in all these ruffles takes some getting used to.

We're in the middle of the Duke's party, singers and supers scattered across the staging studio. At the piano, the rehearsal pianist attacks the keys with lovely relish, as though he's an orchestra in himself and there's an audience beyond the footlights ready to applaud. I drape my arms across the railing of the balcony, wine goblet in one hand, and watch with staged interest as the Duke and Count Monterone confront each other below.

It seems the Duke has seduced Monterone's daughter, and Monterone's here to crash the party, tell off the Duke, curse us all, and dis the canapés.

And if you give me over to your hangman,
I shall haunt you as a terrifying spectre,
carrying my skull in my hands,
crying to God and man for vengeance!

Monterone is an imposing figure, a very large black man with a shaved head and a deep, deep blue baritone voice.

He throws his arms wide.

Emblazoned on his chest is a white t-shirt with the smiling faces of the Golden Girls.


I've been in opera rehearsals for Rigoletto. No, not singing. I'm a super (which is the opera equivalent of an extra) and I play a courtier in the big party scene that opens the first act. At least that's what we've been rehearsing so far.

I'm trying to figure out which moment was my favorite from practice last night. Can you help me decide?

1. The moment mid-scene when the Duke and the Countess are singing and everyone else across the stage is in a freeze-frame and I stand staring into the eyes of a man I don't know for a long, long awkward half a minute.

2. The moment at the end of the scene where, after having left the stage with the rest of the women, I move around to the side of the staging studio and seat myself up against the wall, my back against a baffle, close my eyes, and listen to the chorus men sing beautiful and raucous up to the ceiling.

3. The moment on the balcony when my partner André gesticulates a little too big and knocks my brass chalice out of my hand, over the side, and down, to clang hugely loud on the studio floor.

Yes. That moment of horror before the cup hits the floor - and not knowing if it's going to come down on someone's head - that's the one.