My PubWest Book Design Award - and a few thank yous


Had a package in the mail from my publisher Laura Stanfill Thursday night. She often sends me things - books, proofs, publicity postcards, even little presents - so somehow I wasn't thinking at all about what was hiding inside the little padded envelope. My medal from the PubWest Book Design Awards! 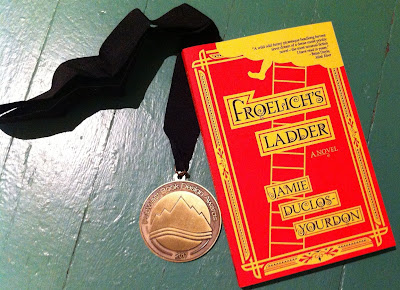 Oh my gosh. The medal was so... metal. So real. Heavy. How strange to hold it in my hand.

"You have to wear it!" Stephen said.

I screwed up my face at him. I was going off to my writing group and the prospect of showing up wearing a big, honking medal made me feel uncomfortable in an I'm-not-worthy sort of way. I tried it on for size. The medal thumped against my chest.

I'm a big celebrator, but we didn't celebrate the award when the announcement came out. At that time, we were in the middle of Nicholas' surgery adventure. Now that the medal has arrived, it'd be another chance to do a little celebrating, be crazy and wear the thing out to dinner or something, but there's just so much going on. So I figured I'd at least do a little showing off. Isn't it pretty? 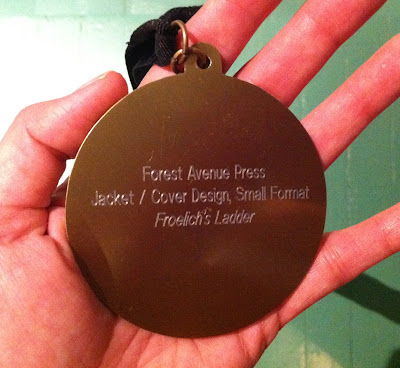 And say thank you to PubWest - for the honor they gave to me and Forest Avenue Press and author Jamie Yourdon, and the honors they give to authors and publishers and designers all the time. And a thank you to Laura Stanfill for delivering me fabulous books to work with and for all her collaboration and her trust, and to Jamie Yourdon for writing the kind of quirky, super inventive book that would allow me to design a book cover like this one.

And to Jamie, too, for making the choice that put this particular cover on the book. I created a number of different samples (warning: these are totally rough, unfinished sketches), from the very photographic... 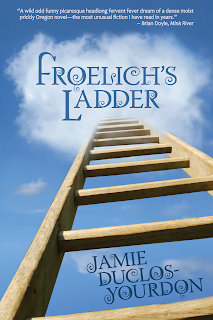 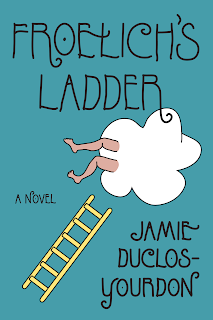 And when Laura showed everything to Jamie, he knew exactly which one he liked best. Laura told me when he and Laura discussed their thoughts on the various samples, he called it the Chaucer cover.

If you want to know just what I mean when I say "quirky, super inventive book," and if you're wondering what all the imagery of legs sticking out of clouds is for, here's an excerpt, concerning Froelich's climb up the fourth-tallest ladder in the world (at least as of 1871), and the digestive practices of clouds.

Soon he’d reached the three-hundred-rungs, whereupon the clouds resided. It was common knowledge to the residents of Oregon that they received a disproportionate amount of rain; accordingly, their clouds were larger and fluffier than elsewhere. Denser, too—more thoroughly saturated. Certainly, they traveled in larger shoals, especially during the migratory season. It was rare for Froelich to climb so high as to see them, but there’d been talk, once, of collaborating on a lithograph, under the title “Whales of the Sky” (Froelich would’ve dictated while Binx transcribed). From the research Froelich had conducted, he knew that clouds molted. He knew that they migrated east and west between breeding and wintering grounds, and that they primarily ate pollen. Because they lacked teeth to aid in digestion, and because their stomachs were semi-permeable, they mostly abstained from eating meat; however, should a cloud chance upon a wounded animal, it had been known to take advantage.

In all likelihood, the cloud that poached Froelich had been a hungry and isolated calf. Why else would it have sunk so low, when clouds rarely ventured below two thousand meters, for fear of getting mired in the soupy atmosphere? To the cloud’s eyes (sightless appendages, able to register only heat and density), Froelich must’ve resembled a molted bird, incapable of flight, or else a hatchling, having recently escaped from the nest. In either case, the cloud had entombed its prey.

This is a coo-coo wonderful book, you guys! Check out this new review that I think really hits the mark.

But I'm getting off topic. Right? I mean, the original topic was me winning things! So here, in honor of that, is a diary entry from the last time I won something:

We kids went up to the kid area where we played the kinds of games you find at, say…Magic Mountain. Edina, who we are sure is going to be a repulsive gambler, won alot of stuffed animals but lost a-whole-lot of money in the progress. Edina won for herself, Heather, and me each, a snoopy doll dressed up like Boy George.

Yes, usually when I get prizes, other people have to win them for me. I'm moving up in the world. 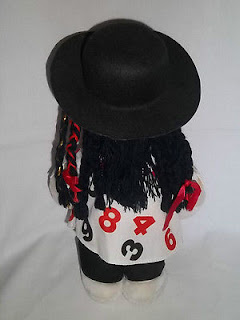