a moment in the day: sky


Home appraisal day. Yet another day along the process in which our hopes and expectations surrounding buying the house could crumble. But how amazing and impossible to have gotten this far. At the same time, I've been building a book. Which has meant reading submissions, choosing stories, rejecting stories, editing stories, ordering stories, all of which felt impossible this time last year and here I am on the other side, in final discussions about titles and subtitles with the publisher as the galleys are being prepared.

I walk Nicholas in the morning. Down the marble stairs, through the grand entryway of the apartment where Stephen and I have lived for ten impossible years. Can it really be ten years? Out though the front door, and we turn to the right, stepping under trees. There's a curious sizzling sound, like rain in the tree leaves, but that can't be. I stop and try to figure out where it's coming from. I finally bother to look down. Tiny spots all along the pavement. Step out from under the tree and put my hand out, and there it is, no question: impossible rain coming down from this sky. 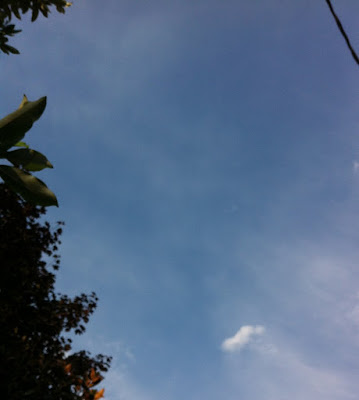 
OK, now listen to me. If you get a chance to see an Anonymous Theater production, GO. I wish I could tell you all about it and at the end post a link to information about other performances, but this was a one-night-only affair. All I'm going to say is, be on the lookout for the next. I have just had the most fun I've had in a long time.

Tom Stoppard's The Real Inspector Hound is such good material, you kind of can't go wrong, but couple it with Anonymous Theater, and you add an extra layer of serious fun. If you don't already know what it is, an Anonymous Theater production is staged entirely with the actors (as you can probably figure out from the name) anonymous. This means not only does the audience not know who the actors are as they sit right there in the seats until their cues, but the actors themselves don't know who they're playing against. All the rehearsals are performed one-on-one with the director. So by the time the cast comes together for the one-night-only performance, it's just as fresh and new to them as it is to you.

Director Darius Pierce (who's also a fantastic and well-known Portland comedic actor) started things off with some remarks and some thank yous, an explanation of Anonymous Theater for any uninitiated, and when he was done speaking I leaned over to my friend and date for the evening and said, "His talk alone is worth the price of admission." Already we were laughing more than you do watching some comedies.

Then the show started. A darkened theater, the sound of birds, and suddenly out of the audience, up pops our first actor. The applause turns to laughter as she goes running down the side of the theater to take her place on stage.

Along with The Real Inspector Hound, we were treated to the ten-minute play On the Porch One Crisp Spring Morning, by Alex Dremann. You think maybe the extra ten-minute play is going to be a throwaway. Oh, but contraire.* It was a hilarious mini-drama between a mother and daughter who happen to be... spoiler alert... spoiler alert... double agents. Or triple agents. Maybe. Or maybe not. It's one  perfectly convoluted thing after another, and the two women in the piece (sadly, I can't remember their names, and of course the names are not on the program!) played it with a lovely mix of energetic rage and subtlety. My date for the evening is a writer who has just finished a gorgeous memoir that deals a lot with her own very odd mother, and it was such fun to hear her laughing with relish through the whole piece.

Seriously, when The Real Inspector Hound began, I was worried that it wouldn't be as funny as On the Porch. But the whole evening was smart, clever writing and laughs all the way through. And as I said before, the Anonymous part of it adds a lovely extra layer of energy. I was actually nervous as the lights dimmed and we waited for the first actor to pop up, as if it might turn out to be me. Then, with every actor who jumped up in his or her seat and started running to the stage, I just felt more and more energized.

The way the actors all ran down the aisles, grabbing their props from tables at the base of the stage as they went, added to the liveliness of an already fast-paced, lively play. At times the actors had some fun with the Anonymous-Theater-ness of it all (for instance the housekeeper finding that the apron she'd just picked up from the prop table didn't fit, and finally chucking the thing), and you were never sure if these moments were improvisations or moves planned out between actor and director. Here and there, the actors, witnessing the show fresh, couldn't keep from smiling, themselves.

Stand-outs among the actors. For me, they were... well, unfortunately, again, I can't remember any of the names that were announced at the end of the show (partly because the audience was applauding so vigorously I couldn't always hear). The woman who played Mrs. Drudge. Beautiful timing, sharp-as-a-tack delivery. And the guy who played Simon Gascoyne. Fabulous, particular physical comedian. I so enjoyed watching him that I was very disappointed when he... um, spoiler alert... died.

You see, halfway through the show... OK, wait. I suppose I should explain some things first. The Real Inspector Hound is a play-within-a-play kind of play. At the beginning, you're introduced to two theater critics sitting in an audience. You get a bit of their story as they wait for their show to start and then the play, a murder mystery, starts to unfold in front of... both you and the critics watching from their seats at the side of the stage. Hilarity ensues - or continues to ensue... it never stops ensuing - and in a crazy, but beautifully orchestrated twist that would take entirely too long to explain, halfway through the show, the play-within-a-play starts over from the beginning as one of the critics gets pulled into the production. He is now Simon Gascoyne. The murder mystery goes forward a second time with this new Simon.

What audacity, to stage most of an entire play twice in one show. And how fascinating. The Real Inspector Hound is a player's play. An actor's delight, especially when the actors are witnessing the thing fresh, themselves. How interesting to watch two completely talented, completely different actors play the same part.

Actors playing actors, actors playing theater critics playing actors, critics discussing tropes and tropes discussing the world, love, mystery and murder. Layer upon layer. And as I said: especially when produced by Anonymous Theater. Not only is it a play within a play, but it's like an Anonymous Theater within an Anonymous Theater. I started to fall down a laughing vortex, a rip in the space-theater continuum. Here I was, a blogger playing a theater critic, Watching and laughing and trying to find meaning while the audience (and I) laughed at the theater critics trying to find meaning. And the meaning was nothing more than (and most importantly nothing less than) an evening of uproarious laughter, shared with a theater full of people and a good friend. The music of her laughing all tangled up with mine all tangled up with everyone else. There's nothing better.

For more information on Anonymous Theater, check out their website here.

On Monday, Stephen and I will be seeing The Real Inspector Hound at the Gerding Theater. I'm so excited. With my editing the next short story anthology for Forest Avenue Press and our working to buy a house (!), this will be the first play I'll have the privilege of writing about in a long time. Now, we were lucky enough to have a chance to get out last Saturday and see a bit of Shakespeare in the Park—A Midsummer Night's Dream with the multitalented Kallan Dana as Hermia—but unfortunately, I just didn't have time to sit down and write a thorough post about it. But I will say it was a total delight, with a bit of modern spice thrown in, and lots of zaniness.

Interestingly, there was a tiny bit of parallel between A Midsummer Night's Dream and Monday night's The Real Inspector Hound. That is, of course, that both plays were written by Tom Stoppard. No. But from where we sat on lawn chairs in the park last Saturday, we had a good view of the back of a big guy in the audience sitting in his own lawn chair, laughing delightedly and periodically shouting something funny at the players on stage. Then in the middle of the proceedings, up he pops—and here was Puck, tricking us already by pretending to be an audience member.

The Real Inspector Hound is being put on by Anonymous Theater. I saw one of their productions once before and LOVED it. In an Anonymous Theater production, all the actors are sitting anonymously in the audience and you have no idea if you're sitting right next to one of the players until he or she suddenly pops up and delivers the first line from right there in the seats. No matter what play you're seeing, there's this added excitement that comes from the not-knowing—and also this lovely sense of inclusiveness, like the entire theater is part of the show.

The Anonymous Theater production I saw before was Macbeth and I was pretty sure the friend who invited us, the immensely talented Christine Calfas, was going to be in the show. Little did I know she was playing Lady Macbeth herself. It was a total thrill when she popped up and called out her first line, but the most interesting moment of the evening, beyond the beautifully presented play itself, was when the actor playing Macbeth jumped up from his seat in the house and Christine, still sitting next to me, let out a gasp and involuntarily pounded her chest with her fist because she was so excited to find out, right then and there, that the man she was playing opposite was an actor she knew and loved.

Yes, even the actors don't know who they're playing against. Which means they have NEVER rehearsed together. This is so fascinating to me. Rehearsals for The Real Inspector Hound have been going on two-by-two. Just one actor and director Darius Pierce, going through lines and blocking and only anticipating the rest of the cast. It's quite a feat to mount a production like this, and Anonymous Theater does it masterfully—giving you, in the end, a show that is amazingly tight but full of a freshness that comes from top-notch actors pushing their limits right in the moment.

If you're intrigued, check it out. Monday night at the Gerding Theater, 7:00. Along with The Real Inspector Hound, you get the ten-minute play On the Porch One Crisp Spring Morning by Alex Dremann. More information on Anonymous Theater is here.

Posted by Gigi Little at 4:46 PM No comments: