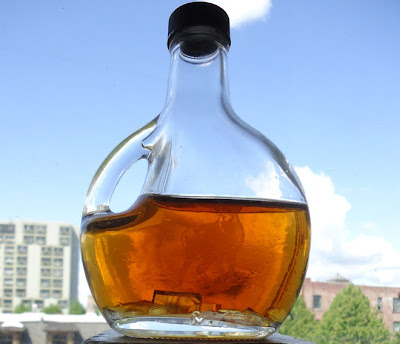 [maple syrup.]
Posted by Gigi Little at 3:49 PM No comments: 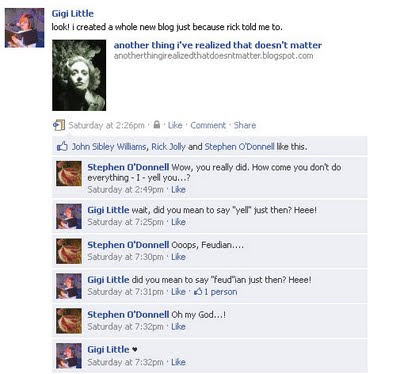 And Sasquatch did absquatulate.

[translation: Bigfoot hot-footed it out of there.]
Posted by Gigi Little at 12:21 PM 4 comments:

On impulse--and an invitation from Lisa Mooyman, who's performing in the show--Stephen and I got involved with singing in the chorus for Opera Theater Oregon's next performance, Sordid Lives. Opera Theater Oregon is known for pairing opera with all sorts of kookiness, and Sordid Lives is a crazy combination of eighties soap operas and tabloids and those choose-your-own-adventure books--remember them?

I like how in the press release material, they call us a Greek Chorus. Sounds nicely hoity-toity. But we'll be singing, among other things, pieces of the Men At Work song Down Under, and cuss words involving the part of the body I don't like to think about.

When we were first invited to be part of the show, I thought we were being asked to make a single appearance as a crowd screaming obscenities. And I thought I got to pick my own obscenities. But actually, we'll be singing those four letter words. And they're not the ones I like to say out loud.

I'm good with the f word, I'm great with the f word. It's the s one I don't like to think about. It was strange to sit in rehearsal last night and sing that word loud. And then to have to follow it up with fart. You see, I can hardly write it here - and I've got to sing it.

The last word in the trio is ass. And even though that's the place from whence come the other two words, it's much easier for me to say. In my brain, I always add a little jack, so that it's about the donkey instead.

The rehearsal ran long, and they asked anyone who wanted to stay another half hour... to do so. The whole chorus - including the chorus master - left except for Stephen and me and one other woman. I hoped we'd rehearse some other part, but, no, we had to sing our ass words again, and louder this time, with no other voices to hide behind.

All in all, rehearsal was a really fun experience. Along with cuss words, we get to sing bits of the Toreador song and... well, other things. Guess I'd be giving things away. All I'm going to say at this point is that it's seriously worth the price of the ticket to hear Lisa sing Queen of the Night while in the midst of a cat fight. It was so funny I had to stop thinking about it so I didn't keep laughing through the next bit of practice.

The show goes on Friday, 7 PM, at the Mission Theater.
Posted by Gigi Little at 7:56 AM No comments:

encounter at the funeral

This isn't about the man we went there to honor. Who, whenever I think of chatting with him at family parties, makes me smile before my face even knows.

This is about the moment standing in the entryway of the huge Catholic church forty-five minutes before the service was to start. Mary and me standing together and I’m smiling and reacting as she talks with a middle-aged black man wearing glasses with hexagonal white frames. Something about his suit makes me think he is part of the church. He looks across to Stephen and says he not only loves Stephen's tie but wishes he could buy it off of Stephen right now. He has a tie collection. He estimates that he owns about two hundred ties.

“You have class!” he says loud across to Stephen in the echoing narthex, and we all laugh.

The man tells Mary that when he dies, he wants his daughter to sew a quilt out of his ties to give to his granddaughter.

He says, my granddaughter is beautiful. Blond and blue eyed. He says, I married a Caucasian. I wanted beautiful children.

Mary nods and smiles and responds, but her smile starts looking a bit plastered on her face. Tiny, confused line between her eyebrows.

He says, I taught my daughter that she should marry a Caucasian, too. And she did! And now I have a beautiful blond haired, blue eyed granddaughter!

Later, I go down the aisle and sit in a pew. I'm surrounded by faces. In the stained glass windows and in statues all around. Jesus and Mary, apostles and saints. All of them with white, white faces.
Posted by Gigi Little at 5:53 AM 2 comments: