a moment in the day: egg


I'm just up from bed on a Saturday morning, oversized t-shirt and pillow hair. We're in the dining room talking about the grocery store, how he's going to go. As he takes a step toward me, I'm taking a step or two away and saying, "I'll think if I need anything."

I turn back, "You were?" And he comes over and folds me in warm.

I can't think of anything I said that was particularly wonderful. I say, "To what do I owe this?"

Posted by Gigi Little at 9:21 AM No comments:


When I was contracted by University of Hell Press to design the book cover for Liz Scott's memoir This Never Happened, I was equal parts thrilled and freaked out. As a member of Liz' writing group, I knew every essay intimately, and let me just admit: I'd been having a love affair with this book for years.

I remember one evening in group when Liz got to the end of reading a piece and we were about to launch into the critique, and I tried to say, "Wait, can you read [such and such a passage] again," but mostly just burst into tears.

This Never Happened is heartbreaking but also darkly hilarious, a memoir in gorgeous little fragments—which is such a perfect structure as so much of the story of her (totally bananas) family/background is shrouded in mystery. When I went to her house to talk about the book cover, she brought out a very small hoard of old photographs and papers to look through. Peeking through these remnants was like reading through the fragments of her life in the book.

So I started by tinkering with a scatter of these fragments, seeing where I might lay out, in the middle of the chaos, the elements of title, author, "a memoir." Finding placement for the Hell Press logo that the publisher generally places on its book covers. 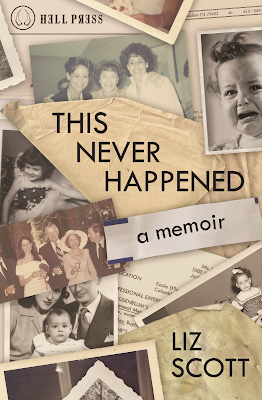 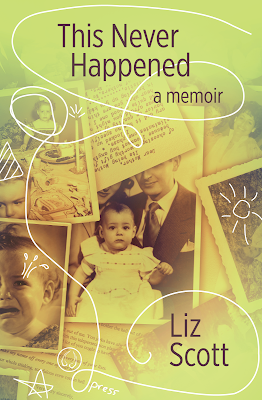 There were photos but also old papers: job applications, notes, strange letters-to-the-editor that gave so much insight into her father's fascinating character. A lot of which are reproduced in the book.

She had this sweet, little mini photo album that intrigued me so I altered it with her name and book title for a sample or two. I was kind of proud of that. 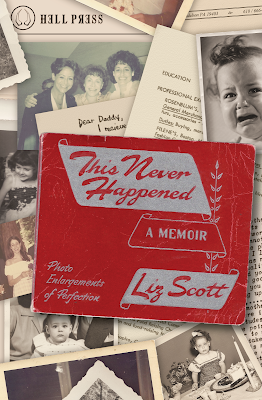 But as I worked, I started to zero in on one particular picture. The photo is of a baby Liz with her (complicated, narcissistic) mother and her (complicated, mostly-absent) father. In the middle, Liz looks... a little shell-shocked to be there. Maybe a little... what's the word I'm looking for? What's that expression that's a combo of wisdom and wtf? 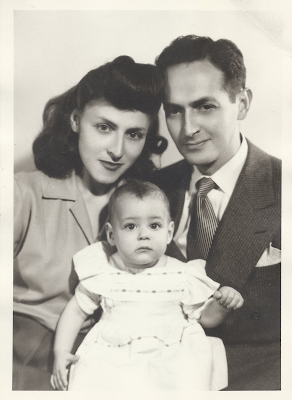 To me, she looks like she's saying to you: honey, you don't even know.

That picture seemed so apropos of the tone and content of the book. So I started to focus on how I could use the portrait front and center. First, I photoshopped it so that it would look like one of those old colorized photos. 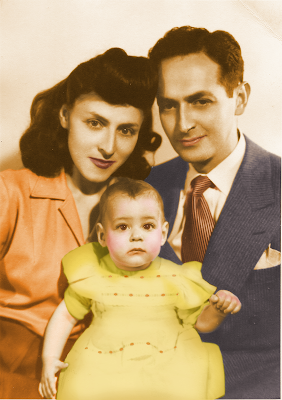 And in the end, when I sent a bunch of my tinkerings to Liz and the folks at U Hell, they chose the below. Baby Liz peeking up from the lower right corner and most of the faces of both parents hidden, speaking to the many unknowns in Liz' history and, to me, the personal distance and the longing that Liz endured through her very particular story. 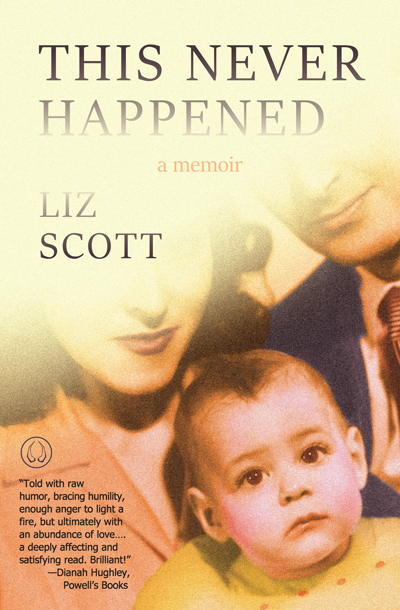 What else comes from all that Liz endured? Well, in her case: a woman full of wit, intelligence, wisdom, integrity, and personal strength. And one hell of a book. I hope I've done it justice.

My mother says, “Now’s the time to ask. If you have any questions, now’s the time.” She waits till her deathbed to say this and it’s hard to find the right adjective to describe this feeling, how it might be possible finally, after all this time, to get some answers to the mysteries of my family. Thrilling, shocking, flabbergasting, mind-bending, Jesus-fucking-christ. It’s been years—decades really—worrying this puzzle, this frustrating, vexing, bring-me-to-my-knees puzzle. What I know: I have a mother and a father. I have a sister. But that’s hardly enough to construct even the outside border, let alone begin to fill in the picture.

Once when I was young I asked my mother if she had any brothers or sisters. “I don't remember.” That was her answer and somehow, in our family, that passes for an acceptable, reasonable answer. What must be going on in a family where you just leave it at that? And then to boot, when my sister and I are already well into our adulthood—surprise! You’re a Jew!

Now’s the time to ask questions? Okay, Who am I? Where did I come from? How did you both—mother and father—get to be such fucking whack jobs, bless your hearts, but really.

I’ve come to believe that all of this—the facts about your ancestors, the truth about your family story, the reliable connections—are what create ballast in a life. With little to anchor me to earth, I’ve been in one long free float trying to forge some mooring in various, ill-conceived ways with only modest success. Because really, before you clearly know what you’re after, it’s all mostly flailing. I’m fast approaching my eighth decade now and I imagine this is what happens when time starts to run out. The need to make sense gets stronger and more urgent. If there are answers out there, I want them. If there is sense to be made, let me make it. And while we are at it, do let me forgive.

You can buy This Never Happened in many places, but my favorite is here.

Liz' book launch will be this coming Tuesday, April 23rd at Powell's City of Books in downtown Portland, Oregon. More info on that is here.

a moment in the day: après l'école


Finished with his first French class of the quarter, Stephen quietly sings a song in French under his breath. He tells me about one of the other students, a guy who's married to a French woman.

"They're making plans to move to France."

"They're going to get there and just wander the countryside looking for the perfect place to settle down," he says.

"I know," he tweaks his eyebrows at how unfair it all is. "Why couldn't you be French?" he asks.

a moment in the day: twenty-one


I'm driving home after work, start and stop traffic down Burnside street. On the news, they talk about some place in Alaska where, usually this time of year, they can drive across this road made of ice, but the globe is warming and the ice is melting earlier and people fall through the ice and die.

The whole day seemed to have gone by in two or three hours. That's what time does, now. It was just New Year's and already it's April. At work that means it's time to start planning for the holidays, and I spent a large portion of the day emailing people and setting up meetings about things like Christmas decorations.

A red light turns to green and my car moves forward. On the news they talk about rain and the river and where, in and around Portland, are the biggest chances for flooding. I try to remember little moments in the day. Email, email, email. I remember when a coworker said to another: ever since I moved to Portland, every time I bought an umbrella—every time!—I would leave it on the bus. I like to try to write down moments from the day. Sometimes I even turn them into little posts for my blog. Like if I could focus on every small moment, it could make life stop speeding away so fast.

When I was a kid, life was eternity. Waiting for Christmas lasted forever. In my thirties, I spent an inordinate amount of time playing the game that I could actually slow time if I paid better attention to it. I paid attention and paid attention, but then I was forty and then I was almost fifty.

I ease the car onto Burnside Bridge. Doing what I always do when I drive out onto this slab of concrete suspended over space: pretend not to think about earthquakes. Traffic stops, starts, stops again. Stops completely. I wait. Pay attention. Look down over the Willamette River, take my eyes across the shoreline, the tiny people walking along the edge, try to look for someone walking a dog.

The water is so high. On the news they talk about North Korea and say words like "missile."

When they do that, all I want to do is eat all the pizzas in the world. Eat pizza and cheese and noodles, eat it all before it's too late.

It's April, and it's already almost Christmas.