brave on the page at powell's city of books

Every Portland writer dreams of reading at Powell's City of Books - not to mention plenty of writers across the country. What a cliché to say, but it's true. I had the chance to be part of an event there in 2009 when Portland Noir came out. Though I wasn't one of the readers, I got to hang out at the table and sign books afterward, as a contributor to the collection, and it was definitely one of the thrills of my writing life. 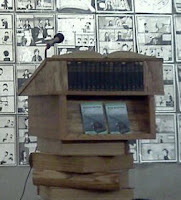 Last Monday, January 7th, I read at that podium as part of the Powell's event for the book Brave on the Page. It was an incredible event in many ways. The lineup was...wow. Reading from their essays in the book, along with me, were Kate Gray [Another Sunset We Survive], Gina Ochsner [The Necessary Grace to Fall], Robert Hill [author of When All is Said and Done and a personal writing hero of mine] and writer / editor / publisher / powerhouse Laura Stanfill. After the readings, writing guru Joanna Rose [Little Miss Strange] moderated a panel on writing, process and creativity with Jon Bell [On Mount Hood], Kristy Athens [Get Your Pitchfork On], Scott Sparling [Wire to Wire] and Yuvi Zalkow [A Brilliant Novel in the Works].


When we gathered for a photo afterwards, Kate and Gina were lost in the crowd and we couldn't pull them over, but here's most of us - framed by a wall of black and white comic book pages. When you think about reading in the Basil Hallward Gallery in the Pearl Room of the City of Books, you have to wonder what art show will serve as your backdrop. I loved this. It was nearly floor to ceiling.


We had a wonderful, enthusiastic crowd of approximately 150 people, including local writing luminaries like Tom Spanbauer, Stevan Allred, the recently-Oregon-Book-Award-nominated Carter Sickels. And one of the coolest things to me: so much of this crowd was writers. I suppose that's to be expected when the book is about writing and the essays speak to the writing life and the panel is all about craft - but as expected as it was, it still made me very pleased, so many of us gathered in one place to talk about this thing that is sacred to us.

I really liked the mix of essays chosen for the event. Kate Gray's "Shiny Object, Shiny Object" was full of great suggestions for writing and getting the job done, all of which I [wish I could] adhere to. "...After an hour on a bike, the focus on one-foot-two-feet, spin-spin-spin, everything else falls away. And I am balance and shift and friction..."

Gina Ochsner spoke about the very particular issue of cynicism and what it can do to our confidence, our writing process. "...If I allow cynicism to drum with the heavy hammers of no good, no good against the tympanic membrane, I hear the winter wren in the dark hemlock behind our house. I can't recognize the beauty of its song nor appreciate the fact that the smallest, plainest birds compose the sweetest songs..."

Again, it was a nice mix - because Kate and Gina's essays spoke about process and craft, Robert Hill and Laura Stanfill's essays combined writing topics with personal stories, and mine was a purely personal story - one that, when I lived it, had been full of shame and, when I read it last Monday, got a surprising amount of laughs from the audience. I love when the stories of your life do that:

"...Ring of the phone, his voice in my hear, high, almost feminine: 'Can I share something?'

"It wasn't really sharing since he'd only called to read me a story he'd written, and he didn't really want to know what I thought unless I loved it.

"Sometimes I didn't, but I hated to disappoint people..."

Robert's "Why I Write Out Loud" is about words - about sound and texture and cadence - but is also about family. "...I grew up on stories told at bedtime, told on car trips, told at the dinner table, after dessert. My mother told these stories, five or six of them, over and over, in rotation..." and "...Every syllable of these words told in my mother's raconteur's voice full of wit and Brooklyn inflection I loved hearing, every entertaining sentence told again made the usual silence of our family bearable..."

Laura Stanfill's "Overnight" describes the writer / mother dilemma, Laura lying in bed, waiting for her daughter to fall asleep so she can get up and write her novel. But this tiny essay is so much more:

"...The boy in my novel gets diagnosed with a weak constitution, and he believes what the doctor says. He stays in bed. He reads and rests. He wishes. My daughter rolls over, tilts her chin up, breathes deep. She started kindergarten this fall. The shift of her world has begun. Someday both my girls will leave the house without me. They will be broken apart by small things. I tell stories about brushing teeth, drinking milk, getting enough sleep, instead of filling pages with lace and music. Someday my girls will choose whether or not to be good to their bodies..."

Sadly, I can't include a bit of voice from Scott, Yuvi, Jon or Kristy, since their portion of the event was all off the cuff, not in any book for me to refer to. But it was such a terrific panel. Funny, fascinating, just the right length. Joanna Rose led them through such topics as dealing with holes in writing, "fact vs. truth," and the benefit of writing groups - illustrated perfectly in a story Joanna told in which, while workshopping a scene with the Pinewood Table writing group, Scott Sparling learned that women in showers do not squat to pee.


These guys were great. Every one of them. And after the formal panel, Laura brought all of us back up front for a Q&A, taking questions from the crowd. 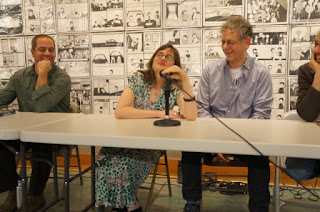 - A little goofing with the mic, which didn't quite reach me in the very center of the group. It was an honor to sit in the middle of these smart writers and try to keep up with the great questions and answers.

I said it was an incredible event in many ways, and another of those is the support Brave on the Page has had from Powell's. Forest Avenue Press is a very new press, a micro-press, yet here we were with a big event hosted by the City of Books. Also, the  books are printed just one floor down on the Espresso Book Machine. I think Laura Stanfill has something really special going with Forest Avenue Press, and the support she's gotten says loads about not only Powell's and the writing community in Portland but also - and most of all - Laura's energy, ingenuity, and smarts.

After it was all out and over, Laura had this to say in an e-mail of thanks to all the participants:

"I keep thinking about reading in the Pearl Room as a dream come true and how it came true in a richer, deeper, more powerful way than I could have imagined. And nobody in New York made it happen, no agent or editor or outside party. We made it happen. Together."

To order Brave on the Page from Powell's Books, click here.