an evening of story and song

Brad's benefit was great. First rate readings and music. It seemed like everything read was yet unpublished, too, which made you feel extra special, being there for it. Actually, I'm not certain about Emily Chenoweth's and Margaret Malone's pieces. Margaret said she was going to read an old piece, so it may be a published story I just hadn't heard about. Things labeled as "old pieces" shouldn't be allowed to be that good. They should be the quaint efforts of an earlier period, which you smile over and say, but you can see the beginnings of her greatness here, and here. Also, things Margaret says she re-read after a number of years and thought oh god this is horrid... shouldn't be allowed to be that good either. Damn it.

Monica Drake, first in the lineup, read from a novel in progress. Funny, endlessly quirky and surprising. She writes her crazy situations with a matter-of-fact sureness that adds to the humor. Really enjoyed it.

Tom Spanbauer also read from a novel in progress. It was a piece he'd read in Dangerous Writing some time back--so lush and brilliant. And dreamlike. It's been amazing to follow the creation of this book--and to see Tom go to places even he hasn't gone before.

Emily Chenoweth read two different pieces, each about guns. I hadn't read her before. She has an easy style full of great details and truths. She was a charming reader--even breaking into her own piece to tell an impromptu story that had just happened, about kids making a drug (?) exchange on her front lawn.

Cheryl Strayed's piece was from her soon-to-be-out memoir, Wild. Wow, amazing, stark revelations from her life. I think it's going to be a fascinating book. With a top story about Cheryl hiking the Pacific Crest Trail and all sorts of very personal stories underneath.

OK, update--Margaret's story was a published piece--her first, she told me. Meaning it was her first publication, not meaning she hasn't published since, because she has.

I got to give Tom his second round of applause and then do an intro for Closureyes. Though the mic sounded plenty loud to me as I spoke, apparently I wasn't quite loud enough. A lot of us weren't quite loud enough, with all the bar noise going on in the back of the room. What I said was that Colin Farstad, who is part of Closureyes and was also the host for the evening and the man behind setting up the event, is also an excellent writer. I had heard Closureyes' music before but never live. It's great--edgy and raucus but also a lovely sound.

Brad--the man of the evening--they even got him up there to speak. Well-deserved standing ovation. Even still recovering from the infection and the surgery, he wrote an impromptu piece and got up to read to us. It was full of his great voice and was a very heartfelt thank you to a lot of people who have been there for him during all this.

It was a packed house and the event raised about two thousand dollars. Not long after, I discovered that the on-off button on my computer had disengaged and was sort of floating around inside, and I had that initial impulse reaction of, oh @#%$*%# do I have to buy a new computer now? Prices of computers started hitting me in the head, and in the moment after I pulled myself out of a downward spiral of NoNoNoMommyNo, it hit me that you could buy a measly computer with what was raised for Brad's enormous medical burden. There's a bit of perspective for you. But there's more that can be done.

Donations can be made to the cause by simply going into any Wells Fargo Bank and saying, I'd like to donate to Brad Rosen.
Posted by Gigi Little at 7:39 AM No comments: 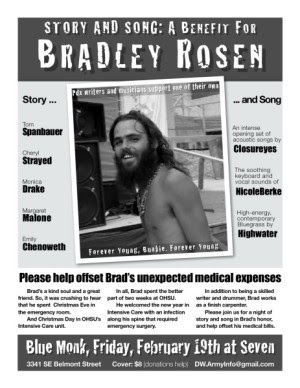 Story and Song: A benefit for Brad Rosen

Our lineup includes a Pulitzer Prize finalist, two current holders of Literary Arts Fellowships, a Great Lakes Book Award finalist, and a winner of an Arizona Commission on the Arts Award.

Plus cool Portland musicians including the very awesome Closureyes.

The event was born when we of the Dangerous Writing workshop found out our friend and fellow writer Brad was hospitalized with an infection in his spine which required emergency surgery. As he gets back on his feet, we'd like to help offset his medical bills. Come out and enjoy a night of truly great Portland talent and help out a guy who, I have to say, has one of the best books-in-progress that I've read in a long time.

On Sunday at two o'clock, Stephen and I will be souls imprisoned in our bodies.

That's the part we, along with upwards of 100 other chorus members, will be playing in a performance of Ordo Virtutum at two o'clock at the First Presbyterian Church at 1200 SW Alder (in Portland).

It's a one-time performance, and when our friend and *impressario* Stephen Marc Beaudoin put out the call for people to sing, we thought it would be a cool experience, so we signed on.

Ordo Virtutum is the oldest known morality play in history, written around 1151 by the mystic and abbess Hildegard von Bingen. I had known of her but was not familiar with her work before this. I've been looking at the music and listening to recordings to get familiar with the little bits that the chorus will be a part of. Really interesting. Really difficult. Because not only is the text mostly just sounds in my ears with no meaning to hang my memory on, the tune itself seems not to have any logic to follow. No time signatures, no rhythms to hold onto. The notes wash up and down like foam on river water: if you try to grasp it, it runs through your fingers.

But as I start to get a little more used to it, a strange, elusive logic starts to appear. Something emerges out of what at first sounds like a randomness of notes. It's a very particular beauty.

Here's a link to a little bit of it.

The words start to emerge kind of in the way that the music's liquid structure does. Sing these sounds over and over and the knowledge, locked away in your brain, of latin and latinlike tongues starts to put bits of understanding to the sounds.

Sunday's performance is being put on by Portland's self-proclaimed "manband" Fourscore - who get to play the part of the devil. I love drama with the devil in it, and I like that they've given him four linked voices. Like he can't be contained in one.

Alright, enough musing. Here's the info off one of Stephen's press releases:

“Ordo Virtutum” is scheduled for one performance only: 2pm on Sunday, February 21, 2010, at First Presbyterian Church, 1200 SW Alder Street. Tickets, $10 for general admission and $8 students/seniors, are available at the door the day of the performance. More information, including directions to First Presbyterian Church, available by calling 503-228-7331
Posted by Gigi Little at 12:09 PM No comments:

Everything leads me to thee.

A key line in the Norma Shearer film Marie Antoinette. It is engraved in the ring she presents to Tyrone Power, and she recites the line to him as a sort of love pact early on in their relationship. I was looking for a good bit of the Shearer-Power dialogue for a Valentine's Day card I was making for Stephen, and it seemed fitting. 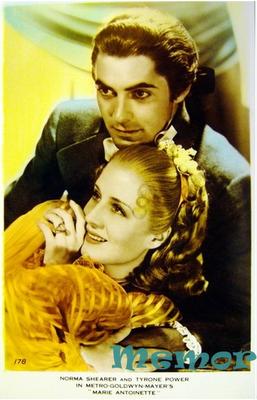 I jotted the line down on a tiny piece of paper and took it with me, along with the graphic I'd photoshopped for the card, to work, where I could put it all together without him seeing. Thought myself mighty clever in all this until he arrived at work and came to my desk to say hi and there was the tiny piece of paper with the line scribbled on it, for him to see.

I also bought a bit of Valentines chocolate for him when I was picking up a birthday present for a friend at a highline chocolate shop downtown called Cacao. Again thinking me plenty clever, taking the little box for Stephen out of the bag and hiding it away - and then leaving the receipt for him to see.

In the end, the card had "Everything leads me to thee" on the outside and then on the inside... 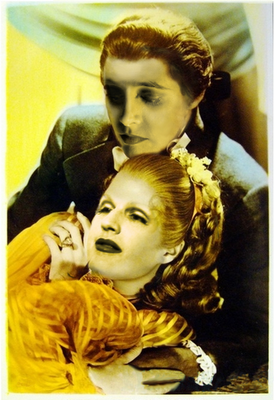 Stephen as Norma, of course, and I got to be Tyrone Power.

Lovely Valentine's Day--kooky cards, champagne, morels, shiitakes and oyster mushrooms in port wine cream sauce, Chet Baker, crema Catalana and Busby Berkeley. Stephen doing the cooking AND the cleaning. And here is the card he made for me... 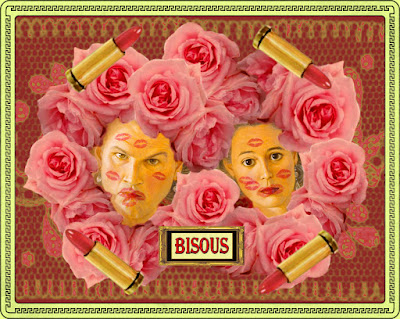 Here's a shot of the top panel of my February window display for my friend Kevin Sampsell's new memoir. He let me borrow some old family photos - some in the book and some not. Click on the image to enlarge if you'd like to see, among other things, Kevin's bushy-haired eight-year-old school photo and Kevin's house on fire - one of the many stories in the book.

There are more photos in the lower part of the display, which I'll have to post once I can get a shot or two of it.

Oh, and the blank area on the right is where I've set a copy of the book in front, in the window.

[that's a clumsy little sentence. i'll bet he gets teased by his friends.]

It's been really fun following along with the progress of this book and sharing in Kevin's excitement. Tuesday night was his very first reading for the book - at Powell's on Burnside - and I have to admit, I sat myself and my party front row center for it. With as emotional a night as it was for him, he read his pieces and presented his excellent slideshow with charm and great timing and topped the evening off with an on-the-knee proposal to his seven-year (was it seven-year?) love. Stephen and I were talking later about how similar their story was to ours - yes, great things can come out of one simple fan email.

Take a jaunt over to Kevin's website for a blog post about the night, plus pictures and even a bit of video. More info on his tour is there as well.
Posted by Gigi Little at 12:46 PM No comments: