Little Shop of Horrors was beloved in my household when I was growing up. At the drop of a hat, we would put on the soundtrack and sing our hearts out at the dinner table, and now, years later, with all of them far away in California, the thought of that shared joy over music and blood-thirsty man-eating potted plants makes me want to cry. Watching it again, Friday night at Portland Center Stage, I think I smiled the entire time. 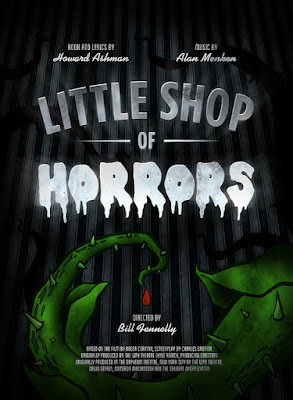 It wasn't just nostalgia, although the moment the song "Skid Row (Downtown)" began, I had that thing happen where all the skin on my legs tingles. I think that's my body's equivalent of getting the chills. And I know those chills in that moment, and the grin that spontaneously clamped itself to my face, were pure nostalgia. But the way that smile wouldn't let go through the whole show, and all the laughter that probably annoyed the woman seated to the left of me, that was pure Portland Center Stage.

I was worried, as I always am when I'm watching a performance of something I've known in movie form, whether this production would be able to stand up to that old, beloved version. And would they go for a classic rendering or throw in a twist (which sometimes works, sometimes doesn't)? Portland Center Stage's production of Little Shop of Horrors is totally classic*, and totally works. It's got the beautifully pipsqeaky Seymour, the bombshell-squeaky Audrey, the giant puppet plant, all of it. But I wasn't jonesing for a Rick Moranis or a Steve Martin. I guess the closest I came to missing something was, early on, being aware of just a hint of longing for Ellen Greene's (the original off-Broadway Audrey who reprised her role in the 1986 film) surprising voice switch from squeaky to something husky and odd and powerful at certain spots in her songs. I knew I couldn't expect it. That was not classic Little Shop, it was classic Ellen Greene, and to have another actress mimic that would not be right. Still, I had a little craving. But it didn't last long. Gina Milo's voice is beautiful and pure, and her high notes are powerful in their own right.

She also works the line between humor and sweetness very well. When she came to the end of "Somewhere That's Green," this moment of poignancy that has to struggle to exist in all of Little Shop's luscious camp, I thought to myself, wow, I totally believe her.


Nick Cearley, too, was funny and nuanced. He played Seymour as Seymour should be played, but with lovely timing that kept the most easily caricaturable part in the show from being a poor parody.


Jamison Stern was particular and beautifully slimy as Orin, Audrey's sadist-dentist boyfriend. The scene in the dentist's office, Orin in his nitrous oxide mask, that terrific prop and the way the sound quality of his voice was used - egad, it made me the perfect kind of uncomfortable.

I so loved Johari Nandi Mackey, Alexis Tidwell, and Ebony Blake as Chiffon, Crystal, and Ronette. Their beautifully melded voices and knowing commentary, sometimes playing Greek chorus behind the action, sometimes egging that action on, was a fabulous thread throughout the show. And for me, seeing this now after a long time, seeing it as an adult in this particular time and place, there was an extra layer to the musical that Chiffon, Crystal, and Ronette provided the grounding for.

Having a drink at the Gerding before the show, my date for the night, Liz, discussing a recent documentary she'd seen, remarked, "I'm always aware of my privilege as a white woman, but what I hadn't been as conscious of was how hard it would be for me to give that privilege up." It was something I'd been thinking a lot about, myself, recently, and the statement stayed with me as I watched the show: Chiffon, Crystal, and Ronette sitting on a rundown Skid Row staircase, Chiffon, Crystal, and Ronette always on the streets, watching as more and more privilege was heaped on white Seymour and white Audrey and white Mushnik. As the action ramped up and the rift between the haves and the have-nots got wider and more dangerous, I realized what I hadn't as a teenager who'd been in love with the music and the fiendish humor in the play: this thing, underneath it all, is about some pretty serious stuff. And our hero, for all his clumsy sweetness, who, yes, only goes along with this man-eating-plant stuff when the victim feels, you know, kind of deserving, nevertheless lets privilege keep him from attempting or even considering destroying the plant until he feels sure that destroying it won't take away what he's gained.

Along with all this layering (and for another really interesting perspective on that, read Bob Hicks' review here), Portland Center Stage's production of Little Shop of Horrors is smart, hilarious, beautifully produced and a flat-out rocking kick in the pants.

It's playing at the Gerding Theater from now until October 16. More info is here. Thanks to Patrick Weishampel for the pictures.

*Above, I said the Portland Center Stage production is totally classic, but that's a slippery description. It isn't completely the same as the 1986 movie I fell in love with, which, itself, wasn't totally classic. The original was a 1960 move which I'd never heard of. Then came the off-Broadway musical that opened in 1982, which was eventually filmed, with a bunch of changes, including the ending, in the 1986 Frank Oz movie. It had been long enough since I'd seen the movie that, as we moved through the second act, I started to realize I didn't remember how it ended. I'm not going to tell you how it ended, but I'll say it's far better than the film.
Posted by Gigi Little at 1:06 PM 4 comments: