Heading out into the lobby of the Keller Auditorium at first intermission of Swan Lake last night, Stephen said, "The corps de ballet is very... together, very..."

Looking for the right word and I anticipated it and jumped in with that tiny pride you have every time you one-up your partner in linguistic prowess.

"Yes, tight. That's the thing you often hear in reviews, that the principal dancers are good but the corps de ballet was sloppy. I was very impressed."

"That means the members of the company who dance together in a group, as opposed to the soloists."

So, there's my full disclosure: Linguistic excellence? Balletic knowledge? Not so much. But I love ballet, the skill, the beauty, the strange magic of learning a story almost completely through movement, and I particularly enjoyed Oregon Ballet Theatre's production of Swan Lake. The word I kept using to describe things last night as we were leaving the theater, a word that sprang easily to my tongue, was delightful. 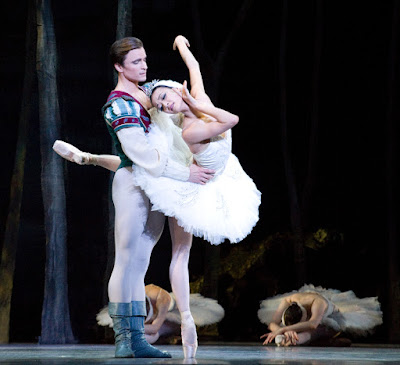 It's an interesting production because it is not the classic Swan Lake based on the 1895 revival with choreography by Marius Petipa and Lev Ivanov, and it's not the classic Tchaikovsky ballet updated with completely new choreography. Artistic Director Kevin Irving's adaptation is an amalgam including input by Petipa and Ivanov and modern choreographers Nicolo Fonte, Kevin Irving, Anthony Jones, and Lisa Kipp. Not only that, but the storyline has been changed to add a completely new element and that takes the story in a completely different direction and toward a different ending.

I'll only say that about the changes, because I hate spoilers, but what I can say is that I felt all the aspects of OBT's Swan Lake, the old choreography and the new, the classic story elements and the new, were assembled beautifully so that the whole production felt seamless and integrated.

And the orchestra under the direction of Niel DePonte was - I'll use my initial not-very-ballet-chic word again - tight. Beautiful. And the dancing, led last night by Xuan Cheng and Peter Franc, was quite good, with particularly lovely use of the corps de ballet. The white swans swirled and churned like a murmuration across the stage. At times, to me, they seemed to symbolize more than enchanted swans, becoming, here, a hint of storm, there a spread of fog as a night moved toward morning. 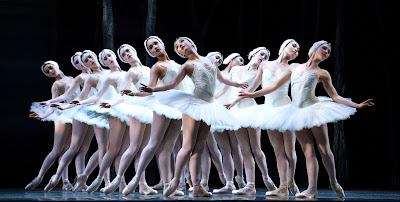 One of the most surprising things to me was the humor. The scene of the ball in Act 2 is rife with it, fashioned beautifully through the use of both choreography and storyline. I didn't know I could laugh so much in a ballet. And there was one particular moment I never thought I'd see in a ballet - and of course, that spoiler thing, again: I can't say what that moment was. I wish I could. All I can say is that between that moment and the burst of laughter that followed was a half second of silence in which I think the only sound in the auditorium was the surprised "Oh!" that jumped out of my mouth.

Here are three final words in my parade of words about OBT's world premier production of Swan Lake: go see it. It's a gorgeous and delightful evening and you don't need to know any fancy ballet terms in order to come out of the theater feeling smart and full of a little more joy.

Photos of  Xuan Cheng and Peter Franc and the company members of Oregon Ballet Theatre courtesy of Randall Milstein. 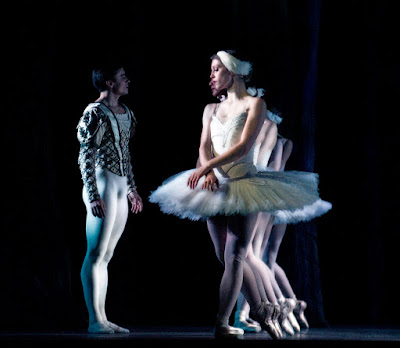 a moment in the day; or, a transcript of what i just said out loud as i tried to tear myself away from facebook in order to get to the writing i was so excited to carve out this precious little evening time to do

His Eye is on the Sparrow at Portland Center Stage 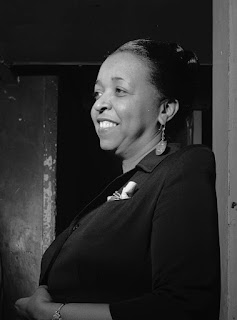 Ellen Bye Theater at Portland Center Stage Friday night. Oh, I knew she was a singer who had popularized wonderful old songs like "Stormy Weather" and "Am I Blue." I knew she played Berenice in The Member of the Wedding. But I knew nothing about her life.

It was wonderful to sit in that intimate theater and watch her story unfold through narration and song. His Eye is on the Sparrow, written by Larry Parr, is essentially a one-woman show (I say essentially because she's accompanied by a piano player), in which Ms.Waters, played by Maiesha McQueen, guides us through her troubled childhood, her sad young life as a grudging teen bride, her surprise rise to stardom accompanied by feelings of inadequacy in the face of the racism and sexism all around her, her seclusion as an older woman followed by her return as a gospel singer - and most of all, her songs.

Fabulous songs. "Heatwave." "Old Man Harlem." "Franky and Johnny." "Black and Blue." Songs beautifully performed by Maiesha McQueen in a voice that ranges from sweet to deep to playful to mournful, and a performance that, above all, rings authentic. One of the biggest pitfalls of a show like this one is inauthenticity, and McQueen's performance is not a modern take and not a pastiche. It's the real deal. 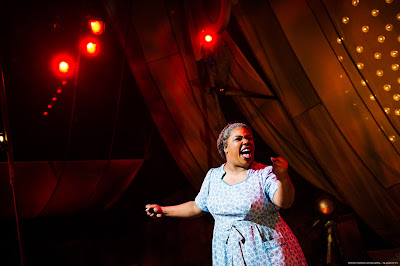 I loved the whole of McQueen's performance. She's funny and heartbreaking and brassy and dynamic and again, again, so authentic. Authentic to the time period(s) and authentic to the human experience.

I have to admit I don't tend to be interested in stars or the lives of stars. Packed houses on concert tours and actors' searches for that perfect movie role aren't stories that move me. But His Eye is on the Sparrow is not a play about stardom. It's a story about human relationships, the struggle to make connection. It's a story about race, and the ways people internalize the unfair inequality around them. It's a story about womanhood.

And OK, yes, I lied: it's a story about stardom. But what that particular thread in the production said to me had little to do with stardom, per se.  Stories about stars are often about persistence. How they struggle to realize their full potential, how they persevere to reach that place in the spotlight. The Ethel Waters I saw last night at Portland Center Stage seemed to have the spotlight handed to her in a gift-wrapped box, and the persistence that marked her life centered around other things. Real things. Most of all, simply the struggle to feel equal in the world. 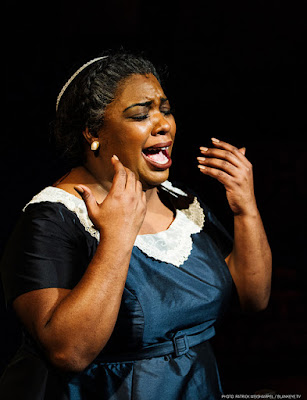 As I left the theater, a phrase kept playing in my head. She was a star, and she just wanted to be on par.

Silly rhyme notwithstanding, this was the takeaway that stuck with me the most. She had achieved so much - stints on Broadway and the concert stage, appearances in the movies and on TV, record contracts; she was the second African American woman nominated for an Academy Award (Pinky) and the first African American  woman to have a lead role in a television series (Beulah) - and she still felt less than. Less than her fellow man. Less than her fellow White man.

When she persisted, she was called difficult. And perhaps she was. But these were difficult times for Black women. Still are. I can't help it: my mind goes to the recent Senate Judiciary hearings on Jeff Sessions and two women's voices (Elizabeth Warren's and Coretta Scott King's) silenced in their attempt to speak truth about racism. Nevertheless, she persisted. This is what Ethel Waters does throughout her story. She persists. Not toward the kind of achievement that wants to be measured in Academy Awards and television ratings and Twitter followers, but toward authenticity. 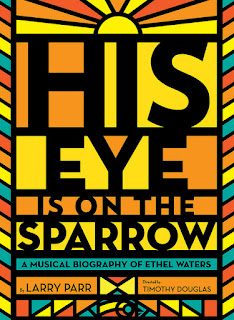 Somewhere in the second half, I was compelled to fish a pen out of my purse and scribble on the back of my program a line Waters says. She's describing White people and the line is both biting and sympathetic. "Their souls have been pushed down somehow."

This felt so true and so ironic. With all the efforts, conscious and unconscious, that White America has made to put themselves - ourselves - above, our souls have been pushed down.

But what happens during the play: you feel lifted up. By Ethel Waters' music, her truth, her hilarious barbs, her persistence. And it isn't just her. I said before, His Eye is on the Sparrow is essentially a one-woman show. Maiesha McQueen's partner on stage is Darius Smith. Beyond being musical director of the production, he plays the piano for her performance beautifully, but his presence is more than that. From the way he escorts her through the theater in the opening of each act, to his quiet attentiveness to her performance, Smith seems to be some sort of opposite Greek chorus. Rather than commenting on the action, telling the story for her, he listens. He sits back and actively lets her tell her truth. He attends with grace and respect, and with this, he seems to represent that something that Ethel Waters always deserved. 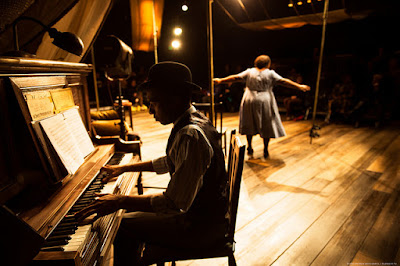 His Eye is on the Sparrow runs through March 19th. More info is here.

Thank you to Patrick Weishampel for the photos. Theater poster designed by Julia McNamara. The picture of Ethel Waters from Wikipedia Commons.

a moment in the day; or, a short transcript of the introduction to some old radio show i was just listening to while trying to escape from the horrors of reality

"We are all doomed!" said one philosopher.

It is inevitable. It is fate. It is destiny. Our lives hang on a slender thread from one day to another.

We place our daily existence in the hands of total strangers. And pray for the luck of the draw.

We do it when we drive down the highway.

When we fly in an airplane.

We do it when we elect a president.