How to Make Holiday Fudge

Step 1: At the store, find out marshmallow fluff is actually gelatin-free and there's a recipe right on the jar, so decide in the moment to forget about the recipe you originally had in mind and go with this instead. This recipe calls for different things, like butter and chopped baker's chocolate and an insane amount of sugar (6 cups, it says).

Step 4: Have your husband go out and buy butter.

Step 5: Day two. Cut the dried cherries in half with scissors. So, so sticky. Find a pit in one and tell yourself you are a genius for cutting the cherries.

Step 6: Combine butter, sugar (use much less because ick), and erroneous sweetened condensed milk in a large pot. Bring to a rolling boil under medium heat, stirring continuously. Boil for 4 minutes or until your candy thermometer registers 238 degrees.

Step 9: Pour into dish lined with parchment paper. Use paper towel to sop up the oil that pools on top. The fudge tastes nice and smooth and you're giving it to people who love you and they won't mind if it looks a little wonky, right? Find some purple sugar in the cabinet. Purple is a holiday color, right? Sprinkle purple sugar on top to make fudge look better. It melts instantly and disappears.

Step 10: Repeat steps 6 through 9 but with pecans this time. Maybe it'll look better in the second batch. Hold off on the purple sugar until you can give it time to cool and set. Purple sugar is festive. Purple sugar will save Christmas.

Step 11: Your husband comes home from work. He sees the fudge pre-purple-sugar and says it doesn't look good and you need to start over.

Step 13: Your husband says use the recipe he finds on the package of chocolate chips, which doesn't need a candy thermometer.

Step 14: Go to the store at five o'clock on the day before Christmas Eve. Park way far away on the side. Slowly work your way through the soul-crushing pileup of shoppers and shopping carts churning through the aisles. Read the cans of evaporated milk three times to make sure.

Step 15: Where the hell is the parchment paper? You need more parchment paper. There are too many people moving around you. Decide to be agoraphobic and try not to scream as loud as that little kid who's wailing bloody murder in the next aisle over.

Step 16: Decide you're going to have to ask someone where to find the parchment paper. There's a guy crouched on the floor shelving something at the end of the aisle, but he's singing a very intricate rendition of Silent Night and you don't want to disturb him.

Step 18: Where the fuck is the fucking butter?!

Step 21: When you get home, your husband has taken the fudge out of the pans and it's piled up on two plates in the kitchen. He says, you know what, it does taste smooth, why don't we roll it into balls and cover them with crushed nuts and make them into truffles!

Step 23: Let him crush the nuts in the food processor. Roll the truffles together. He makes a small chuckle in the back of his throat and says, "This is like that I Love Lucy episode." Put your hand up beside your mouth and call out, "Let 'er roll!" 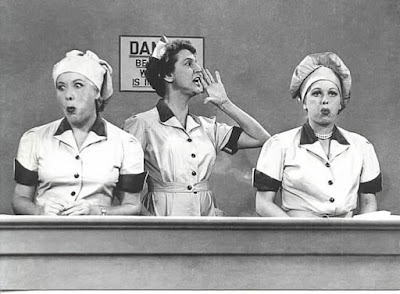