Read your diary. Try to find the part of your past that will serve the essay you're trying to write.

Get lost. Get cushy in the lostness of all the details behind the blind blank of your memory.

You're sixteen. You just got a haircut and a perm. You're bursting with the bigness of your life.

I'm getting my braces off, on Tuesday. Noni and Coco are here, but they're going to be going home to the Summit before Tuesday. Noni loves my hair. She says I look like a cross between Brooke Shields and Audry Hepburn. I wonder what Audry Hepburn looks like.
Posted by Gigi Little at 7:13 PM No comments:


I was captivated even before The Whipping Man started last night at the Gerding Theater.

Down across the darkened stage, in the little arched window over the front door of the DeLeon house, I could already see the rain. A hint of glitter across the glass. I felt smart for noticing - and then wondered if they'd "turned on" the rain this early just to give people something to feel smart for noticing. As it turned out, the rain was an almost constant element in Portland Center Stage's production of The Whipping Man, a perfect constant, reminding me of the harshness of the world and the fragile safety of home but also helping create the intense crucible that this particular home was intended to be.

The rain also reminded me of the Noah flood story. And the plagues of Egypt during the Exodus. Because this play, which takes place just following the South's surrender at the end of the Civil War, concerns two former slaves and one former master, all who follow the Jewish faith. Caleb DeLeon, a Confederate soldier, returns home, wounded and in agony, on the eve of the Passover. The only folks left in the house are Simon and John, two former slaves, newly liberated and still coming to terms with their freedom as well as their past. The end of slavery seen through the prism of the Jewish faith is great irony, of course, as illustrated perfectly when former slave Simon [Gavin Gregory] officiates the DeLeon Passover Seder by singing:

It's really thought-provoking stuff, but the Jewish-slave connection isn't the entire heart of the story. There are also loads of secrets and loads of tension between these three complex, fully-realized characters. I thought the acting was superb. I last saw Gavin Gregory in the campy musical The 25th Annual Putnam County Spelling Bee, and I'm amazed at how beautifully differently he played the two parts. Carter Hudson as wounded soldier Caleb is a master at portraying pain, both mental and physical, and Christopher Livingston gives the young John a great mix of bitterness and humor.

The set is magnificent. The beautiful ruin of an antebellum home - so finely detailed and so realistic, at least to my layman's eye. Shadow and rain and evocative lighting direction make it even better.

As a pretty staunch atheist with a fascination for the Bible, I had an interesting reaction during the Seder that played out in the second half of the production. During the first act, Simon tells Caleb you can't be a fair-weather friend to God. I don't remember how he actually puts it, but that's the basic idea. Caleb has lost his faith on the battlefield, says he searched for God, besought God, and God wasn't there. Knowing [even on a small scale] what the soldiers of the Civil War went through, what the slaves of the South went through, it seems almost laughable that Simon would defend a faith in any god. But for just a moment, later, during that Seder, I believed him.

Not that there was a God - I didn't suddenly believe that God is a real thing - but just as you can have faith in a fictional character you read in a book or watch on stage, I had a sudden faith that the God of the world of The Whipping Man did exist there. I can't even remember today what specific bit of story, what bit of dialogue provoked the reaction in me. I just know that it hit me so unexpectedly that I nearly missed one of the big surprises in the play [a surprise that would eventually lead to what was, for me, one of the most satisfying endings in any play I've seen] because I was busy having whatever is the opposite of a crisis of faith.

Maybe it was the Sazerac I drank at intermission.

But God was somewhere in there.

The Whipping Man is still playing at Portland Center Stage - but only through March 23. You can check it out here.
Posted by Gigi Little at 2:48 PM No comments:

A moment in the day: moving


I sit at my new desk, facing my new wall. It's a dry erase board. Someone put my name on it, my name and an arrow, for the computer guy so he'd know where to move my computer when he got me all set up in here, my temporary workspace while they gut and remodel the Marketing Department. About half the Marketing team is in here, organized in a close ring around the inner wall of the conference room. Now that I'm all moved in and the computer is up and running, I could erase my name from the whiteboard but I don't.

That impulse to make a home.

When I moved into Powell's Industrial Warehouse a year ago, I brought with me as much as I could of my old desk: my tape dispenser, my cubicle decorations, my sock monkeys. 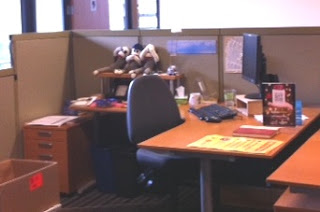 This afternoon as I packed it all up, my supervisor ducked under my desk to pull my computer out. He pointed at the small wooden box the computer sat on.

"Does it matter to you whether you keep that or not?" he said.

I didn't know what purpose it served.

Now, and for the next three weeks, maybe a month, this whiteboard is mine. And those dry erase markers, the blue one, the orange one, the two red ones, those are mine. I'll probably never write anything on the whiteboard but I could if I wanted to.

I arrange my desk. I arrange my snowflake. I didn't want to throw away the tiny snowflakes Lenore and I stamped out of paper back before the holidays. Three sat on my desk all winter - then two when one disappeared. No real reason to keep them there - just that at first they were cute and then they were mine. It's spring and there's no need for paper snowflakes, but when I tossed one in recycling this afternoon - a tiny flick of paper into the bucket - it hurt to let it go.

Gently, I place my last snowflake on my new desk next to the lamp that I never turn on. Behind me, coming in through the open door of the conference room is the chug-chug of the warehouse and the sound of the Rolling Stones.
Posted by Gigi Little at 8:00 PM 1 comment:

I'm excited to jump on Forest Avenue Press' announcement today that their first work of fiction will be A Simplified Map of the Real World by Stevan Allred.

I don't know that I can say it better than they do:

This collection is full of heartbreak and humor, and one of the things I love about it, beyond getting to wonder, as I read from story to story, which characters I'm going to meet up with again and in what new and interesting ways ... uh-oh, I just got so excited I got lost in my own sentence ... but one of the things I love is how fully realized his fictional town of Renata, Oregon, is. How deeply I come to know this place. 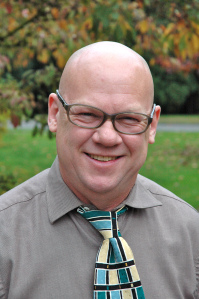 Those in the Portland writing community know Stevan Allred as the co-teacher (along with Joanna Rose) of the well-known Pinewood Table critique group. You can find them on facebook here. To the right is the man, himself. I had to steal this photo of Stevan off of Forest Avenue Press' website because of the natty tie.

As graphic designer for FAP, I've been working closely with them on the look and feel of the inside of the book - and having a great time working on my cover design. We won't be revealing the cover for a while, but I do want to say what a pleasure it's been getting to know this book so intimately as I figure out just what imagery / typography / layout / design should become the face it gives to the world.

A Simplified Map of the Real World will be out in September, launching ceremoniously on Thursday, September 12th, with a reading at Powell's City of Books. There are more acquisitions to come. FAP is currently mulling the many amazing submissions they've received in their recent call for quiet novels. Check out more info about the press and about Stevan Allred's upcoming book, on the Forest Avenue Press website here.
Posted by Gigi Little at 12:37 PM No comments: