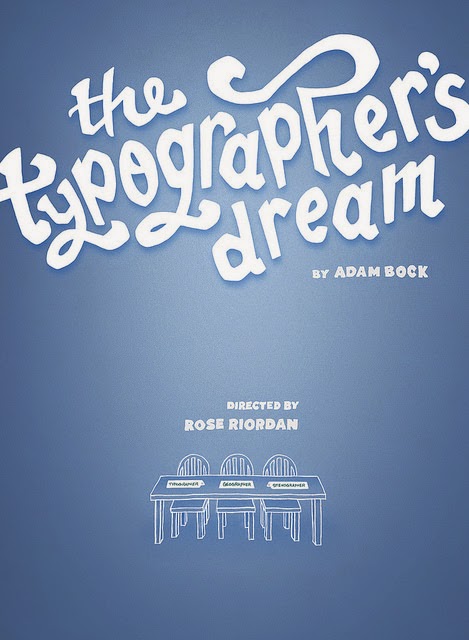 Friday night at Portland Center Stage, after all the applause, as my hands were trying to stop stinging from clapping so hard, Stephen turned to me and said, "I don't know what the hell that was, but it was delightful."

It was also smart and surprising and hilarious and thought-provoking and fast-moving.

So fast-moving. Whip-crack dialogue and pingponging themes and concepts - and all I kept thinking is, this is my kind of play. Which is to say just so slightly over my head but in a way that leaves me breathlessly fascinated. 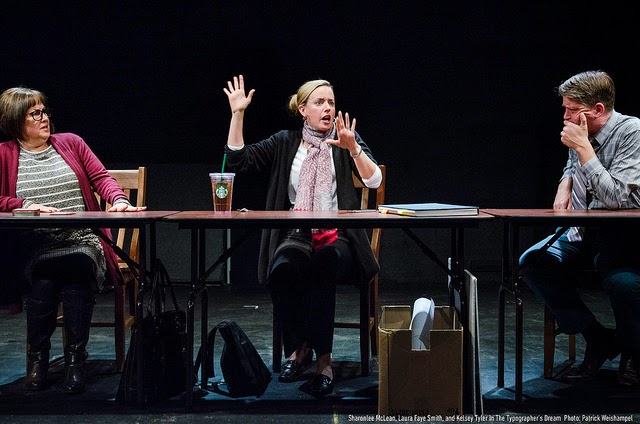 I want to pay for another ticket for another go-round (and if you know me, you know I'm painfully cheap). Not because it was so fast moving and just so slightly over my head, but because I just want to see it again.

And with the material as it is, the actors easily could have gone over the top. Laura Faye Smith as Annalise the Geographer easily could have been too chirpy, easily could have been irritating, but no. Delightful. And when you think you know every note of her character, she gives you new sides - care, sadness, a fabulous rant - with that same just-at-the-edge-but-not-too-far energy. And she plays an excellent drunk. 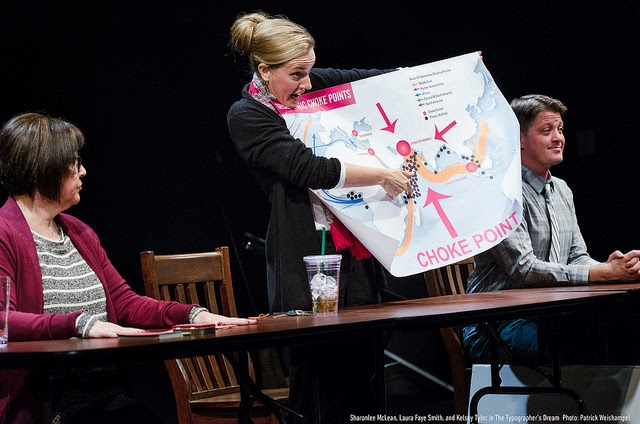 And Kelsey Tyler as Dave the Stenographer. He easily could have gotten one-note with the sweet way he keeps pulling the conversation back to what is so great about stenography. And he easily could have been the annoyingly stereotypical gay man I see so often in plays. But no. Delightful. Funnily vulnerable and real. 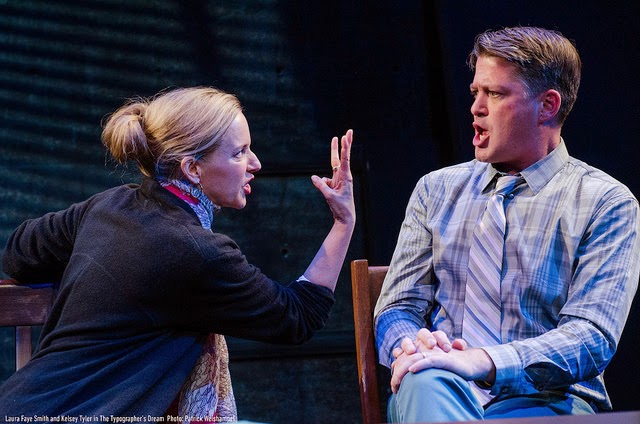 And Sharonlee McLean. Well, she's always delightful. I've been following her career for years, and no matter how varied her characters are, there's always something Sharonlee about it. Quirky and particular. But not in a way that takes away from the individuality of the part she's playing. She has this fabulous way of being very real (her dialogue at times feeling almost adlibbed) while she's also so beautifully odd. Her Margaret the Typographer is, I think, one of my favorite performances of hers. 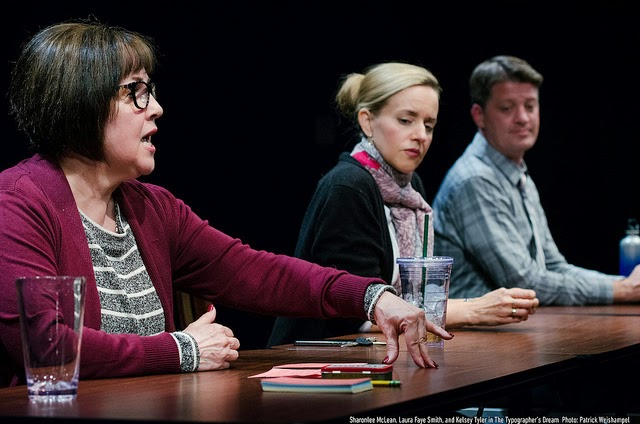 I'm going to try to stop saying the word delightful now. But seriously, you guys, this thing was delightful. I laughed way more than you'd expect about a play about three people sitting behind a long table, talking - raving - about their respective jobs. And of course the play is about far more. One of the devices that I think worked really well to illustrate that far more was the creative use of the fourth wall. Through the fourth wall, the players weren't just talking to us. They were vying for us. The audience's attention became a prize they were each fighting for. Which is intriguing to me as an audience member, but also says something about the themes of the play.

I think part of what playwright Adam Bock is saying in The Typographer's Dream is that we believe we have these connections with each other, these relationships, and we can even profess to love these relationships and be terribly moved by them (as Annalise is when she talks to Dave about his partner Bob, a truth Dave doesn't want to hear), but inside we're all just vying for the spotlight. We're all about our own story.

And what is our story? A lot of the time, it's our job. I've wondered over this fact myself, the urgency with which we identify ourselves with our jobs. In the Marketing Department at Powell's Books, just taking care of business, I catch myself sometimes feeling some silly, unfounded sense of importance. I talk about being graphic designer for a small press just to enjoy that sense of importance - there, I just did it. It's a way to manufacture an identity, but it's more. When we're coiling ourselves up in the cushy security of these personally manufactured identities what we're also doing is using that love to avoid the truth about ourselves.

It's a bleak outlook that emerges from Adam Bock's The Typographer's Dream. At least in my small-brained interpretation of it. A chilly perspective on the human condition, happily, ironically served up in the midst of a delightfully funny evening of smart, smart theater.

The Typographer's Dream runs through November 16th. More information is here. Photos were courtesy of Patrick Weishampel.
Posted by Gigi Little at 7:32 AM 3 comments:

art, writing, and trying to grow a backbone 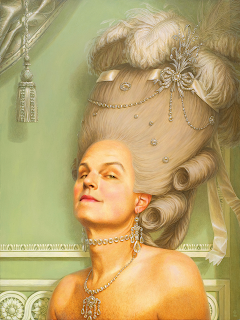 A while back, Stephen and I were contacted by a publisher about collaborating on a coffee table book of sorts pairing a number of Stephen's paintings with flash fiction inspired by those paintings.

The biggest thrill for me was being asked by the publisher to curate the group of writers, each of whom would take one of Stephen's paintings and use it as a prompt to write a tiny original story.

This project was perfect for me. I mean, I personally knew so many remarkable writers.

Making a new computer file and combining all the names into a master list doesn't help. It just makes it easier to see that you have four times the number of writers than you can squeeze into one book.

Part of being a good editor, if I was going to be a good editor, was narrowing down the list. All I had to do was remove a few writers here and there, just whittle down my incredibly long and beloved list, just hack it to pieces, leaving writers I admire, leaving friends in my wake. 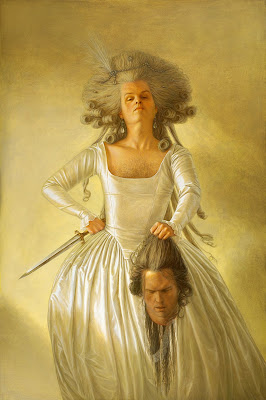 A Friday night, Stephen and me at the hairdresser's, me with the big glass spaceman-suit bowl breathing hot air over my head, and my master list in my lap. 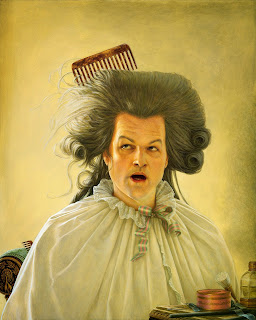 Next to me, Stephen named names and made comments that I couldn't hear over the drone of my spaceman-suit head. We decided against one of the names, someone we both know well, and running my ink pen across that name was like running that ink pen across the face of that friend.

Backbone. That's what you're suppose to have if you fancy yourself an editor of a book. If you make your decisions based on personal consideration, you're not editing a book, you're just fooling around.

Backbone. That's one of the benefits I hope to get out of my role in this project. Don't ask me how I got to the point in my life where I'm taking things on for the right reasons, but the aspects that scare me the most about doing this - are why I need to be doing this.

Under the drone of my spaceman-suit head, I crossed another name off. The friction of the pen moving across the paper was a bee squirm at the base of my spine. Each and every name I had to cross off, people who I knew would be great for the project, people I'd long admired, each and every name... hurt.