I keep putting off posting this because I want to find out about the person who designed the first To Kill a Mockingbird cover. Since it's coming up on the 50th anniversary of the original release (July 11th), Powell's wanted to do a window display, of course. Harper Collins has put out a 50th anniversary trade paperback, hard cover and slip-cased edition and has based them all graphically on the original. 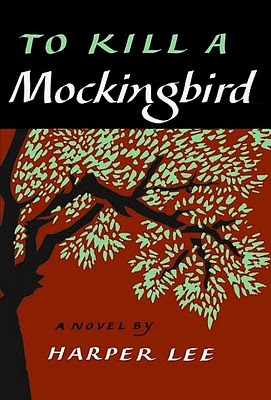 That's the slip-cased edition. A darker color scheme than the trade, which is what I based my window display on.

I wanted to talk about the person who originally designed that illustration but couldn't find anything out--and it's getting late. So, I'm just going to go ahead and include my knock-off graphic for the window. The blank green space is where the books themselves get piled and faced-out for display.

Posted by Gigi Little at 1:45 PM No comments:

I keep forgetting to post my own spotlight from The Pacific Northwest Reader. What kind of failure of a furious self-promotor am I? Figured I'd give you a few paragraphs from the opening, and since that's more than most of the spotlights I've done on this book, I'm just going to shut up and let it speak for itself...

"Never mind that I moved to Oregon to find true love in a man I hardly knew. Who I’d only met through e-mail. Who was probably gay. Not to mention the whole thing about me running away from the circus. That stuff is incidental to the way I love this place. Or maybe it’s not.

"I’m the kind of perpetual tourist that comes from having spent fifteen years seeing the country but not seeing it. Most of what I saw of America was the inside of a tent. On days off from the circus, we’d hit the road to watch another circus. I was married to a man who lived and loved, worked and played, talked and thought nothing but circus. I tried to adapt. If I couldn’t see Mount Rushmore or Colonial Williamsburg, by god I was going to be happy taking a blurry picture of some historical marker from our moving car. In order to fill the great need for that something else in life, I became desperately fascinated with anything new I could lay my eyes on. Or wrap my heart around. To this day, I’m still a fascinated person. Back then I was just desperate.

"In 2003 I took a trip—not a circus trip, just a me trip—to Portland, where I saw an art exhibit. The artist painted himself in 1930s Hollywood gowns. This seemed brave and strangely sexy. I sent him an e-mail fan letter, which turned into a year’s correspondence, which turned into a decision to change everything.

"Oddly, in all my fifteen years losing my pants across the country—which is to say I was a clown —I never played Oregon. There was something comforting in this as I packed to leave my then-husband in autumn 2004, as if the Portland rains could wash away every last clinging whiff of cotton candy and elephant urine. And my old life."

[here's me in my new life, along with the aforementioned "artist"--a painting he did for his last show at froelick gallery] 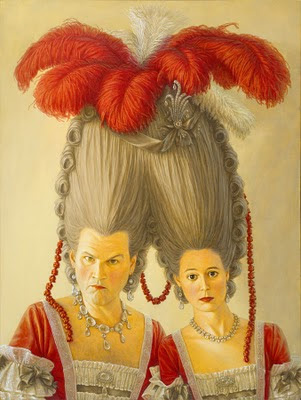 [alright, i feel kind of funny posting my own bio, but in keeping with the rest of the pnw reader spotlights, here's mine from the book...]

Gigi Little now works as In-Store Merchandising and Promotions Coordinator for Powell’s City of Books. Her short story “Shanghaied” was published in the book Portland Noir, and during her circus days, she wrote and illustrated two children’s picture books: Wright Vs. Wrong and The Magical Trunk. She and her husband, Stephen, live in Northwest Portland.
Posted by Gigi Little at 7:38 AM No comments:

Down to the bank, then the food carts on my lunch break. Bits of stories caught in the here and there of different cell phones all along the way:

...She seriously thinks her mom is a wacko...

...[boy listening quiet while his feet dance a little break dance slide, up and back, up and back along the sidewalk]...

powell's in the news

OK, so do you want to know just how self-involved I am? I'm posting this link to a cool article the New York Times did about the big craze revolving around Steig Larsson and Scandinavian mysteries--not because I think it's neat that the Times snapped a picture of a display Powell's did for our current big Scandinavian Mystery Sale--but because, see that sign, that very simplistic sign that says 30% off, 30% off? I made that sign. 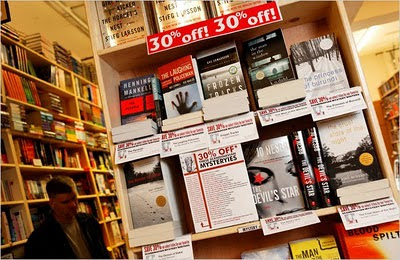 Photo courtesy of Mike Davis of the New York Times.
Posted by Gigi Little at 12:24 PM No comments:

One of the traditions Stephen and I have is making wacky home-made cards for each other for birthdays and such. Here's an example of why it's cool to be married to someone with, not only an incredible artistic eye and hand, but a brilliant fashion sense. Below is the outfit Stephen has designed for me, which I will be wearing out to all the most chic social engagements on our calendar... 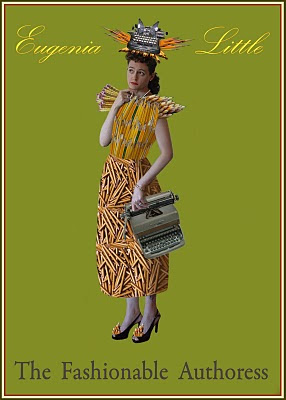 Click to see the detail. Those are all pencils--even on the shoes. He used a photo of me from last year's Portland Noir reading at the Blue Monk. I don't think that typewriter is any heavier than my real bag.
Posted by Gigi Little at 7:25 AM 2 comments:

pnw at powells and haida art

Thought I'd create a window display celebrating the Pacific Northwest for the month of June at the City of Books. Powell's has a number of cool PNW-related sections throughout the store, including a PNW featured area in the Orange Room and a PNW Mysteries section in the Gold Room. I used the window display mostly to point out where these different sections are, but also to highlight some books and some cool non-book items we have that are decorated with some very slick haida art.

For the graphic, I put together a bit of my own haida-esque art, using Adobe Illustrator. Below is a quick image of it, excluding the blank red space below that provides the backdrop for the books I displayed.

Of course, my aim was to put together a window display, not spend time having fun learning about haida art--but I'd love to learn more about this style. For example, the very particular design elements that look like symbols embedded in the imagery. One of the most interesting things is how one animal might have many different faces set in its body. And eyes, eyes, eyes everywhere. As if saying life is always connected to life. It's an odd and particular poetry.
Posted by Gigi Little at 1:38 PM No comments: 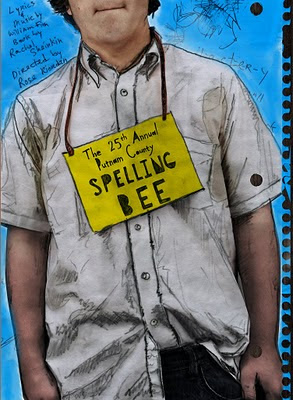 On Friday night I saw The 25th Annual Putnam County Spelling Bee at Portland Center Stage. Very funny. The inimitable Darius Pierce (I swear he's not a man, he's an army; he's in everything I see, it seems) and Suzannah Mars make a great team. The moments where Mars' character Rona Lisa Peretti blurts out her thrill over the cruelty of the game were great. The whole cast was really strong. It was a musical, and I can be funny about modern musicals, but the singing was all-around beautiful. I thought the staging--for the musical numbers and the non-musical parts--was very smart and nicely camp. A trampoline at one point was used in just the perfect way and just the perfect amount.

For me, the places where the pathos and tension worked best were the ones where they stayed in close with the competition. Also successful, I thought, was the device of including audience members in the spelling bee--something that could have been either a throw-away or annoying if not done well. The crowd contestants were even worked into a dance number at one point--artfully done and very funny.

Below is "Comfort Counselor" Mitch Mahoney (played by Gavin Gregory). Loads of pizzazz and a rockstar voice. 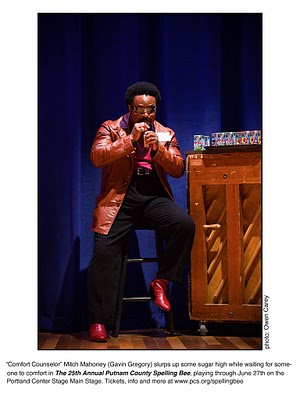 I loved the thing with the juice boxes.
Posted by Gigi Little at 6:41 AM No comments: