When I put out the call for submissions for City of Weird, there were a few authors I gave nudges to in hopes that they'd submit. Karen Munro is one of them.

I first read her work when we were both contributors to a lovely anthology called the Pacific Northwest Reader, edited by Carl Lennertz and published by Delphinium. Karen's was hands down my favorite essay in the book, and I've followed her work with delight ever since, including great otherworldly stories like "The Cure," published on Midnight Breakfast and told from the point of view of a reluctant werewolf:

I should have known something was wrong when I woke up naked on the kitchen floor next to a half-empty bag of puppy chow, full as a tick.

Karen is particularly good at working the confluence of two emotions, as she does with loneliness and humor in "The Cure."

I went back to Heather. I know. I wasn’t her husband anymore. And she wasn’t my wife. She owed me less than nothing. But the junkyard where I chowed on the dog was in her neighborhood, and I was sure that wasn’t a coincidence. When I changed, something drew me there. Sooner or later I was going to wake up at her doorstep, and after that—maybe I’d wake up in her apartment. Full, bloody-mouthed. I wouldn’t be the first guy who went after friends and family when he turned into a wolf. And it wouldn’t be the first time I’d caused her pain.

Karen deftly navigates the intersection between need and horror in "Pringreen," published on Split Lip Magazine:

That’s Pringreen. There—that mantis of a man propped on the corner with his hand in his pocket, fondling something. A dent in the top of his stovepipe hat as if someone put it there with a single outraged blow. The tails of his coat dusty and soiled. I think he’s looking at you. If he is, if he comes this way, I’ll go.

But perhaps he’s just considering the bakery sign behind us, or that scruffy fellow on the curb. Perhaps I’ve misjudged the angle of his gaze. You seem a regular, a decent sort of man. Not one of Pringreen’s. But it’s so hard to tell what secrets a man has heaped up inside.

So, yes, I nudged Karen about submitting a story for City of Weird. I was so impressed with her imagination, which is both beautifully fanciful and incredibly brainy. I knew she was the perfect candidate for this collection, and when I finally made my decisions about the story submissions I'd received and had my publisher take the blinders off and could see who had written the stories I'd chosen, there she was.

Karen's story "The Color off the Shelf" deals with many fascinating, intersecting themes and topics: the power of books, race and the whiteness of Portland, the allure of the impulses that scare us. Malcolm, a young black college student working on a dissertation about the African American tradition of toasts and boasts, is drawn to a section of Powell's City of Books that he never knew existed, a dank basement labeled as "Deep Storage." Down there, he discovers an old, deeply racist book.

The grown up Negro partakes, as regards his intellectual faculties, of the nature of the child, the female, and the senile White . . .

The passages that Karen included in her tale are so offensive they seem unreal, yet she took them almost word for word from actual existing books that made up a genre known as "scientific racism," a pseudoscientific study of techniques and hypotheses meant to support or justify belief in racism, racial inferiority, or racial superiority.

I got together with Karen one day to chat and eat cake, and she surprised me by telling me that the impetus for her story was the fact that H. P. Lovecraft, the man commonly known as the godfather of "weird fiction," the genre celebrated in City of Weird, was a notorious racist. Like really, really racist. And it's in his  stories. It was a fact that I hadn't known. I loved finding out that "The Color Off the Shelf" was a direct reaction to that. Karen drew on the old African American tradition of toasts and boasts, a form of narrative poetry: another thing I hadn't known about before Karen gifted me with her story. As Malcolm enters the mysterious "Deep Storage" he recites one of the most famous toasts to calm his nerves. 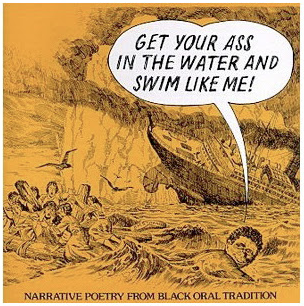 Looking for any imagery I might find surrounding toasts and boasts, I came across the above album cover for a recorded version of a book called Get Your Ass in the Water and Swim Like Me: Narrative Poetry from Black Oral Tradition. More info on the book is here and the CD here. I don't know where the image is from, but it depicts a scene from the very toast that Malcolm turns to...


“Shine was downstairs eating his peas,” he began. His favorite toast, the ballad of “Shine and the Titanic.” The wily, smart black man escaping the white man’s shipwreck. The walls of the staircase seemed to be getting narrower, and he needed to concentrate on something. At first his arms had been almost fully extended—now they were bent at the elbow like chicken wings. A sour smell curled up the stairs to meet him.

“When the goddamned water come up to his knees.” The staircase had an angle to it, he was sure. A kind of disorienting cant, as if a giant finger had flicked it from one side.

“The captain said, ‘Shine, set your black self down.’” He paused and looked back. Behind him, the stairs soared like a sheer wall. Inconceivably distant and far above was the little wooden door he’d come through. He swallowed. “‘I got ninety-nine pumps to pump the water down.’”

The book that Malcolm finds at the bottom of the nightmarish staircase grabs onto Malcolm and won't let go - or is it Malcolm who won't let go? "The Color Off the Shelf" is about the ways in which we can be drawn to the things that terrorize us - but it also mirrors the way we as readers, film-watchers, art-lovers can let our appreciation for art cloud our judgment. We don't want to admit to the racism of people like Lovecraft because we so enjoy the other things those imaginations have churned out. Is it OK to love the art if the artist is so deeply flawed, if the deep flaws carry through to the art we love?

What I love is that the power of books works both ways. We can't change the fact that such an important figure in horror fiction's canon (and many more figures beyond that) held such offensive beliefs and embedded his art with it. But an artist like Karen can come along and turn that dark magic into something beautiful.

Karen will be reading from her story at the last official City of Weird launch reading, Monday, April 17th at VFW Post 134 in Portland, where one of the stories takes place. More info on it is here.

An interesting article about Lovecraft's racism is up on Salon here.

A little more info on toasts and boasts, with a rendition of "Shine and the Titanic," as well as the toast "The Signifying Monkey," a children's tale about a lion and a monkey, is here.

Posted by Gigi Little at 7:13 AM No comments: