Recently, I had the privilege of designing the front cover for Liz Prato's upcoming collection of short stories, Baby's on Fire, due out in May from Press 53.

What a great title. I knew they didn't want actual fire in the design, and I agreed that fire would be too on the nose, but I had an instant thought about what I'd do as soon as I started mulling things over.

Here's the original photo I used for the design, which I found at the very wonderful Morguefile. You'll see I rotated it and added some more to the background and then altered the wisp of smoke at the top. Oh, and got rid of the candle or stick of incense or whatever that is, along with its shadow. Really, it was three things that gave me the inspiration for the cover design. One was the quality of Liz' writing, and I think you'll get what I'm saying when you see the design. The second was the fire in the title, for sure. Third had to do with one of the elements you find on the covers of most books of fiction out there. I don't know if there's a term for this thing. The tiny text placed somewhere on the design, which says, "a novel" or "stories."

Not long ago, I had some back and forth with publisher Laura Stanfill (for whom I design book covers for her press Forest Avenue Press) about this element in book covers and whether it's necessary, helpful, a waste of space, a distraction from the design or what. Personally, I like it. It's cute and does help a reader know the kind of book they're buying - but mostly I like it because often book designers use it in fun, clever ways.

With Baby's on Fire, I used the tiny word "stories" as, not an incidental, tertiary part of the design, but one of the most important elements of the cover, which I hope conveys the power of these stories. Because it's not just Baby who's on fire; it's these stories. Here's a sample from the book, to show you what I mean. Spoiler alert: f-bomb coming:

...and while he fucks Shelby she looks up at the sky and notices it for the first time: you can see stars here. All of them. Every star that was ever made, whether it still exists or not, looks down at Shelby in the back of the brown pick-up truck, and they don’t twinkle or glow or any of those other things you expect stars to do. They just burn.

a moment in the day: valentine


The lovely Valentine's Day breakfast Stephen made us is all eaten and both bowls licked by a happy dog, and we sit up in bed, glasses of mango juice and cava. He hands me the card he made me. I hand him the card I made him. We open them simultaneously, laugh and start making comments just about simultaneously. Read the sweet notes inside. Nicholas curled up in the hole made my Stephen's half-crossed legs. We talk about the cards. Share a quick clink of glasses.

As Stephen said when he posted my card image on facebook: "Oh, yes, it's that time again, because our love ain't real if it ain't shared on FB!"

Stephen's card to me started with this glamorous and iconic picture of Marlene Dietrich. 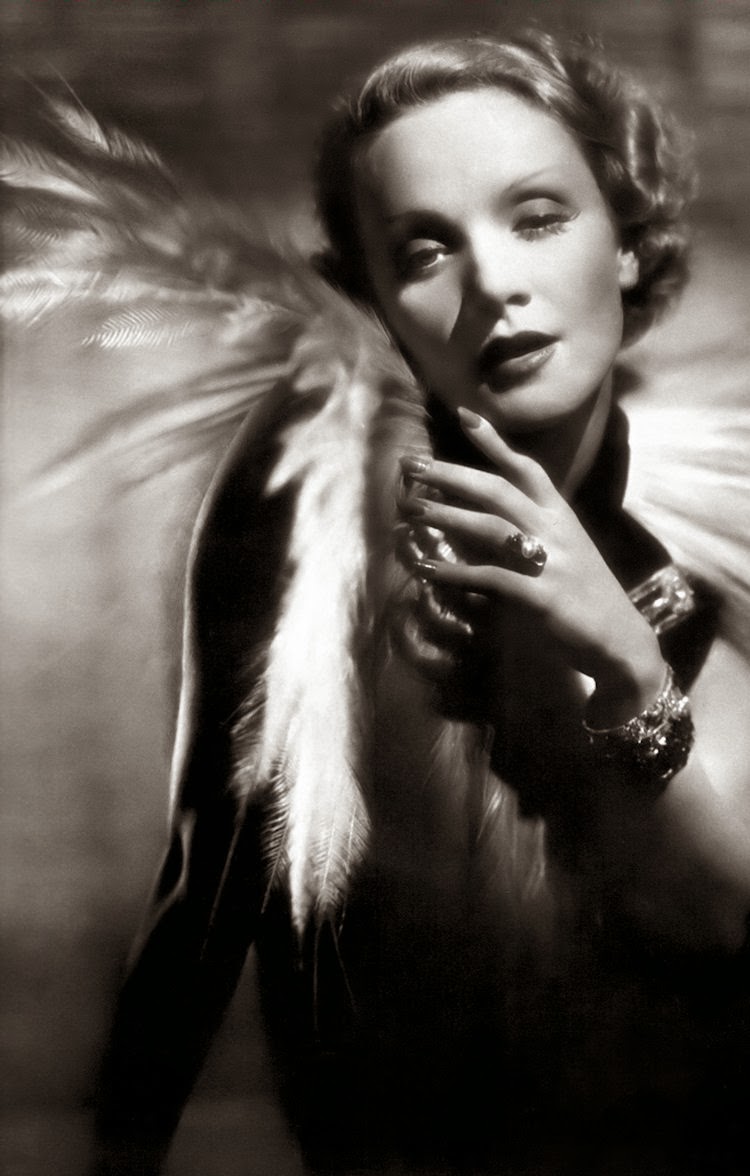 In a way, our cards to each other are like his paintings and my writing - a way to be what we wish we could be, and a lot of the time, it's all about glamour.

Speaking of glamour, below is the original image he used for his second element in the card. La Crawford.


[as a side-note, often when i type the name joan crawford, it comes out crawrod. i don't know why.] 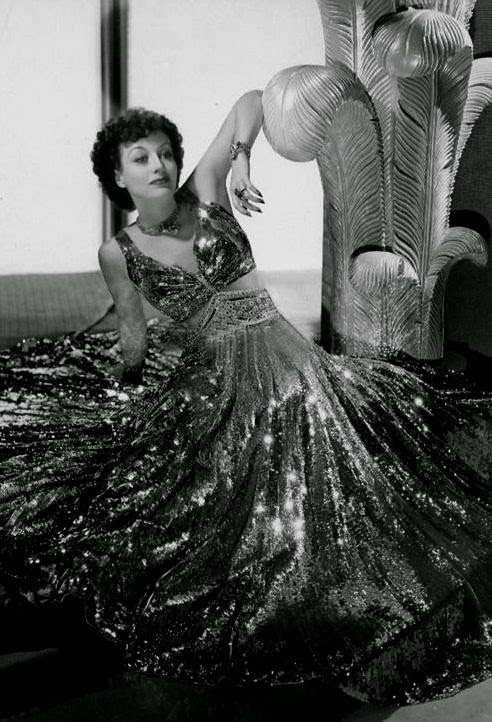 He eliminated Crawford this time around and just nabbed that lovely, very old-Hollywood plaster column shaped like feathers. The finished product: 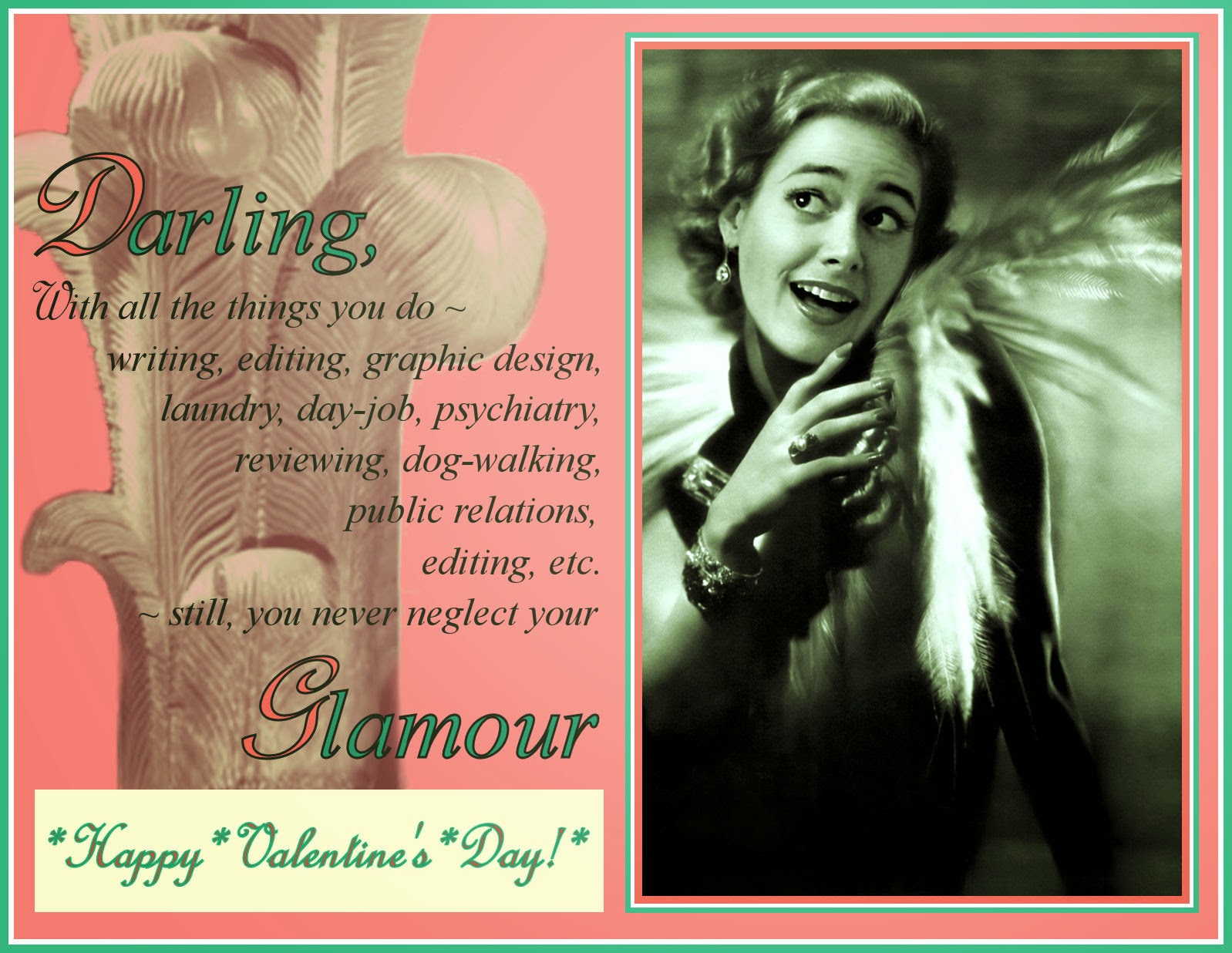 Of course, he's lying when he says I never neglect my glamour. It's lovely to have a husband with such skillz, to Photoshop me some glamour now and then.

The detail (Can you tell where I end and Dietrich begins? Nope.): For my card this year, it was easy to be timely. Stephen's been spending the last couple weeks on stage at the Keller Auditorium supering for the opera Carmen. Tonight is closing night, in fact. I found this lovely old theatrical poster from 1896. 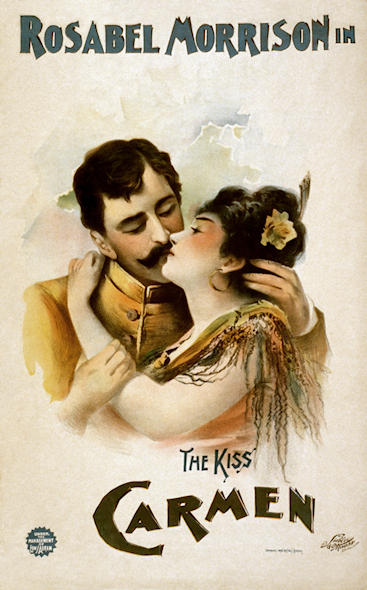 Had to do some work on her very interesting hairline and remake some of the letters to get his name in there. What was the most fun about doing this was that the original picture of Stephen was in black and white and I had to work to colorize it the way I wanted so that it would blend in with the poster. Then I remembered we originally took the picture in color. Oops. 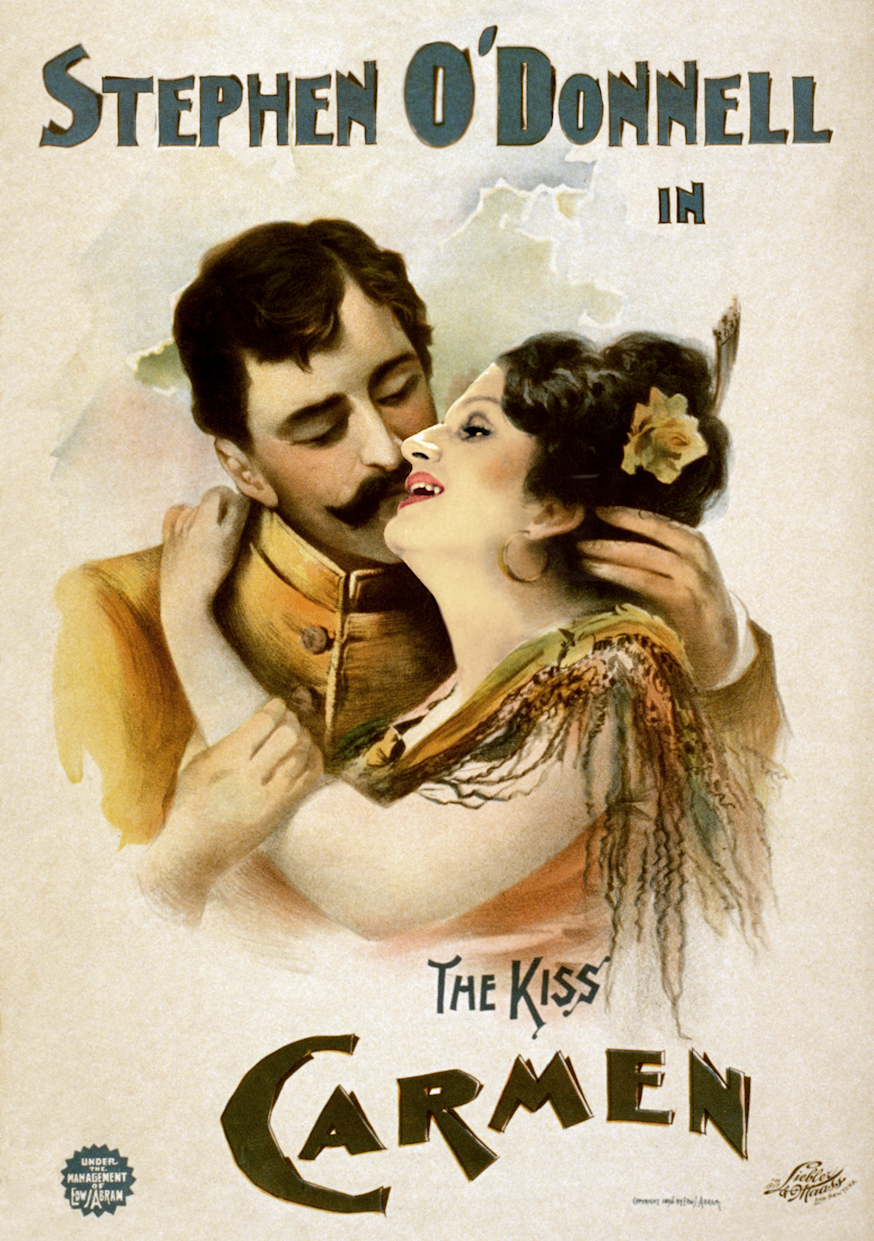 carmen at the portland opera


We had fantastic seats for The Portland Opera's dress rehearsal for Carmen at the Keller Auditorium. Front row, pretty much center in the first balcony. Perfect to get a wide view of the action and great for my date for the evening, a friend who's a musician, because we also had a great view into the orchestra pit. Waiting for the performance to start, we were talking his expertise: percussion, tympani, the exactness of rhythm. He told me of the importance of the tambourine. He gave me beautiful insights into, and way heightened my appreciation of the triangle. Seriously. When the show started my body plugged into the current of that rousing first overture and ran circuits directly to the gorgeous little ping of the triangle and the smash of the cymbals.

I'd never seen Carmen all the way through but after having supered in The Portland Opera's last production of Carmen, this show felt equal parts completely new to me and like an old friend. I knew the story inside and out and not at all. Not, at least, as a viewed-in-chronological-order thing. Seeing it this way, from the outside, all the way through, with those gorgeous sets and costumes and lighting, wow what a show.

Even though it was dress rehearsal, the singers were for the most part singing full out, and beautifully. I thought Sandra Piques Eddy's rich, hefty mezzo fit Carmen's role really well. All the singing was beautiful, particularly Chad Shelton's Don José - and the fabulous chorus whose voices filled the Keller up. It's a production all about bigness - all those voices, the lovely sets, the added touches like the flamenco dancers (who did a fabulous percussive turn during the changeover from act three to act four). There's also a whole lot of sexy in this production. Sandra Piques Eddy is very sexy as she taunts Don José, particularly in a moment when she's sprawled out on the steps of the factory, tied at the wrists, a prisoner who's nevertheless turning that rope into something extremely seductive.

Of course, my star of the show, or at least the performer I'd really come to see, was Stephen, who got to super in this production (his second Carmen) (jealous). When the solders came marching down the ramp from the top of the stage in their big hats and orange plumes, both my friend and I leaned forward in our seats, trying to spot which one was Stephen. He'd told me his was the only hat with a brass button on it, and yep, there he was: I could see that button flashing into the balcony.

But I would have had an absolute blast at Carmen had I not had a husband in the show. It's a huge, gorgeous, beautifully sung, beautifully played, beautifully staged production and of course one of the most accessible operas in the world to boot.

[Look! There's Stephen dead center in back, tallest of the picadors.]

There are two performances left: Thursday and Saturday. More info is here. If you go, look for a brass button and listen for the triangle.
Posted by Gigi Little at 1:07 PM 1 comment:


Submissions just opened for a short story collection I'll be editing for Forest Avenue Press. I'm so excited to dip in and see what stories come to us. Here's the description of the project from FAP's website:

Forest Avenue Press is open for its next short story project from February 1 to April 15, 2015. The collection, edited by Gigi Little and slated for a 2016 release, will celebrate Portland’s weird and wonderful spirit with tales of the fantastical.

The many-tentacled beast that lives under Burnside Bridge. The break in the space-time continuum hidden in the back corner of the Vacuum Cleaner Museum. Spacemen and sasquatches, mad scientists and devils. We’re looking for short stories that take the tropes and turn them on their ear. Smart stories that honor the fiendish whimsy of old pulp magazines like Weird Tales and Amazing Stories—but also surprise with their depth and complexity. All pieces must take place in Portland, Oregon, or be connected to the city in a meaningful way.

I grew up loving The Twilight Zone and lovely, campy old movies like The Village of the Damned. I loved the kooky melodrama of pulp magazines like Weird Tales and Amazing Stories. Not to mention the covers. Just look at these! 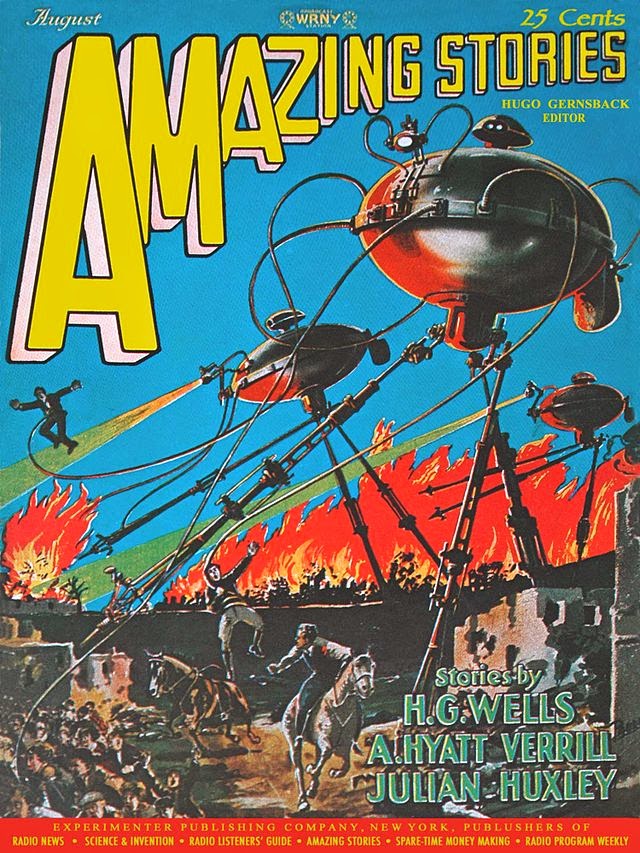 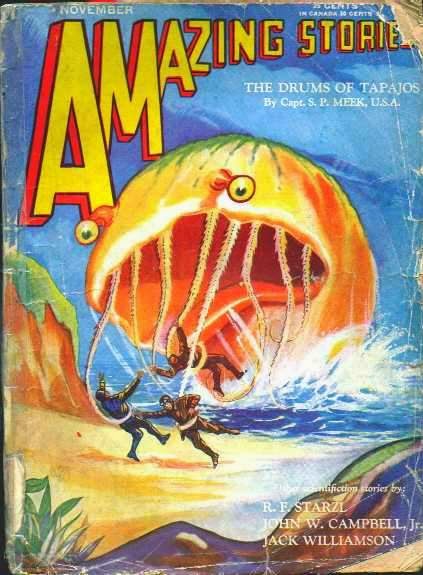 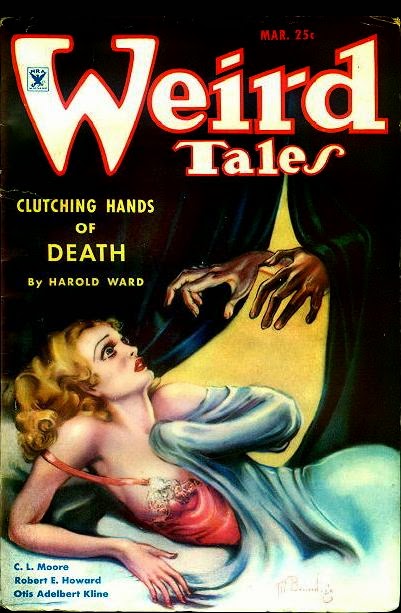 As I'm reading submissions I'll be looking for a grand mix - stories can be campy, serious, funny, dark. They can surprise me and break my heart. But I want all the stories to be weird and to be Portland and to hearken back to these wonderful pulp tales of the fantastical.

You don't have to be from Portland or live in Portland to submit. But you'll want to be able to really evoke the city I love in your story, and that means more than just mentioning the White Stag sign or Powell's City of Books. And don't be afraid to pick one specific locale. I'll be hoping to represent lots of different parts of the city in this collection.

I love good storytelling, but I also love language. I am not of the school of thought that the writing should hide in the background and let the storytelling do all the work. I love to be dazzled by a wonderful and particular voice. I love a voice that doesn't sound too written. I love burnt language. Also, don't think that because the collection will be paying homage to magazines like Weird Tales, you have to emulate the language and times of those stories.

And, of course, every editor has pet peeves. I thought it would be helpful if I listed a few of mine.

I don't like it when every attribution comes with a different synonym for said. I particularly don't like retorted, exclaimed, proclaimed, asserted, declared. What I do like? Said.


I don't like this sentence structure: she said, getting up from the chair. He yelled, shaking his fist. It's an example of the type of style that feels too written to me, sounds cliche to my ear. I know this type of sentence structure is in most of the writing out there, but it's one of the things that bugs me.

I don't like the vulgar names for body parts.

What else bugs me? If I think of more, I'll add them here.

I'll be reading blind, so I can't chat or email with anyone about their piece, but if you are interested in submitting and have questions, feel free to check in with publisher Laura Stanfill at:

Send us something! The submittable page is here!

Posted by Gigi Little at 9:22 AM No comments: