At the end of the mezzanine, waiting for the elevator with my cart of books, I reach and pull a book off. Open it. Careful. To where I was last when I was reading my copy at home.

I play clarinet with my friend Brody and we tap our feet three-quarter time our mouths around the instruments our fingers between the struggle of learning and the dance of music our knees our lives nearly touching."*

How many books on shelves have I sipped a bit of beauty from in my morning work? How many people have touched eyes on the very same words, the very same ink. What a particular and anonymous sharing.

[*from the chronology of water - lidia yuknavitch.]
Posted by Gigi Little at 1:03 PM 2 comments:

the last film i saw

A new episode of The Last Film I Saw podcast is here!

Stephen was the special guest this time, and he is obviously a much better on-the-spot speaker on the subject of film than I. Spoilers if you haven't yet seen Rome, Open City.

Plus, Brian Padian is hilarious.

Plus, I want to watch The Shining again.
Posted by Gigi Little at 5:55 AM 2 comments:

On impulse this morning, alone in Powells' big elevator with a few carts of books, I pulled one off and decided to open it at random and read out loud. This is what I read before the doors opened again:

"You might think, who is this, and I might say, this is God and what are you to do? Or I might say, a bird! Or I could tell you, madame, monsieur, sir, madam, how this name was given to me - I was christened Parrot because my hair was colored carrot, because my skin was burned to feathers, and when I tumbled down into the whaler, the coxswain yelled, Here's a parrot, captain. So, it seems you have your answer, but you don't."

That's Parrot and Olivier in America.
Posted by Gigi Little at 1:29 PM No comments:

Please stop getting in the way of my morning shelving duties at Powell's City of Books. If I can't stop standing by my book cart on the fourth floor workspace, reading The Chronology of Water, I won't ever get down to the Green Room to put your books where they belong, in the Upcoming Author Events display in the Green Room. I'm on the clock - I only wanted to take a peek at the opening line - usually this is safe - rarely do I get sucked in.

It is not good for me to drop tears on the merchandise.

Yours,
Gigi
Posted by Gigi Little at 8:58 AM No comments:

I practice my piece for Friday’s reading to benefit ILWU Local Five, the union that supports Powell's - while workers’ rights are being taken away across the country.

I work to promote my early June Olympia, Washington, reading in honor of the Pacific Northwest Reader — and take a look at the piece I'll be reading - about the tsunami warning off the Oregon Coast, including the flip line, “I didn’t get a tsunami for my birthday” — while Japan is embroiled in the aftermath of the earthquake and tsunami that killed thousands.

I walk to work and am almost surprised by the pink blossoms in trees, the tiny yellow daffodils. Such a strange spring.
Posted by Gigi Little at 12:02 PM No comments:

I keep thinking about all the people I met or crossed paths with in Japan.

The young guy who was working as... maybe an usher for the show? Who didn't speak much English but who said, whatever you'd like, just let me know. And who was taken up on this offer and drove us miles and miles one day, out to see a Japanese circus.

The woman who was our announcer, who went on field trips with all of us, who said "tastyfish" like it was one word.

The sort-of wheeler-dealer guy who popped in and out here and there in the tour - and who later, when we were back in America, found and made arrangements for a new pink trumpet when our first was stolen from our car at the border to Mexico. Who we picked up from the airport when he came to visit America and who wanted so much to see the Batman movie that we had to take him to see it right that night - and he slept through most of it. He lived in Kobe and survived the 1995 quake.

The young woman who came to our hotel room in Tokyo and sat on the bed with her Japanese-English dictionary to get help with translations and pointed to a word in a letter and said, "What mean... shit?"

The lines of school children looking at the exhibits when we visited the atomic bomb museum in Nagasaki.

The two men who worked at the hotel in Tokyo, who gave us quiet bows, nothing else, every morning as we left the hotel for the circus. But who were so excited after they saw the show one night that they invited us out to a karaoke bar. They knew about as much English as we knew Japanese and just kept ordering food and drinks and singing in the tiny bar. And laughing and laughing as the barmaid brought drinks to our table and told us to call her "Mama." The next morning on our way out to the circus, they were quiet bows, nothing else, again.

The family we got to know in one city, whose son was learning to play the trumpet and who invited a few of us to have dinner in their restaurant after the show's bandleader / trumpet player offered to give the boy a lesson. And who we invited to the circus as a thank you for the dinner. And who presented us with traditional Japanese candies as a thank you for the invitation to the circus. The gratitude back-and-forth went on all throughout the date - at one point including a trip to the place where the sumo wrestlers train, to watch a training session and meet the champion Akebono (we had a picture taken with him. the picture cut off akebono's head) - until, as the whole circus was loaded up in a big tour bus to leave for the next city, the family was running out to see us off, and to hand big bags of snacks to us through the bus windows.
Posted by Gigi Little at 6:29 AM 3 comments:

The forever ever onward of life. And how it never stops going faster.

Schedule two different readings in one night. Get to the first just in the nick of time. Step through the front door of the place and almost immediately onto the stage and into your reading. Flash of your words over the mic, then flash of applause at the end. Step back off the stage and stand at the corner of the bar to listen to ten minutes of story, then another ten minutes of story, other people's words, going by so fast you can't hold them. Say hi to friends who came to see you read, knowing you don't have the time to give anyone more than a quick hello or hug, then rush off for the second reading.

Raspberry Italian soda with ice in a glass. A moment to ground yourself before the second event starts. Try to read more slowly this time, OK? Intimate coffee shop, poets and folk music--still each moment is a flash, then gone, a flash, then gone.

Go to sleep too late, get up too early. E-mails to take care of, and look, pictures from the readings. Make breakfast but run out of time to eat it. Take it in a plastic container to have at work later.

No time for reading, stick the ear buds in your ear. Virginia Woolf and To the Lighthouse in your ears as you walk to work--try not to get distracted from her stream of consciousness by thoughts of all the things you have to get done at work today.

Try to slow it down a bit. Try to stop in the moment. Take the time to listen to the words in your ears and to notice, lying in the street, just past the curb, two potatoes.
Posted by Gigi Little at 4:53 PM 1 comment:

i'm my own double feature

Once in school, I had to make a speech in which I demonstrated a unique skill I had. At the time, my most unique skill was staring at objects and failing to move them with telekinetic mind power, so I decided to do my speech on calligraphy. I was so terrified that when the teacher called my name, I went up there and said that, before I could start, I had to write a few examples on the chalk board.

As I started drawing a fancy capital A, the teacher let the next kid step up for his turn. I realized somewhere in the middle of the letter C that no one was paying attention to me anymore. Kids came up to give their speeches and I just kept drawing letters. Slowly and carefully since calligraphy takes time to do right. By the time I got to Z, it was the end of class, and I got up there and said something about how the tip of the calligraphy pen is slanted, and the bell rang. It was the best speech I ever had to give in my life.

I think back then, had I heard that writers give readings, I would have given up my ambitions right there. Writing seemed lovely because, among other things, you got to have a voice without having to speak out loud. And here I am getting ready to do two readings in one night. With no chalk board. 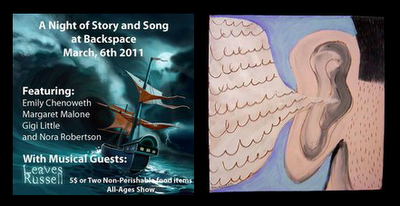 I'll be reading with Emily Chenoweth, Margaret Malone and Nora Robertson, along with writers from Portland State's writing community. Musical guests will be Leaves Russell.

With poets Anatoly Molotkov and John Sibley Williams, and folk musician Eric Mckuen. I'll be reading a number of short pieces, including one coming out soon in Thumbnail Magazine. The reading is split into two sets with an intermission. Since I'm reading before and after the break, can I call it three readings? That would be even cooler.
Posted by Gigi Little at 9:36 PM 1 comment: