a moment in the day: in the airplane

We're in middle seats waiting for takeoff. I try to remind myself not to be afraid of flying. I'm thirsty. I have to pee.

The plane is full. Why haven't they distanced the passengers? Why is no one wearing a mask?

Why are we not wearing masks?

I turn to Stephen: "We forgot our masks! We didn't bring one mask for this entire trip!"

The man sitting behind me is trying to get me to read his short stories, which are stashed in a box under my seat. The flight attendant drops by to accuse Stephen of forging the painting he had put in the overhead compartment. In the opposite aisle, another flight attendant helps a passenger by stowing his gun in a closet.

I get up to find the bathroom. The back of the plane is a rummage sale filled with items people are pawing over. White crockery. Scented candles. There are long lines waiting at the checkouts. People packed in. And in the corner, a bar. Everyone is having a lovely time.

I wake up in a panic. It was a dream. Sun runs across the quiet bedroom. But the panic doesn't really subside. That airplane. That is what being in America right now feels like.

Posted by Gigi Little at 9:31 AM No comments:

a moment in the day: cards

Ten o'clock and we're playing cards at the dining room table. The internet cut out in the middle of our show and we hadn't yet gotten enough diversion stuffed into our brains to shut them off for the night.

I won the first hand. Does that mean we'll win the election?

Stephen lost the first hand. Does that mean we'll lose the election?

The last time we played cards was the night of the big wind storm that was supposedly the biggest wind event in... what? Fifty years? One hundred? The power had gone out and we'd played cards by candlelight all evening long. Laughing and enjoying each other's company.

After that night and for the next ten days, Oregon and California were on fire.

The human brain loves to turn serendipity into metaphor, and metaphor into omen.

If the internet is still out tomorrow, we won't be able to access the election results as they slowly, excruciatingly slowly tick in. My stomach shoots another little fight-or-flight like it's been doing these last two days.

It's my turn. I count the cards in my hand to see how many I need to pick from the deck. Stephen's studying his. If all goes as it looks now, I may win this hand.

Posted by Gigi Little at 8:00 AM No comments:

I'd been nervous about starting work on the book cover art for Forest Avenue Press' next anthology Dispatches from Anarres: Tales from Portland Authors in Tribute to Ursula K. Le Guin. I'm always very invested in every book we put out, but with Dispatches it's even more so. It's a subject I love, edited by an editor/writer I hugely admire. There are stories in here by other writers I admire. Also, I'm always extra invested in the cover of an anthology because the book doesn't just belong to one writer; it belongs to multiple writers. I want everyone who has a story in it to love it. To compound all this, one of the people who has a story in this book is me.
Back when I was delighted to learn that my piece had been accepted, the publisher of the book had not yet been decided. Then suddenly it was Forest Avenue Press. Which meant I would be designing the cover too. Yay! Eek! Yay! I'd been ecstatic/freaked out ever since.
Then one day an idea came to me like a bolt from the blue. The blue being the shower, which is where a lot of ideas are born. At the moment the thought came to me, I hadn't even been actively mulling the book's cover. It was early to be getting started on that particular book, and I was busy working on a couple others. But it was sort of like the cover art was hiding inside the book title the whole time. Dispatches from Anarres. My mind suddenly flashed on some sort of otherworldly communication tower on another planet beaming stories out into the universe.
I jumped out of the shower to get the idea down. You'd think I'd draw out some simple sketch I could present, but my creative brain works in kind of a weird way. I write and draw with my left hand and I do graphic design (or anything with a computer mouse) with my right. I feel like my left hand knows how to turn line into picture but my right hand knows how to build. Design work, for me, is a lot about building. For this Dispatches idea, I didn't have an actual image in my mind—it was concept—and I wouldn't know what that would look like until I built it on the screen. So I got on Adobe Illustrator and, right hand on the mouse, started moving shapes around.
A communication tower going up into the sky... slanting up... I liked the idea of a slant... a perspective shot seen from the ground, looking into space, some planets hanging around, throw in some text... 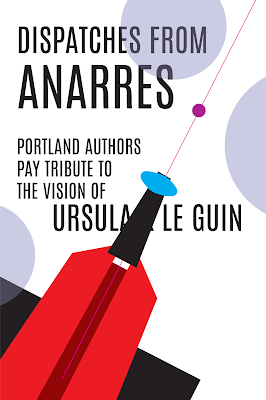 Yes, my early sketches are embarrassingly simplistic.
I knew this was definitely not going to be good enough to explain to publisher and author what was in my head. I needed to make the communication tower look more like a... thing. A real thing. So I started building it. Experimenting with what this tower might look like. 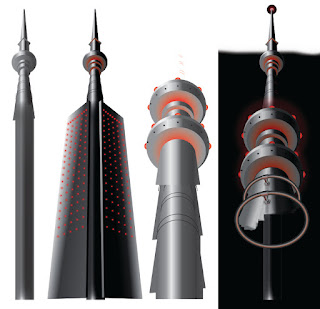 I got kind of obsessed. The more the communication tower became a thing, the more I felt like until all the elements of this cover looked pretty finished, it wouldn't be worth presenting. It would look cheesy and not give Laura Stanfill, the publisher, and Susan DeFreitas, the editor, the right immediate experience of what the cover idea wanted to be.
I'll admit, too, that tinkering with a shiny piece of sci-fi machinery and creating a spacescape was a wonderful distraction from all the myriad worries of our current dystopia. I needed a distraction so badly. I couldn't stop. I didn't stop until I had a tower I liked and stars and planets and a first pass at a text layout. I sent it to Laura and she had some thoughts about the text and I did a little tinkering and she sent it to Susan. 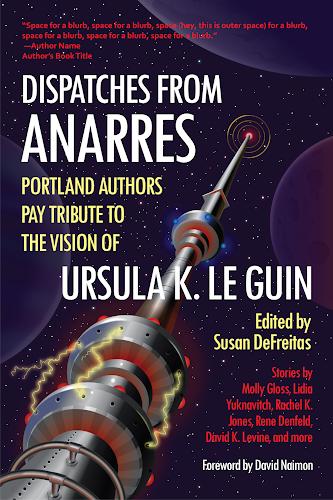 Susan had some great thoughts on where to take it from there. She reminded us that some of the stories in the collection take place on Earth (Oh yeah... including mine.) so she'd love for one of the planets in our spacescape to be Earth.
She also wanted a fantasy element added so that readers would know immediately that there are fantasy stories as well as science fiction. Her first suggestion was to weave in a fantasy map in some way. That got me super excited because what lover of fantastical fiction (or historical fiction, for that matter) doesn't love the map you see when you open the book before you even start reading.
.

I had the thought that the signal tower that nearly cuts the book cover into two halves could be the dividing line between sky and map. I pictured the Earth on one side and the circular compass rose of the map on the other, mirroring each other
I started with a crude-ish map and refined as I went. Working, I felt giddily like I was following in my brother's footsteps. He has a whole world he created, along with histories, king lists, words and words in languages he made up. And maps. Across years and years, he created beautiful, intricate maps. 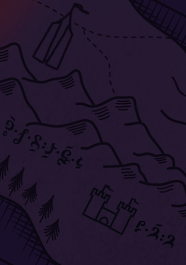 Mine was to be only a hint of a map against the sky once I turned it a bit, dropped it into the cover art, and gave it the right transparency. Too much detail would just disappear. So I stayed fairly simple, but as I refined, I changed out earlier crude suggestions of buildings for slightly more detailed castles and things.
I didn't want place names to be generic and I also didn't want them to point to one story over others. I thought, why does it need to be in English, anyway? So I made up a bit of alien tongue and put that in with my landmarks. 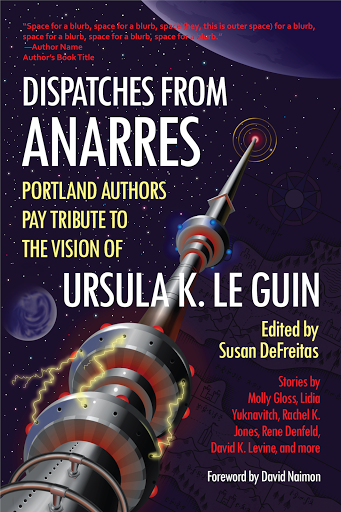 The map was a cool idea, but I worried that the end result looked a little busy. I sent it off for thoughts. Susan agreed about it being a bit busy and had another suggestion for getting fantasy in there: a dragon, or dragons plural, flying above. Ursula K. Le Guin, she reminded us, used dragons as a metaphor for the imagination. These could be simple silhouettes, dark shapes blotting out the stars.
"And I think," she said, "that might actually work in terms of a narrative impulse behind this cover as well, because the tower/ansible is clearly sending some urgent message out there to the stars—having the sky (subtly) infested with dragons seems like it might suggest what the trouble is…"
I loved that. And I loved that she used the word ansible in her comments. The word was coined by Ursula K. Le Guin in 1966 in her book Rocannon's World, as a device, "which can speak instantly to other worlds, with no loss of years." Though it was Le Guin's creation, which she used in different books through her career, the word made it into the greater science fiction lexicon and has been used by lots of writers since. Here's a webpage I found that gathered citations for the word ansible in the Oxford English Dictionary.
Anyway, I pulled the map out and went to work making some silhouette dragons. And as I was arranging them in the sky, I also added some more rings to my ansible's communication beams, fading out into space. There was a lot of back and forth with Laura and Susan over the text placement and then we finally had a final cover. 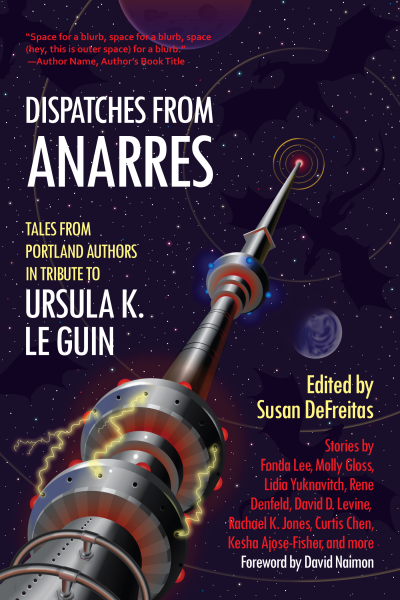 OK, this isn't a final-final cover. There's one detail that will be changing. You might notice the blurb in the upper left-hand corner is just a stand-in. We'll have to add that once review copies have gone out and blurbs have come in.
Dispatches from Anarres comes out in the fall of 2021. More information is here. And more information on editor Susan DeFreitas is here.
Here's just a taste of one of the stories, this one from "The Kingdom of the Belly" by Michelle Ruiz Keil.
*
The ghost cats live in the neighborhood where they died. Regressed to the we of the kitten pile, they nest in the roots of towering firs, soothed by the murmur passing through the fungal web that laces the urban forest.

When the moon is full, they speak as one, piercing the skin of the night to defy the coyotes, those fanged, merciless gods.

Spent, they wane with the moon. One or two drift off. No one knows where. Most just pretend at predatory things. Airborne, they chase birds whose blood once filled their mouths with pleasure. These cats know they’re foolish. The birds don’t even see them. Pleasure is for the living.
Posted by Gigi Little at 7:41 AM 2 comments: