Sometimes when you think you're done, you've only just begun. Recently we released the cover art for Julia Stoops' upcoming novel Parts per Million. Then we went back to the drawing board and came up with a completely new one. 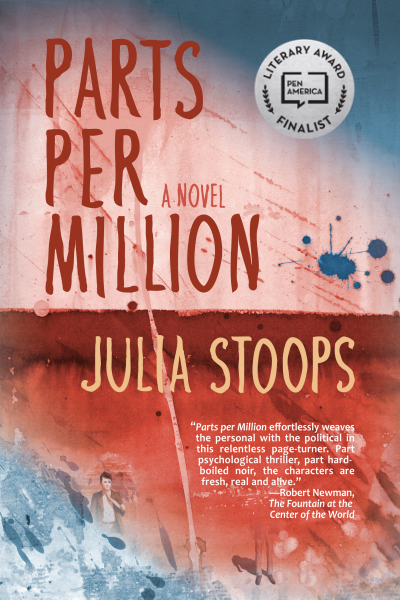 The new design features writer Julia Stoops' art. She gave me two different pieces to choose from, in full color and various monochrome versions, and in the end I combined the two pieces. Featured in the art is Nelson, the main protagonist in the book. It was fun to play around with Julia's art. I'm a huge fan. You can see more of it here.

Publisher Laura Stanfill wrote about that process on the Forest Avenue Press website here.
Posted by Gigi Little at 9:45 AM No comments:

on her birthday: early journal entries about my sister edina, with spelling errors intact and my own commentary in blue


1978
May 18—Edina fell over on the bed on a chair. The table on dad's side fell. I scremed once and in the night dad tirned on the Light it exploded from edina put clay on the bulb.

1979
July 26—Today I went skiing. Someone called us. Heather and Edina played in the row boat on the way our gass started to leak then it started to rain. I got under the steering wheel. CoCo pulled us to shore. I helped the Lady in the other boat to find CoCo's car keys to get something. I thank God for that adventure. In the summers we visited our grandparents at their house on a lake in Virginia.

1981
April 16—We practiced our play for Edina. She came home early and we screamed. it was with our guys. We used my Backy (Blanket). We sold things cheep The we here was my cousin Heather and me. Our guys was what we used to call our stuffed animals.

September 29—Edina's birthday is tomorrow. She's getting a bird he's a pretty bird.

August 14—We are at Noni & Coco's house. Edina skis better than any one exept Freddy. Aunt Sally, Uncle Alex & Nana was here. We sang and played piano before going to bed. It was so much fun!

August 15—We skied & fished. Edina makes me so mad! She is bragging & she got mad at me for suggesting for she & I swiching drowers & I got in trouble for it!

October 2—We saw E.T. 6th time for Edina's birthday. I didn't cry as much. They had the sound on sterio. Edina had an E.T. cake. I got a piece with E.T.'s eye. Mom gave everyone an E.T. poster. I used to judge how much I loved my favorite movie E.T. by how much I cried each time I saw it.

December 11—We went shopping at the mall. Secretly Heather Edina & I went & got olde fassioned pictures taken. One for Mom & dad from all of us & one for Kathy & Mike. Then mom Found out & had us do it again with Frankie for some people. We got to dress up & pose. We didn't smile the 1st time but 2nd time Mom wanted us to. It was so much fun!!!

1983
March 8—Edina got special (Ladybug). I got 3 Cs on my progress report. I sang about being cool. Edina started me off. I'm reading "Skeleton Island." Mom put us on a no sugar diet. Ladybug was one of the favorite video games we played at the time.

May 20—Because of parent-teacher conferences, we had no school today. Edina's friend Jenny came over. I started to clean out my drawers. I worked at Mom's "French Pantry. It was slow. When we got home, Dad, Edina and I swam. We took turns pulling each other by the feat. It was fun. It felt quiet and relaxing. We pulled each other softly around. It was fun!

1984
Feb 7 brought news that Mom is finaly going to sell the restaurant. On the weekend, Edina & I went to the Ocean side house by train with Heather. We exchanged and looked at each other's star scrapbooks

(Nov 2 6:41 AM) I dreamed I died and had to be taken to a place where I'd make the transition from this life to something else. Mom said she would help me get through the transition and the hardest part which she called something like "the forest". She said she'd come with me. I was wandering about, looking for pictures of Edina and Frankie. Somehow, I knew I'd see them soon. It's funny because before I went to bed last night I was thinking how beautiful life is.

1985
3/6/85 (9:38) P.M I bought some earings from Edina—2 pair for 5:00, She & Tina are now in the earring business. But, I won't knock it. They've got a good little business going. Tina provided all the old jewelry and they made them into earrings. It's great. The best gaudy bead and rhinestone earrings around.

March 17—Edina dreamed, last night, that she was on an island with me, and a guy who looked like Julian Lennon. And, he and I went to see what was at the other side, and some man pushed Edina into the water & began to choke her, but she got away. And, we came back & told her we found some land at the other side. He kicked in a door to some room or something, and there was the man who tried to choke Edina. Julian Lennon fell in the water, or something, and I jumped in after him. And, then, there were sharks in the water with us, and Edina came in after us & knocked the sharks' teeth out.

Well, I dreamed we (Edina, Heather & I) were going to be made into worms.

Good Friday 8:07 A.M.—I’m in Edina’s room with her, listening to We are the World. She just taped it off of the radio. This is now the #1 song. And, all the money is going to Ethiopia.

I went downstairs this morning & Mom said the radio stations all over the world are going to play it 10 minutes ‘til 8:00. I rushed upstairs and switched on KRTH really loud. Edina put on KIIS really loud. I then dashed into Chandler’s room and put on KRTH on the 2 radios in his room. We switched on M.T.V. upstairs and Mom switched M.T.V. on downstairs. I then opened my balcony and Edina’s and Frankie’s window. The song came on. It was alittle off from station to another, but that didn’t matter. We turned up the radios as far as they would go. It was great. Dad came in my room and told me to change the station around. Almost every station was playing it. There were approximately 80,000. They were even playing it on Muzak stations—in supermarkets and elevators!

We’re now in my room, and I’m taping it for Edina and for myself—the exact copy when it was played all over the world.

One things for sure. It’s true we’ll make a brighter day—just you and me.

a moment in the day: bill


Saturday morning, and just about time for Stephen to leave for work. I come down the stairs to say goodbye, quick footsteps of Nicholas on the steps behind me. We come into the dining room. Just around the corner in the little den-slash-clothing room, where our bureau is and our clothing racks since there are, as of yet, no closets in this house, Stephen is singing.


I used to dream that I would discover
The perfect lover someday.
I knew I'd recognize him if ever
He came 'round my way.

I wait in the dining room as he dresses and sings, not wanting to disturb. His lovely, clear voice. Singing to himself, quiet, in a way that seems to tell me he's actively enjoying the simplicity of the song.

I always used to fancy then
He'd be one of the god-like kind of men
With a giant brain and a noble head
Like the heroes bold
In the books I've read.

It occurs to me after listening for some time that this isn't the kind of song most husbands of women sing.

Odd, I guess, that I never find it odd: the love songs he sings about men, the dresses he paints himself in, the blog posts he constructs of paintings and old pictures of sexy male figures.

Odd, I guess, that our normal is something I don't find at all odd anymore.

Nicholas stares at me to tell me he wants me to pet him, so I do.

Oh, I can't explain,
It's surely not his brain
That makes me thrill -
I love him because he's - I don't know...
Because he's just my Bill.

Stephen steps out of the den to find me sitting cross-legged on the floor, with Nicholas, a surprise audience. Noticing me, he jumps and punctuates the end of the song with the bang of his feet on the dining room floor.

He laughs. I laugh.

He leaves for work.

A year ago in City of Weird's life


Those little memory posts that pop up in your Facebook feed. Here was the picture that showed up in mine today, reminding me that a year ago today finished copies arrived at Forest Avenue Press for the first time. 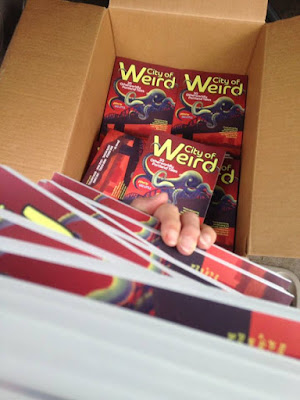 They did not hit stores yet that day, and the official launch date was October 11th, but what a thrill to see those books alive and in the world.

My comment along with the posting of the picture was:

Held one of these for the first time, today. I'm not sure quite what to do with myself.
Posted by Gigi Little at 12:07 PM No comments: