a moment in the day: picture


How to take an adorable picture of your adorable dog doing an adorable thing on Christmas morning.

Step 1. Take Nicholas out for a walk.

Step 2. Oh my god, look at that adorable tiny reindeer stuck in the grass at the edge of the lawn at a neighbor's house!

Step 3. Oh my god, look at Nicholas standing next to the adorable tiny reindeer, I really need a picture of this!

Step 4. Take phone out from inner pocket of sweater.

Step 6. Pass-code lock screen, yeah, this is never going to work, Nicholas is going to walk away and ruin everything.

Step 9. You're on the wrong screen, quick, swipe left.

Step 10. Oh my god, Nicholas is nose to nose with the adorable tiny reindeer!

Step 12. Nicholas is walking away.

Bonus photo. Also seen on walk, but it couldn't walk away. Sad, discarded Christmas boughs left at the curb on Christmas morning. 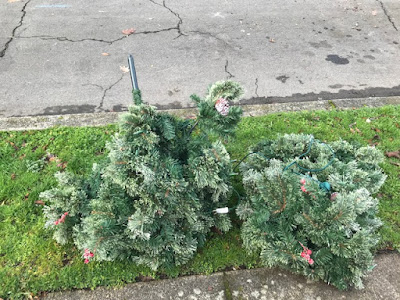 A Christmas Memory and Winter Song at Portland Center Stage


I'm at the place in my life where time goes so fast that December 9th is two days before Christmas and next week it will be spring. I'm trying to hold onto the holidays hard, taking in all the lights, watching holiday movies. I'm printing holiday cards as we speak. Friday night Stephen and I went one better and saw A Christmas Memory and Winter Song at Portland Center Stage. 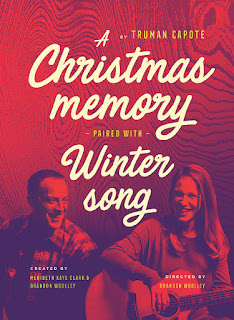 Two plays in one, downstairs in the lovely intimacy of the Ellyn Bye Studio. Winter Song is a series of holiday musings and songs tied together with some audience participation. I started to sense the coming audience participation before the show began when I saw the actors going out into the seats and talking to people. Instant panic. Stephen and I were in the second row, dead center, sitting ducks. Stephen, eyes in his program, murmured that maybe if he read really hard, they wouldn't come over to us.

But thank the ghost of Jacob Marley, it turned out to be the best kind of audience participation you can have. The players were just asking people their holiday memories and writing them down, to incorporate into the show. This introvert very much appreciates being able to participate and not participate at the same time.

It was really interesting to watch the way they incorporated those thoughts into the show. Takes some skill to bring that all together in a way that flows and hits the right emotions at the right time. And the music weaves in and out, with covers such as Simon and Garfunkel's Homeword Bound and Laura Nyro's Mother's Spiritual - some original music as well. The storytellers/singers are Merideth Kaye Clark and Leif Norby, and they're accompanied on piano (and occasional vocals) by Mont Chris Hubbard, who also directs.


Merideth Kaye Clark has a strong, lovely voice and plays many instruments, some of which she brought in to accompany the music. Merideth and Leif perform and sing well together, and when all three voices get going, it's really beautiful.


But for me, the gem of the evening was Leif Norby's lovely interpretation of Truman Capote's short story "A Christmas Memory." I'd never read this, although many people I know incorporate a reading of it into their holiday tradition. My own holiday tradition includes the gorgeous Dylan Thomas story "A Child's Christmas in Wales," and I anticipated the Capote story being something akin to that, a warm holiday memory you'd want to read (or see/hear) year after year.

It so is. The story of a seven year old and his elderly cousin in 1930s rural Alabama making fruitcakes to send to, among other people, President Roosevelt is warm and poignant and quiet and beautiful. It's a small story that goes to the heart of friendship, generosity in the face of poverty, richness of spirit, and loss. Yes, loss, and it did make me cry, but mostly the story is joyful and you leave just being in love with seven-year-old Buddy, his unnamed cousin (who he refers to as "my friend") and their little dog Queenie. Three days later (as of this writing), thinking about the details of "A Christmas Memory," little things like how Buddy refers to her as "my friend" make me want to cry again.

Leif Norby is wonderful as the elder Capote looking back on his childhood in this autobiographical tale. He has that magical way of presenting simultaneously as a man of, oh, I don't know, fifty, and a boy of seven, with no preciousness at all, and when he voices the dialogue of the elderly female cousin, he is she: sweet, funny, and real.

"A Christmas Memory" is definitely something I could work into my own holiday tradition, and I could come back to Portland Center Stage and watch it every year. It's a lovely place to stop for a moment in the constant onrush of time. This year, it's playing through December 30th at Portland Center Stage at the Armory. More information is here.

Photos are by Patrick Weishampel/blankeye, courtesy of Portland Center Stage at The Armory.

Posted by Gigi Little at 5:49 AM No comments:

books in the world


One of the benefits of social media for me is that I get to witness the life of my books in the world.

Oh, did I say my books? I mean the authors' and publishers' books, but because of the intimate relationship I have with a book whenever I'm concepting and designing a cover, they all feel like my books too.

Recently, I've been having fun watching a handful of new and emerging books make their way in the world and so I wanted to gather and show (off) a few.

The Alehouse at the End of the World by Stevan Allred (Forest Avenue Press)
Here are Stevan and author Kate Carroll de Gutes at Broadway Books in Portland for Indies First day. Kate is holding Stevan's book and Stevan is holding Kate's Objects in Mirror are Closer Than They Appear. I don't know which coupling I like better in this picture, the authors, the books, or the ties. 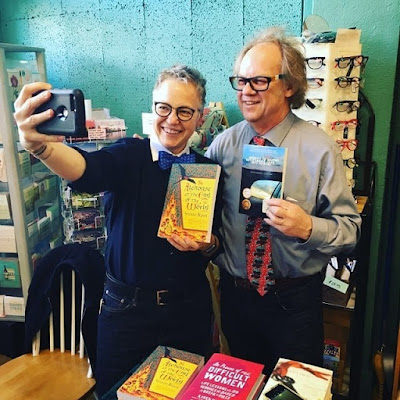 The Place You're Supposed to Laugh by Jenn Stroud Rossmann (7.13 Books)
In the middle of a busy book tour, Jenn drops off a copy of her book at a Little Free Library. Stealthy! 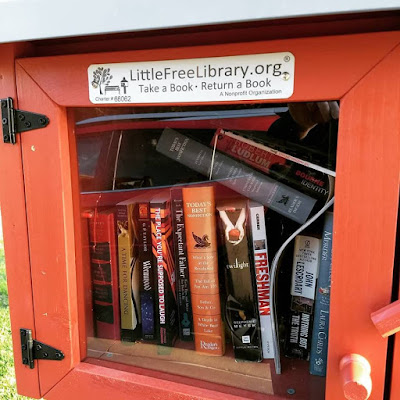 This Never Happened by Liz Scott (University of Hell Press)
This is Liz' selfie on the day she saw and held her book for the first time. She's actually the baby on the cover. 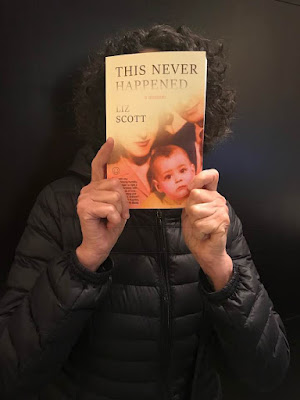 And a shot of the book out in the wider world. Though the book doesn't officially pub until next spring, pre-orders are available, and if you pre-order, U Hell will send your book out early. This is in the hand of Jackie Shannon Hollis, the author whose memoir This Particular Happiness (Forest Avenue Press) I'm working on now. 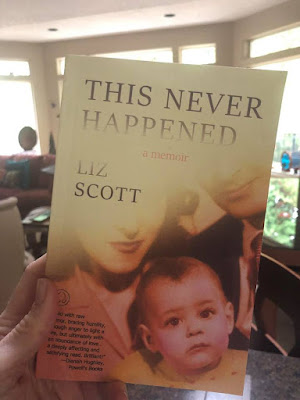 The Untold Gaze with art by Stephen O'Donnell and stories by many, many lovely authors
OK, I'm kind of cheating, here, because this isn't showing a book cover at all, but I worked on the interior design as well. This is on display in the Blue Room at Powell's City of Books. It's fun to see what page they have it open to on any given day. Here it's open to the story "Coast Starlight 11, Halloween" by Kevin Meyer. 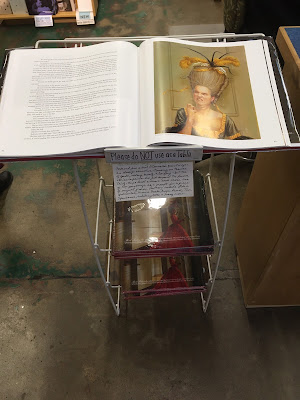 Besotted by Melissa Duclos (7.13 Books)
Besotted is due out next year. Here is Melissa holding the ARC (advance reading copy) of her book for the first time. 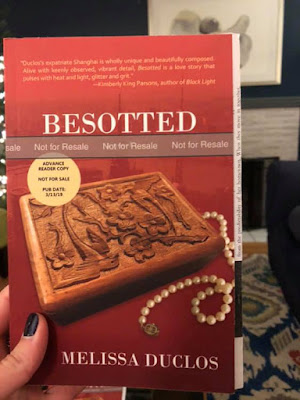 And here's what she feels about that. 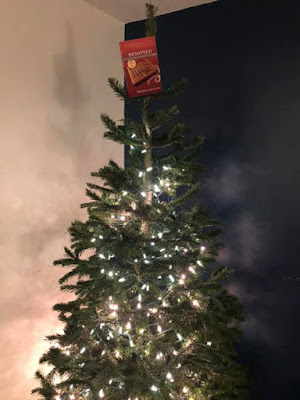 Here are some links if you want to find out more about these lovely books.

The Place You're Supposed to Laugh (Jenn's website includes a sweet homemade cover design by her daughter, too.)

Posted by Gigi Little at 9:05 AM No comments: