It's been a while since I've been to the theater. Sitting in the seats at the main stage at the Gerding on 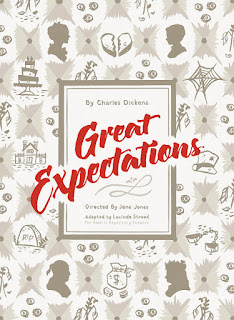 Friday night, watching a play that was adapted from a book I've both read and listened to on audiobook and whose film adaptations I've seen, I was reminded just why I love theater. There's nothing quite like that particular magic. The way a grown actor can so beautifully and believably play the role of a child. The way one basic theater set with some moving pieces can so fully harbor the many different settings of a complex story line.

Portland Center Stage's production of Great Expectations is full of that stuff. And one of the most effective bits of that magic is in its adaptation (by Lucinda Stroud for Seattle's Book-It Repertory Theatre). Stroud folds passages from the book right into the dialogue so that characters might be speaking to each other in one moment and then reciting part of the narrative in the next. It's very skillfully done, adding momentum to the scenes and giving the gift of Dickens' voice to the action.

Some other favorite bits of magic: The way we're introduced to the cemetery as Pip and Magwitch gaze at the graves of Pip's family (I'll just say that much so as not to give it away, but it's a lovely, clever theater moment). The slow, subtle shift of Stephen Stocking's Pip from boy to young man to man. The chameleonlike work of the actors playing more than one part - particularly Dana Green's Mrs. Joe and Miss Havisham, two very different characters, each played beautifully.


I'll say I wanted a little more out of Miss Havisham's cake. Granted, no depiction I've ever seen, on stage or in film, has ever matched the cobweb-draped, spider-infested mountain of rot and regret that I created in my head when I read the book. What is spectacular, though, is the set. It's all wood and shadow, bleak, framed by two staircases and a connecting footbridge that amplify the power dynamics, both real and imagined, throughout the story.


And most spectacular of all is the gigantic clock that presides over everything. It's a lovely fiendish reference to Miss Havisham's many clocks, all stopped forever at twenty till nine, the moment when, years ago, her heart and her own best expectations were broken. Time may have stopped for Miss Havisham, but the enormous clock face, cloaked in cobwebs, rotating slowly, is, rather, a looming reminder of the endless forward movement of time, of the inevitability of change, and of our relentless march toward death.

In other words, the show's a delightful romp. Actually, I'm serious. This production is definitely dark, but it's also deceptively light and often funny. Packing the 500-plus-page story expertly into three hours that are so entertaining you'll be surprised to learn that three hours have gone by, PCS' Great Expectations is delightfully Dickens and magically theater.

It continues through February 14th. More information is here. Thanks to Patrick Weishampel for the photos.
Posted by Gigi Little at 6:55 AM 4 comments: