Not long ago a friend posed the question on Facebook, do you have a bucket list and what's on it. And I realized I have a book cover bucket list. By the time I die, I'd like to have had the chance to make covers for all the different kinds of books there are in the world. Well, that may be a little unrealistic. How about: as close to that as possible.

So I was very excited when, not long after, I was contacted to do a cover for a genre of book I'd never done before: a romance.

Sparks by Maren Anderson was first nutshelled to me as "a rural romance with a healthy splash of magic." Here's how we describe it on the back cover of the book:

Rosie wants to tear down the ancient cowshed on her ranch to make room for more horses, but it is unlucky to knock down a barn. Rosie thinks this is superstitious hogwash. That’s why she and her very cute new boarder, Patrick, get drunk one night and knock the shed down with the tractor, unleashing something very dark and very angry.

It was that something dark and angry that Maren was interested in capturing for the cover of the book. She shared this passage with me:

One picture stopped her. It was old and crude, but unmistakable. There was a barn. There was a man whipping a cow. There was a monster crawling out from under the barn, claws extended, heading for the man from behind.

A shiver danced down Rosie's back.

The caption beneath the picture stopped swimming and resolved itself into a word she recognized.

Maren asked if I could recreate, in imagery, the woodcut she'd created in words. I loved that challenge. I immersed myself in historical images of woodcuts and came up with this. I presented it as both a simple image that we could add color to (not to mention title, author, that kind of thing) and, mostly for fun, as a pure woodcut, on old paper, the ink worn with age. 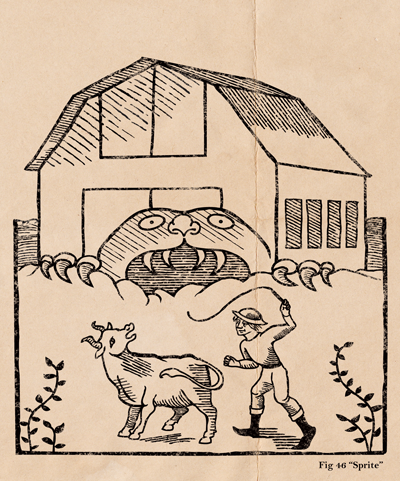 I LOVE THIS. You gave me exactly what I asked for. I want a big print to hang in my office.

Sometimes you need to see what you want, to know... you don't want it.

Seeing her idea come to life made her realize she needed something different. We'd been playing with the "healthy splash of magic" part and not the "rural romance" part of the novel. She wrote:

It needs horses and pastels and romance on the cover. (But not six-packs and headless female torsos. You know what I'm talking about. I hate that.)

Which, as an aside, brought me back to my bucket list. I'd illustrated monsters before. But not romance and, come to think of it, not horses.

One other element Maren put out to me was filigree. She said what about a close-up image of a horse head but with the woodcut "sprite" worked into a filigree around it. My initial thought was, no, that won't work, because the woodcut sprite is chunky, crude, and filigree wants to be delicate. But then the challenge of making it work took over.

I played with various horses and horse heads, different types of filigree, I tried to work in various couples, to put romance front and center, but in the end, the direction Maren and her publisher, Ben of Not a Pipe Publishing, chose contained an extreme closeup of a horse face with the romance showing, not in, say, an illustration of two people embracing or holding hands, but a tiny heart worked into the shine of the eye. 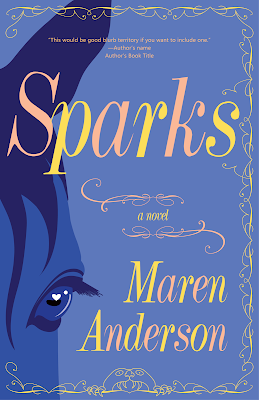 They wanted to try various color schemes and to keep the text all one color, so I gave them a bunch of variations... 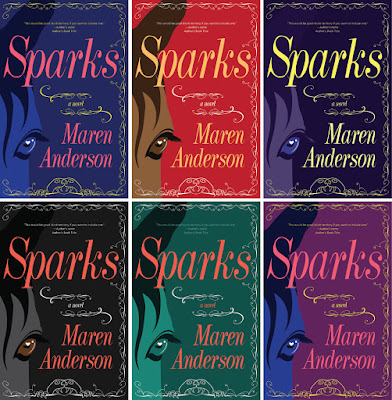 In the end, this is what they chose. 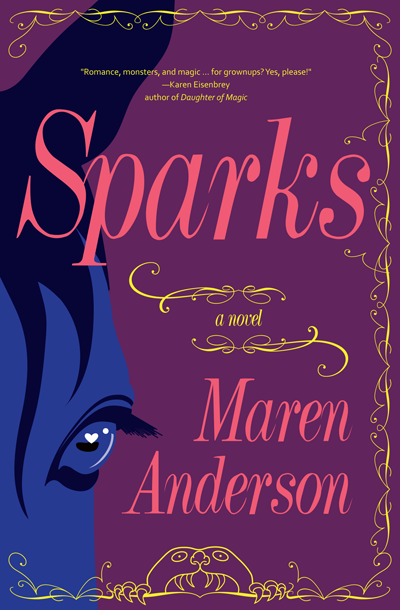 You can preorder the book here. Info about publisher Not a Pipe Publishing is here.

Patrick was due “first thing in the morning,” in his words. When he pulled up in a white pickup, Rosie — already done with morning chores — was sitting on her porch with Bobby, her hands wrapped around a mug of coffee, enjoying the warm steam as much as the hot drink. He hopped out, smiling, and strode over to her, hand extended. “Hiya! I’m Patrick!”

Rosie stood and shook his hand. “Hi, yourself,” she said. Then she handed him the other mug of coffee steaming beside her and sat down again.

He stood a moment with the mug and then sat one step below her. He rubbed Bobby, and the dog nearly died in ecstasy. Patrick took a sip. “Nice place you’ve got here.”

Rosie smiled into her drink. “Thanks.”

Patrick didn’t seem to know what to do next, so he fondled her dog. “What’s your name, buddy?”

“Bobby’s a handsome boy.” Patrick smiled at Bobby and scrubbed him at the base of his tail.

Bobby groaned, and his tongue lolled out and hung to his knees.

“You found his favorite spot,” Rosie said. “It looks like you’ve got the magic touch.”

She stood and stretched a little. “I assume you want a tour?”

Rosie strode off the porch toward the horse barn, mug in hand. Patrick, Bobby close at his heels, followed, but when they passed the falling-down shed, he stopped and blinked.

“You don’t keep animals in there, do you?” he asked.

“Not on your life,” Rosie said. She stood next to him as they regarded the shed together. She noticed that they were nearly the same height, she five four, he maybe five six. His haircut made her suspicious of a military background, but it wasn’t so short that she couldn’t see that he had been blond as a child. She decided there was something both old and decidedly young about him.

He looked at her, and his gray eyes smiled. “What kind of ghosties live in there?” he asked.

Rosie smiled back. “I don’t know. I’ve been trying to bring myself to tear it down for a while. I need the space for a round pen. Something always comes up, though.” She let her gaze return to the shed. Today it looked as though it were trying to push the oak tree out of its way. She shrugged and turned.

Patrick, with Bobby trotting at his heels, followed her to the twenty-stall barn slash indoor arena that had been Rosie and Ben’s pride and joy. It had taken them years to scrape enough together to buy the materials for the barn, and then it had taken months and every favor from every friend they ever had to put it up. The ordeal never seemed like work, though, Rosie told herself.


“Come into my office,” Rosie said. He followed her into the tack room. On the back wall, nearly hidden among a wall of English and Western saddles, Rosie pushed open a door and went into her office. It was a weird setup, but she kind of liked the hidden nature of the room. It felt like a little safe, hidey-hole.

She had turned on the electric space heater before she had started chores, so it was toasty warm inside. She re-filled her mug of coffee from the coffee maker and topped off Patrick’s, too. Patrick sat in the chair in front of her desk, and Rosie noticed that Bobby ignored both the ratty sofa and his soft dog bed in front of the heater, instead flopping at Patrick's feet. Patrick smiled and rubbed the dog's back with his toe.

Rosie sat behind her desk and forced herself to smile warmly at the handsome novice on the other side of her desk.

“Now, what exactly do you think I can do for you?”

“Well, I bought this horse,” he began.

Patrick shifted a little in his seat. “I was thinking about buying a horse for a while, you know, since I’ve been back, in fact, so I went to an auction.”

Rosie cursed in her head. An auction horse? “And?”

“And there was this guy in the parking lot.”

“I know I shouldn’t have bought her on the spot, but she is so beautiful, and we have a real connection.”

“Did you at least ride her first?” Rosie asked, fingers crossed.

“No. I’m too new. I wouldn’t know from straight up. But I watched him ride her. She seemed sound.”

“My Aunt Nan lives outside of town on an acre.”

“And the only shelter is a tree?”

Rosie picked up her long braid and began plaiting the loose hairs on the other side of the rubber band. Finally, she sighed. “Okay. You have a horse. Now what can I do for you?”

“And I’d like full board, lessons for me, and training for her.”

Rosie chewed on her lip.

“What’s the problem?” Patrick said. The brightness was gone. “I can pay you for your services.”

“That’s not it,” Rosie said. “I am happy to take your money. I am happy to give you lessons and train your horse, but I need one condition from you.”

“You have to promise me that you’ll sell the horse if I tell you that she’s going to kill you.”

“The only way that I’ll take you on is if you will trust me enough to sell the horse if I tell you that she’s too wild and is going to kill you. If you don’t promise, or don’t sell the horse, I’ll evict the both of you.”

They regarded each other a moment before Patrick nodded and said, “Yes, Ma’am,” without a hint of sarcasm.

That was the first time Rosie thought that they might be able to work together.

Bobby interrupted the moment by thrusting his head under Patrick’s hand. He laughed and rubbed the happy dog’s ears. Rosie sat back with her mug and smiled.

“You’re one of the chosen,” she said. “Bobby is wary of new people.”

“Oh, I have a way with animals,” Patrick said. “Always have.”

Rosie watched him rub Bobby into a drooling coma, and she didn’t doubt it. It reminded her of other men and different dogs. She swallowed the lump in her throat and said the first thing that flew into her head.

“Where did you come back from?”

“Huh? Oh, Iraq. The first one and the second.” He was scratching Bobby’s chest and the dog was orgasmic, but Patrick was perceptively more tense. “Retired Army. As a civilian I’m working as an analyst at HP in Corvallis.” He sighed, then half-smiled which made his eyes crinkle. “I’m looking to forget the Middle East, you know?”

As Patrick signed the boarding agreement, Rosie wondered where the idiot who had bought a horse in a parking lot had gone. Who was this man? Patrick was suddenly interesting.