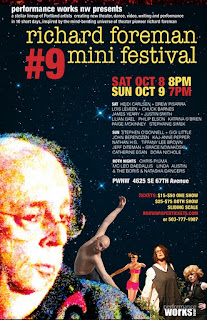 The Richard Foreman Mini Festival is less than a week away, now. We're in the middle of preparations. The prompt from Richard Foreman's notebooks came to us at twelve-o-one in the morning on Thursday. We printed the pages and went through the lines from his play script and chose a couple to incorporate into the piece we were to write. On Saturday night we got together with our cyber-maestro Sage Ricci to finalize our backup music, and on Sunday we wrote the piece.

Today, Monday, we were given our second prompt, which came to us from the performers who will be on stage before us. They were to choose a bit of language, a bit of dance, a prop... something from their own piece and pass it on to us, and we were to incorporate it into our piece. We, in turn, had to choose a bit from ours to pass on. Today also was a two-hour rehearsal period at the little theater. There are other preparations we're involved in, but I don't want to give away what we're doing - all I guess I want to give away right now is the quick forward momentum of this whole process. So interesting. Ten days between getting the prompt and performing in the show. Today, we performed to an empty house and a cat sitting on a chair. He listened to about half a song and then he was gone.
Posted by Gigi Little at 8:56 PM