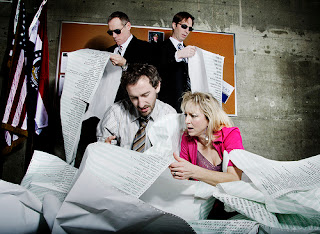 So, there was a moment somewhere in the middle of The North Plan where I laughed that kind of laugh that shoots out of your mouth and echoes over the heads of the people in front of you and you miss the next couple lines because you're thinking about how embarrassed your husband is.

I want to admit that as we were sitting in the theater waiting for the show to start, as I was reading the Director's Notes in the program*, and Rose Riordan wrote that, "the unleashing of the character Tanya Shepke will go down in PCS history," I thought, oh no. I thought,  this is going to be some overdrawn, overacted, overblown caricature who everyone's going to think is hilarious and who's going to get on my nerves. Nothing against Rose Riordan; anytime a character is lauded like that, I get ready to be annoyed. But she was thoroughly enjoyable. Total off the wall ADD motormouth, shooting f bombs with perfect timing. When she was hilarious right away, I thought, OK, when's this going to wear thin, and it didn't wear thin.

Kate Eastwood Norris as Tanya Shepke. So good. [you can't see it, but perfect costume too.] [oh, i just realized she's flipping off the camera in this picture...] 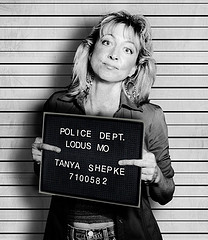 I laughed through the whole show. All the characters were funny in their own way, all had this great mix of ridiculous and real. The writing was so smart, and the actors each were so good, there was such - again - pitch perfect timing. One of my favorite moments was a great deadpan back and forth between Tim True [always love him in PCS productions] and Ashley Everage in which he said ___ and she said ___ - oh, heck, I hate spoilers. Just go watch it. The play is a modern screwball comedy about conspiracy theories and renegade government, and going into it, I worried that I'd get lost in the plot-line, that I'd have to remember and interpret all sorts of complex and convoluted twists. When the pace of the show seemed so fast right off the bat, I again worried that I'd get lost in things. But in the end, it's a simple plot and the candy in this particular show is its craft. The thing you're sitting there devouring and loving is the craft of the writing, the craft of the acting, the craft of direction.

Brian Patrick Monahan as Carlton Berg. Just enough edge of panic in his portrayal that you were reminded that, as the conspiracy theory guy, he might be crazy. [who set up these pictures? i love how his eye is looking at the camera.] 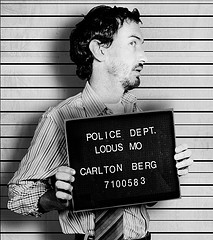 At intermission, I told Stephen that now was the time you had to worry if the show was going to jump the shark. All the set up was smart and hilarious, but as the plot started gathering steam and winding toward its conclusion, it might start to strain and become the wrong kind of ridiculous. There was a moment just as the second half started, when Tanya entered the scene, where a few lines were an expected kind of funny, but then it took off again, and new particular, funny characters were introduced, and things were different enough to be fresh.

If I had to take issue with anything in the play, I could take issue with the ending - it was definitely audacious but was it right or wrong for ___ to ___ and then for ___to  ___? I wasn't completely sure. Stephen and I left questioning and discussing, and in the end, isn't that what you want to do as you're leaving the theater? I'd love to hear what others think of the ending, and I'd highly recommend the show. It's at Portland Center Stage through February 5.


*Can I mention that I love the PCS always includes a couple features in their program - the Director's Notes and at least one background article about the show? When I go to plays at other theaters and don't get this extra stuff in the program, I'm always disappointed.
Posted by Gigi Little at 7:09 AM