spotlight on songstory: interview with cymbalman

Today's spotlight is an interview with Cymbalman who will be performing and offering himself up to be played at SongStory on March 7th... 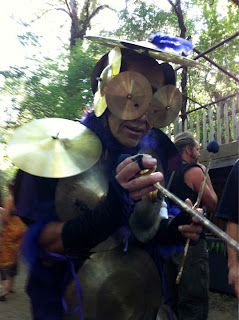 ME: What gave you the idea of creating a character made of cymbals who is played by the audience?

CYMBALMAN: The idea came kind of organically. It started out as an idea for an instrument where my creator made me to be able to play myself because he knew that I would look so much different than anybody else that I may be ostracized for it. When I was born this proved to be the case, people don’t ever quite know what to make of me I think. And when people do not understand something, they tend to take the easy way out and let the fear into them. But usually within minutes people recognize the love and we become friends and they want to bang on me, so I let them. This usually becomes contagious and the love multiplies and combines and pretty much everybody around me is playing Cymbalman. Everybody wants to play Cymbalman. At least once. 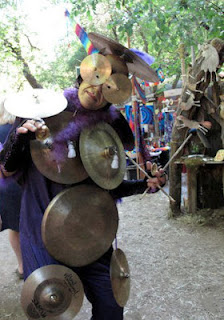 ME: When and where was Cymbalman born?

CYMBALMAN: Cymbalman was born in the head of his creator many, many moons ago but actually came into fruition in the summer of 2010. His first eye opening was at the Oregon Country Fair. He was only a baby and was only a prototype and has evolved since then. Every year my creator calls me in and he at least makes some kind of attempt to make me a better, well, not human being, but a better symbol.

ME: One of the intriguing things about Cymbalman is this sweet, silent character you’ve created. He’s not just a human instrument, he’s a very particular figure. For me, he has elements of a shaman and a of classic clown. How did this character develop? 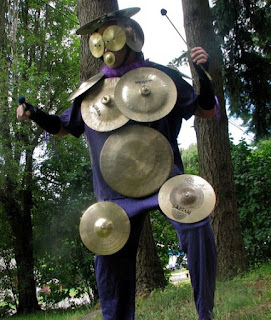 CYMBALMAN: Cymbalman developed out of love. Really. I know that sounds trite but it is true. I try to communicate through gesture and music but as of late I found that I can actually talk in certain situations. Mostly I like to sing.  I represent all the good that humans have to offer, plus the loyalty and unconditionality of a pet dog. Peace and love and all that other hippy shit.

ME: There’s a great vulnerability in putting yourself out there to be played… with mallets. Isn’t that dangerous? 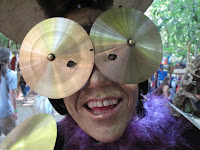 CYMBALMAN: Sure it's dangerous, but it was part of the reasons I was put on this planet. I find that if I approach people with gentleness and reverence it is reciprocated in the way people relate back to me. As a result, I don’t get too much of the bangy, bangy. I hate the bangy bangy. Sometimes when they go for the eyes it hurts a little bit, so I have to put a stop to that fairly quickly.

ME: Has your costume evolved? You’ve got the cymbals, of course, you’ve got a purple boa and tassels, you’re all decked out in the colors of royalty. Where did these elements come from and how did they become part of Cymbalman’s persona? 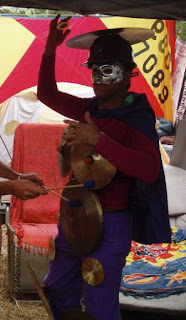 CYMBALMAN: My creator, he loves purple. In fact he told me once that back in his hippy days he was known as Mr Purple. I suspect he made me to wear this color as a result of that. I think that maybe he made me in his own image, but I have never seen him, really, and doubt that I ever will, so who can say for sure? I know that he made me asexual, and that I adorn anything that looks good. Whether they be boas or lovely long silk gloves or knee high platform pleather boots. I am not afraid.

ME: Do you have a favorite Cymbalman moment?

CYMBALMAN: My moments are ongoing. In the face of a two year old who is afraid of me at first but warms up rather quickly and the smile he/she gives me fuels my heart. The same holds true for everyone as as they learn and explore the love of Cymbalman.

As far as a particular moment goes, there is one. I once showed up at a party of some mutual friends of my creator. There was a writer there, a rather famous and well revered one, I think. When I presented the mallets for him to play me, he didn’t know what to make of it. I had to show him more than once. When he finally figured it out, I think he enjoyed playing me. At least the grin and the laughter that came out of his heart told me so. 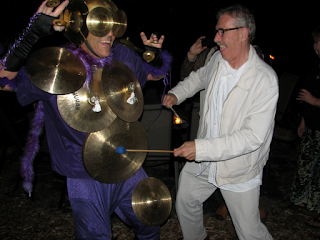 Cymbalman will be performing at SongStory on March 7th at Someday Lounge as part of the March Music Moderne music festival. Also in the program will be readings by Kevin Sampsell, Lidia Yuknavitch, Courtenay Hameister, Brad Rosen, Vanessa Veselka and yours truly.

Facebook invite is here. And info on the other great events that are part of March Music Moderne is here. 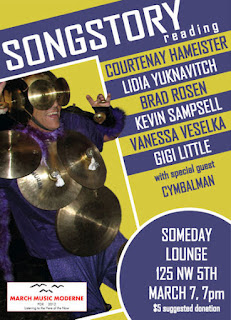