For me, the end of August was two things. One: time off to celebrate my anniversary with Stephen. Two: my chance to Live Like Julia - in which I chose one of ten rules spelled out in Karen Karbo's new book Julia Child Rules: Lessons on Savoring Life, and lived that rule for one week. My chosen rule was Cooking means never saying you're sorry. For that one week I pledged to [try my damnedest to] never apologize.

And that's what I did. I tried my damnedest. You can see most of that damned trying here and here. 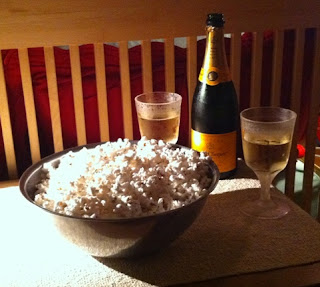 I love that I chose rule number eight because that chapter also contains this word of advice: "Find yourself a Paul Child" - Julia's lovely husband who played production assistant for tapings of Julia's shoestring-budget television show The French Chef, doing dishes, even "shovel[ing] the snow off the fire escape before lugging in the pots and pans they'd brought from their own kitchen."

"Reader," Karen Karbo writes, "I wish I could offer concrete advice on how to find and land your own Paul Child, a guy who will effortlessly switch roles with you if and when your career suddenly takes off, becoming in a matter of a few short months the wife to you that you once were to him, but I fear it’s mostly a matter of luck." 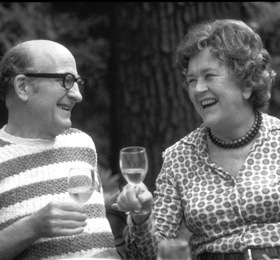 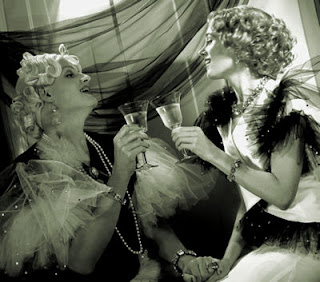 Stephen hasn't had to do any role-switching on account of my budding chef or television career, but I've definitely been lucky to find a husband who's my kind of wife. Lucky I can be his kind of husband. And all vice versa.

I had to cap this Live Like Julia week with something special for him. My cold was going away and now that I'd spent a week eradicating my over-apologizing ways, it would be the perfect test: to see if I could cook a fancy French dinner for him and not apologize for it. A grand task. I am not a cook. I'm also a vegetarian and Stephen tries to stay dairy-free and wheat-free, so some substitutions would have to be made. So without apologies, I give you:

Ingredients:
*Some recipes call for adding cognac and then setting the kitchen on fire, but you decide against it.

1.  Find supposed Julia Child Coq au Vin recipe online and then, just before leaving for the store to get ingredients, notice, at the bottom of your printout, one review: "This recipe was costly and time-consuming. The results were revolting." Quickly find two more supposed Julia Child Coq au Vin recipes online [there are many and they are all different]. Take all three to the store just in case.

2.  Give yourself a goodly amount of time for cooking since, even though the recipes say this will take an hour and forty minutes, you don't want to trust yourself.

3.  Put morels in bowl and cover with hot water. Soak until soft, then remove from water. Set aside in a pretty place and take picture. 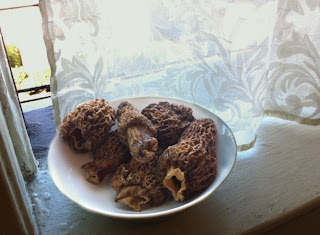 5.  Fry bacon over medium heat, then place on paper towels to drain. Keep the bacon grease in the pot. Fry fake bacon in separate pan. Remove before its neon red color turns brown. Add olive oil because there will be no grease left in that pot.

6. Strain the water from the morels and realize you can use it [along with Better Than Bouillon] to make your stock. You are a genius. Gain a nicely-inflated sense of self.

7.  Turn heat to high and sear chicken until golden brown on both sides. Stick the meatless cutlets in their separate pan. Don't they look lovely? Take picture. 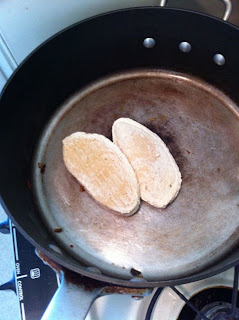 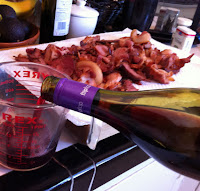 8.  Add onions, garlic, bay leaves and thyme. Sauté six minutes, then add broth and red wine. Bring to a boil, reduce heat to a simmer. Cover and let simmer for thirty minutes. Remember you're supposed to be doing the same thing to your pot of frozen meatless pellets and rush to catch up.

9.  After thirty minutes, remove chicken [and in turn now-unfrozen meatless pellets] and place in oven-safe dish and put in oven to warm while you work on the sauce. Realize you were supposed to have preheated the oven to 250 degrees somewhere along the line.

10.  Into the red wine sauce in each pot, stir 1 tbsp.butter [or Smart Balance since your husband tries to avoid dairy] and 1.5 tbsp. flour [since you forget that your husband also tries to avoid wheat]. Bring to a boil and stir constantly. Add mushrooms, bacon [and fake bacon] pieces, salt and pepper and cook for 10 to 12 minutes.

11.  Place chicken back in sauce and serve with braised asparagus and a good salad. 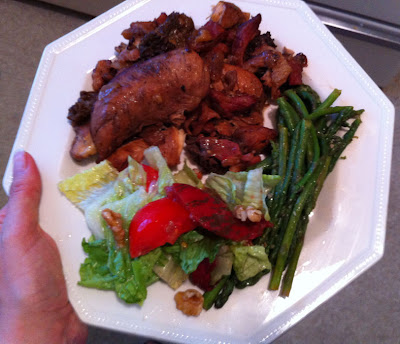 Yield: there's nothing wrong with lots of leftovers.

Time in actuality: 3 1/2 hours. Not including making the salad and asparagus. No apologies.