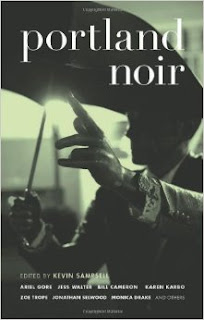 Having a story by Kevin Sampsell in City of Weird has a funny sort of deja-vu to it for me. A very sweet deja-vu, because seven years ago, we were in a similar situation with the roles reversed when he accepted my story for the collection he was editing, Portland Noir. I very much had Portland Noir in mind when mulling the theme for City of Weird - both play with popular, often-deemed-campy genres, both are centered around Portland.

Though he and I worked for the same giant city-block-sized bookstore, I really didn't know Kevin when he accepted my story back then, but in the years since we've become friends and I've been a great admirer of his work, including his memoir A Common Pornography, and his novel This is Between Us. Both books are made up of lovely, quirkily-written bite-sized pieces that offer a glimpse of insight and then end, leaving you hungry for the next and the next - making both books so hard to put down even if it's late and your eyes are tired - and these fleeting, hungry glimpses finally coalesce to give you a detailed, profound and surprising picture by the end of each book. His City of Weird story "In Transit" does the same thing.

Along with these books, there are so many others that Kevin has his hands in, including the short story collections Beautiful Blemish and Creamy Bullets, the collection he edited called The Insomniac Reader, and A Common Pornography, the 2003 chapbook of the same name as his 2010 memoir and said to be a "memory experiment," recording details from his childhood.


But that's not all. He's also the publisher of Future Tense Books, one of the oldest micropresses in the country, publishing terrific stuff like Monica Drake's The Folly of Loving Life, Chloe Caldwell's Legs Get Led Astray, and Wendy Ortiz' Excavation. His next book, I Sing the Song by Meredith Alling is out this month. 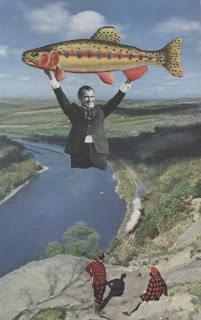 But that's not all. Kevin is also an accomplished collage artist. You can check out his work on his website here.

He's got a show up right now at Rudy's Barbershop on SE Division. You can check it out through the month, and there will be an event on the 17th. The Beauty of Passing Through.

I find it so interesting that Kevin is doing collage now, because that's exactly what his writing seems to do - take small pieces that feel disparate and set them down next to each other, arrange them in a way that creates this odd, quirky, fascinating whole.

Last year, City of Weird was included in the curriculum of professor Thea Prieto's Introduction to Horror Fiction class at PSU, One of the students wrote a short piece on Kevin's story "In Transit" for the school's Chiron Journal. That piece is here - and note, there are spoilers.

Here's a little taste of the story.

I never look anyone in the eyes on the MAX train. The last time I did, a man talked at me for the next thirty minutes about his lost cat. He kept stressing the fact that the cat had yellow paws, as if that was a rare thing. Maybe it is. I don’t know. I’m not going to Google it or anything.

Another time, a guy with long hair, a denim jacket, and a big crystal on a necklace said he didn’t like the way I was looking at him. I was only looking at his necklace, so I tried to be nice and said I liked his crystal. He took his crystal off and put it in his pocket, as if punishing me. I couldn’t look at his pretty crystal anymore. “I’m a window,” he said. “Look at me like I’m a window.”

I looked at the window.

Kevin will be reading at our City of Weird event for Wordstock's Lit Crawl® on Friday. November 4, at 7 pm at the Oregon Ballet School.