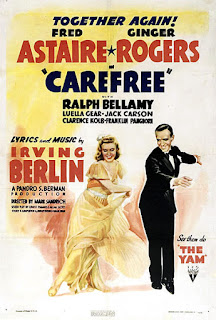 Stephen and I are huge fans of Irving Berlin. So much so that on Friday night, after we watched the sweeping biopic one-man-show Hershey Felder as Irving Berlin at Portland Center Stage, happy in that afterglow of a good night of theater, we had to go home and watch Carefree, one of the Fred Astaire and Ginger Rogers films featuring Irving Berlin's music. I'd been up since five and had worked all day and I knew I'd fall asleep within probably the first half hour, but I didn't care. I had to have more.

And I did. Both. I had more and I fell asleep. Contrary to what the movie poster advises, I did not stay awake to see them do "The Yam." But it didn't matter because earlier in the evening I'd been treated to Irving Berlin's entire life as encapsulated and dramatized and sung and played on piano by Hershey Felder, the playwright/performer who has brought to life such figures as George Gershwin, Chopin, Beethoven, Abraham Lincoln, and Shirley Temple. OK, he never did Shirley Temple, but I wouldn't be surprised if he could pull her off. He did some pretty nifty impersonations during Irving Berlin, including a pretty spot-on Ethel Merman, and I figure from there it's just a short hop, skip and a jump to the Good Ship Lollipop. 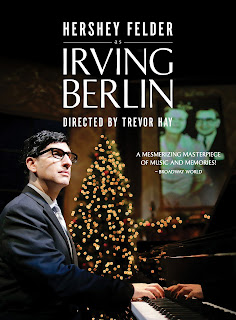 The show opens with Felder as a young Irving Berlin in conversation with his older self as personified by a wheelchair that sits stage left throughout the performance - and then he proceeds to take us through his whole life, starting with his childhood. It's a lot to encapsulate: one hundred and one years, in fact! It's a fascinating life, from the triumphs of his career to the heartbreaks of his lost loves, and through it all is music. To name a few of the songs Irving Berlin wrote: Cheek to Cheek, Alexander's Ragtime Band, I'm Putting All My Eggs in One Basket, There's No Business like Show Business, Anything You Can Do I Can Do Better, Easter Parade, Always, I Used to be Colorblind, God Bless America, The [aforementioned] Yam, Blue Skies, What'll I Do, I'll See You in C-U-B-A [popularized by the character of Ricky Ricardo], Puttin' on the Ritz, I've Got My Love to Keep Me Warm, and White Christmas.

Felder doesn't just tell the story of Irving Berlin's life. He sings it and plays it - sometimes accompanying his own singing, sometimes accompanying clips of famous film flashed on the huge decorative mirror center stage - and, heads up: at one point, he makes you sing it too. I usually hate singalongs. After the show, my husband said to me, sort of incredulous, "You sang along!" I don't know what made me go for it this time. Maybe it was Hershey Felder's very personal performance that made me feel comfortable. Maybe it was that I felt proud that I knew all the words and didn't need his calling them out to help jog my memory. (Even if my knowledge of some of the songs was a little less classic Irving Berlin. Here's my favorite rendition of one, Always, performed by the powerhouse Damita Jo with Steve Gibson's Red Caps.)

In his performance as Irving Berlin, Hershey Felder has lovely timing. He takes us to very deep places, bringing us just to the brink of melodrama in a manner that is befitting a figure who pens such lines as Soon we'll be without the moon / humming a different tune and then / There may be teardrops to shed / So while there's moonlight and music and love and romance / Let's face the music and dance. And from that brink, he does a quick about-face and drops into a joke, or simply directs his energy forward as if Berlin is saying to us with that dry wit of his, eh, life moves on. 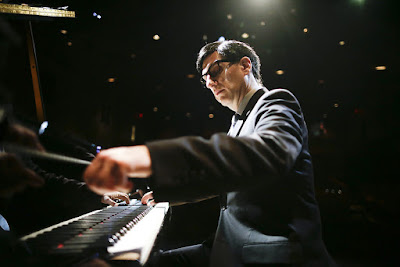 These days I can't see a show, watch a movie, read a book without pulling in some extra layer of context based on the current political climate and the changes that have come and are going to continue to come into our world. During a lot of Hershey Felder as Irving Berlin, I found myself musing on, and occasionally suddenly choked up about, the idea of Berlin's patriotism, his devotion to this country. Here was a man who was born in Russia, lived in poverty, immigrated to America with his family in search of a better life. Here was a Jew who, ironically, gave us Easter Parade and White Christmas, who had changed his name from Israel Isadore Baline in response to anti-Semitism. Here was a man who, with all of his fame, was still "other" within the culture, still felt (at least from what I learned from Felder's performance) like an outsider, yet held onto a deep love of this country and gave us one of the most patriotic songs of the American canon, God Bless America. Called America his "home sweet home."

As this country moves more and more toward marginalizing and rejecting its immigrants and its so-called "outsiders," Hershey Felder's Irving Berlin has what we need: a determined love of home, a soupçon of old fashioned schmaltz (no, I mean that in a good way), and a reminder that, no matter what happens, there will still be music.

It's running through December 30th at the Armory. More info is at Portland Center Stage here.

Thank you to Eighty Eight Entertainment for the pictures and Wikipedia Commons for the Carefree poster.