Hedwig and the Angry Inch at Portland Center Stage

I've realized in the last year or two that I hardly listen to music anymore. When I drive to and from work, I'm listening to the news. On my lunchtime walks, it's podcasts, and when I'm working on a design project and want something in my ears, it's old-time radio shows. In part, I think, because I don't have children, I've lost the thread of modern music. I don't know what it is anymore. But music used to be nearly everything to me. 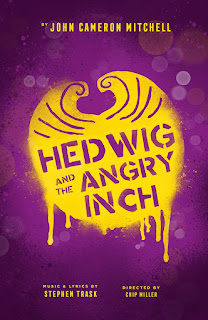 And Hedwig and the Angry Inch, the film, was huge to me when it came out. What year was that? Wow, 2001. I was nuts for that film, especially the music, so I was equal parts excited and trepidatious when I heard Portland Center Stage's was going to be producing it. Would their Hedwig stand up to my revered image of John Cameron Mitchell? Would the music be tight enough? Would the show (feels silly for me to say, but) rock enough?

(Feels silly for me to say, but) The show totally rocks! And is hilarious and is raunchy and is complex and is a wonderfully immersive experience in the Armory's intimate Ellyn Bye Studio. And the set!

Let me give you a recap if you don't know the story. You're in a mall. Yes, you. You're part of the show because you're a member of the audience as Hedwig, the genderqueer (I use that term specifically because that's how John Cameron Mitchell describes her) front-man for the broken-down rock band The Angry Inch, performs a show in the food court of an equally broken-down mall.

As she performs, she tells her story—being a boy in Germany; escaping from East Berlin to America with the aid of a botched sex-change operation (hence the "angry inch"); mentoring young rocker Tommy Speck; losing her way as Tommy Speck became superstar Tommy Gnosis, stealing her music as he left her behind.


But now, relating her story on stage, accompanied by her four-piece band and her backup singer/husband Yitzhak, Hedwig is head-up and haughty, audacious and sexy as she rocks the house in that sad, dilapidated mall—oh, but I was telling you about the set!

It's perfectly awful. And I mean perfectly in the positive sense. The overflowing trashcan, the broken candy machine, the half-burnt-out neon sign over the entrance to the mall-embedded Chili's restaurant. I love the signs that advertise the place as the "Star Court," a branding that's also on that broken vending machine. But the pièce de résistance is the tongue-in-cheek irony of the poor, dead escalator, standing in for the luxurious staircases of the musicals of Golden-Age Hollywood. Hedwig is played by actor Delphon "DJ" Curtis Jr. His vocals seemed a little unsure at the start of the show, perhaps opening night jitters, but it didn't take long for him to find his footing. As an actor, he mixes Hedwig's haughtiness with just the right amount of bitterness and poignancy, and his sexy banter with the audience brings lots of laughs. I enjoyed the moments when he was playing both Hedwig and Tommy, switching back and forth between voices, accents, genders. When he more fully takes on Tommy's character toward the end of the show, it's a fabulous transformation.

As a singer, Curtis has a lovely voice. What an incredible range. It can take him from quite low to beautifully high, as in the surprising opening to his performance of "Hedwig's Lament." And when he's in full-on rock 'n roller mode, he hits some high notes that blow you away.


If you're familiar with the film, take a tip and see the play. It's beautifully constructed around the device of the shopping mall performance, with the story of Hedwig's life perfectly weaving in and out. You're immersed in not only the drama of the stage play but the joy inherent in a rock show. There's a wonderful moment from an editing standpoint where Hedwig is telling you just how it came to pass that she was persuaded to have the botched sex-change operation. Suddenly the music starts and she sings, "When I woke up on the doctor's slab." From the moment before to the moment after—and you go from this very dark place right into music. Powerful, driving music. That's when I thought to myself, "Man, I miss rock 'n roll."

You could have a blast at Hedwig and the Angry Inch for the music alone, but it's also a surprisingly moving show. Stephen said the same thing to me, leaving the theater: "I was surprised, I got a little teary." (OK, me, I got very teary.) Stephen talked about Hedwig's emotional transformation, and I'm going to leave it at that because there's a surprise twist not only for those of you who, like me, were enamored of the movie but unfamiliar with the stage play, but also for those of you who've seen the play before, and I hate spoilers. But what was interesting to me was that while Stephen's emotional reaction came for Hedwig, mine was for Yitzhak.

Both characters have their moments of emotional climax (man, after all the double-entendres in that show, my brain has a little slant to it today). The thing about Yitzhak is that he's so in the background for much of the show that the conclusion of his particular story arc, at least for me, hits surprisingly strongly. I'll leave it at that because again with the spoilers, but let me talk for a moment about Ithica Tell.

I loved her in a recent production of The Color Purple, and I was intrigued to see her name in the cast list as Yitzak. I thought she was a wonderful choice. She does great deadpan straight-man work as Hedwig's long-suffering husband, and her quiet smolder of in-the-background bitterness provides a great build-up of tension as we follow her own story as it rides secondary to Hedwig's.

Like Delphon "DJ" Curtis Jr., Ithica Tell also has quite a range on her, vocally. She's able to go from very feminine to very masculine as she sings backup on Hedwig's songs. This range combined with her beautifully masculine look gives Ithaca Tell's Yitzhak the perfect gender mix for the show, I think, and makes her seem just right as Hedwig's other half.

I thought she did a sweet turn on her solo "The Long Grift." Her voice on that was clear and lovely feminine. Then elsewhere her sound would be surprisingly masculine, like on the backup vocals of a certain song where she was so deep and angsty she reminded me of the heavy metal music of my youth. It was very different from what I remembered of the same song in the film, and it felt so much more effective, so much more powerful. I loved the interpretation. So much that I wanted to tell you all about it, but one day later, and I can't remember which song! I've been wracking my brains. That's what a lot of my experience of theater tends to be like, actually, with this incredibly flabby memory of mine. The next day I'm basking in the reminiscence of a lovely evening, but the particulars have faded and what I'm left with is the memory of feeling. Of all the laughter, of the joy of music, of the surprise of tears from a moment unexpected. Portland Center Stage's Hedwig and the Angry Inch is a very full show and even as we were leaving the theater, I was craving another look. "Makes me want to watch the movie," I told Stephen.

Stephen countered with, "Makes me want to see the play a second time."

We may just do that.

Hedwig and the Angry Inch is playing now through February 23rd at the Armory. More information is here.