One of the funnest projects I've had lately has been for Kate Ristau's new series Mythwakers.

Anyone who knows Kate or reads Kate knows that any project having to do with Kate is going to be fun. Like her graphic novel Wylde Wings (with artist Brian W. Parker of Believe in Wonder Publishing). She hired me to basically be her last set of eyes on the interiors of the book, making sure it looked as good as it could look, and even being just that tiny part of that project, I felt blessed... blessed with fun.

Going through that book, I was so drawn into the story and the voice, not to mention the fabulous artwork by the actually magical (no, I'm pretty sure he is) Brian W. Parker. It made me want, more than ever, to be able to get my own hands into a Kate book—and then abracadabra, it happened!

I love the concept behind Mythwakers. It's a series of books that teach kids (grades 3-5) all about mythology, through the point of view of its characters. The first in the series spotlights the minotaur. It's Asterion himself, telling his story from his own point of view. How fun is that?

Designing for a series is a very particular experience. Book cover design is about puzzling—taking all the elements (title, subtitle, author name, blurb, relevant imagery, genre, tone) and fitting them together perfectly—but with a series, you're building something that will live beyond the initial book. That's a whole separate kind of puzzling.

Now, I should mention that Kate Ristau, along with being fun, is a person who knows a heck of a lot about not only writing but creating, concepting, designing—really, all the aspects of putting together a really good book. So she came to me with clear ideas of what she wanted. She had comp titles for me (books that are comparable to hers), ideas on color, thoughts on layout... she even made me some quick sketches to show what she was thinking. 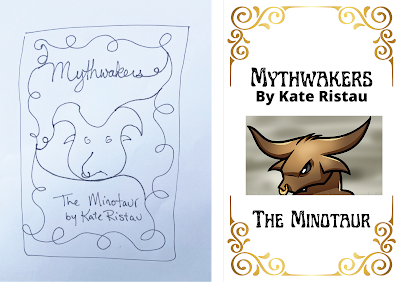 I loved her ideas of the scrollwork connecting things together. And then I started thinking about the idea of Mythwakers. How best to portray the idea of myths waking. Coming up out of sleep. Bursting back to life. I pictured the magic of myth coming up out of an open book.

Really, once I'd spent some time thinking it through, the visual concept for Mythwakers burst out much like that mythly magic bursting out from the book: quickly, happily, and fairly fully formed. Kind of like Athena bursting from the head of Zeus, but that's a different myth. 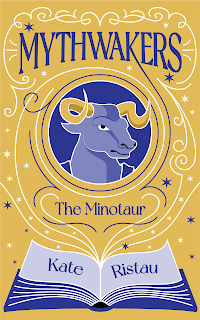 Usually I send more than one sample-in-progress, but I was so happy with what I'd come up with that I sent that single sample Kate's way. And she really liked it too. Then we made one big change. From a book to a scroll, which brings an element of antiquity into the design. I sent Kate three versions of this for her to choose from. 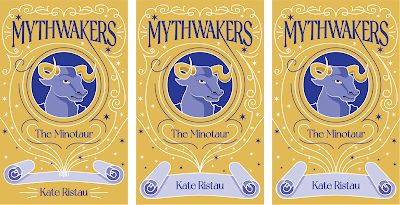 She chose her favorite, and we had our cover! 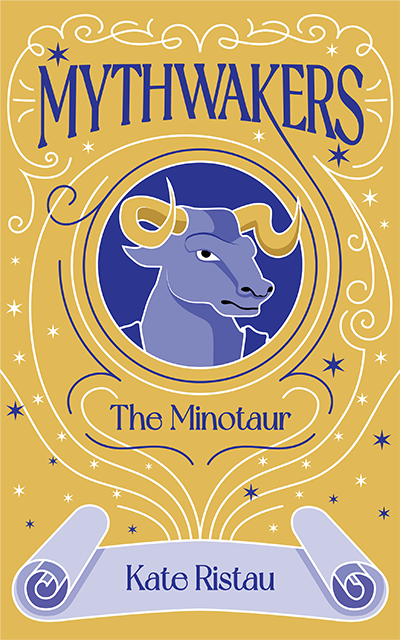 The Kickstarter Pre-Order for Mythwakers: The Minotaur launches today, November 1st, and goes until November 17th. There are lots of fantastic rewards too—including, I'm told, a Minotaur meeting! If you want to check it out and even help bring this book to life, you can find that here.

More info on Kate and all her books is here.

And here's an excerpt!

Hi! My name is Asterion! I am a minotaur. You may recognize me from such books as Clockbreakers by Kate Ristau, or from old-timey poems and epic stories written by guys like Ovid and Plutarch. Those authors got some things right, but they got more than a few things wrong, and I’m here to set the historical record straight.

My life is pretty a-maze-ing. Get it?

That joke never gets old, even after all these years. I mean, you could almost get lost in it.

Moving on, I am so glad you are here. I am a Mythwaker — a legendary character from an ancient myth that has come to define an entire generation. What? You don’t know what a myth is? You are totally going to love this. Pull up a chair, get comfortable, and we’ll explore myths, mazes, and most importantly: me.

A lot of people use myth to mean a fake story. That’s one meaning of the word myth, but the kind of myths I am talking about are mythology — the foundational narratives, or stories, of a particular culture.

Sorry. I used a lot of big words there. All those centuries trapped in the labyrinth were SUPER BORING, so I read a lot of scrolls.

Back to myths — just think of them as the important beginning stories of a group of people.

The group of people — or culture — that we will be talking about today is the Greeks, and a little bit about those Minoan dudes too.

That’s the thing about myths — they are around for a long time, passed down from one person to the next, so not all the versions are the same. Think about if your best friend told you a story, which you turned around and told your grandma. Would you tell the same exact story your friend told you to your kind, gentle grandmother? Would you keep all the bloody parts or would you clean things up a bit? You would probably make a few changes, right? Most of us do, and that is why myths are never told the same way twice.

Stories change depending on who is telling them and who is listening to them. If you’re talking to your best friend, you might be shouting about fiery salsa and guacamole. If you are sweetly sitting beside your grandma, you could be whispering about butterscotch and rainbows.

That’s the thing about myths: the audience matters.

How we remember myths has a lot to do with who was telling the story and who was listening. The stories were constantly changing, but the ones that hung around were the ones that people remembered. They appealed to the culture. They mattered to the listeners. In this way, the audience and the storytellers can change myths for the good, for the bad, and for the tacos.