Of the differing opinions on how (and specifically how much) to celebrate the holidays, I'm in the celebrate-all-December camp. Time goes too fast these days and for me it takes an entire month to equal the potency that Christmas Eve and Christmas Day used to have for my kid brain. If you're in my camp, one thing I'd highly suggest along with the decorating and the well-wishing and the gift-giving and the winter overeating is for you to go out and see at least one piece of holiday theater. 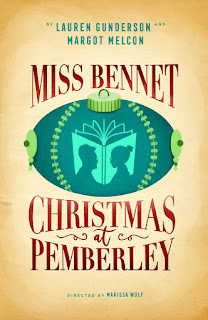 A wonderful example of this is Portland Center Stage's Miss Bennett: Christmas at Pemberley. We saw it last night and it was the perfect kick-off for this holiday season.

The setup: it's 1815, two years post-Pride and Prejudice, and the Bennet sisters and a couple of their significant others are gathering at Pemberley for Christmas.


Along with Elizabeth and Mr. Darcy, now-pregnant Jane and her husband Charles, and flighty-flirty, married-but-still-on-the-lookout Lydia, there is Mary Bennet, the middle child, who has never found her significant someone and spends her time mostly with her books and her pianoforte. Written by Lauren Gunderson and Margot Melcon, Miss Bennet: Christmas at Pemberley reimagines the Pride and Prejudice universe, putting Mary at the center as she meets her match, the equally bookish Arthur de Bourgh.


You don't have to be a Jane Austen aficionado to enjoy Miss Bennet (although if you are, there are lots of added treats in the script for you). For that matter, you don't have to be big into Christmas either. The story stands on its own with lots of romance and lots of laughs, some beautiful staging that's almost like dancing at times, and doses of good old-fashioned screwball comedy. I think Jane Austen would be pleased with the snappy, witty dialogue and the insightful social commentary. I'd love to know what she'd think about how the playwrights imagined the lives of her beloved characters carrying on into the future.

OK, can I just talk for a moment about Lauren Modica? I just thought she was terrific and stole the show. I think you don't usually use the phrase "stole the show" for a leading lady, but I can't help it. Her delivery of Mary Bennet's sharp wit was pitch perfect and she moved between emotions with a fluidity that was kind of mesmerizing to me. There were times when the action was happening in one part of the stage and I found myself listening to the dialogue but watching, instead, Lauren in a completely different part of the stage, as she silently reacted. Incredulity on her face would make me laugh and then it would melt into something hurt or something bittersweet and I would feel a pang of heartbreak for her. I couldn't stop watching the play through her reactions. They were so beautifully nuanced and changeable that I could have watched the entire production with my eyes on Lauren Modica, taking in all the other action peripherally.

The plot of Miss Bennet goes where you expect it to go, but a story like this isn't a question of oh-no-what-will-happen; it's all about how we get there and all the laughs along the way. With fast-paced, smart directing by PCS Artistic Director Marissa Wolf and a beautifully diverse cast, Miss Bennet Christmas at Pemberley is a witty, first-class romp and a great way to celebrate the holiday season. 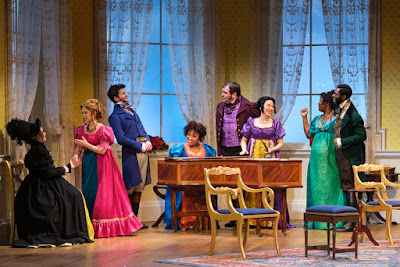 It runs now through December 29th. More information is here.

Photos by Russell J. Young/Courtesy of Portland Center Stage at The Armory