This year I had the chance to design a cover for a kind of book I haven't had a chance to design for before: a picture book. Picture books are very close to my heart, and of course I jumped at the chance. Brownie's Big PDXmas is a charming story about a Swiss Bernese Mountain dog who has a holiday adventure in her home of Portland, Oregon. The book is written by Karena Stoner and illustrated by Anastasia Khmelevska.

It was fun to work with Anastasia's lush, glowy illustrations. For the front cover background, I took the Brownie figure from one of her illustrations and added it to the cityscape from another.

Karena had a font in mind for the main text but unfortunately, when we started working on the front cover, she couldn't locate it again, so I offered to create the lettering by hand, based on the principles of the original font.

To create it, I laid the title out in Illustrator using a kid-friendly font, basically just for spacing, found a lay-out we liked and which fit nicely into the illustration, and then I built the new lettering on top of that layer, using simple lines. Here's an example along that process. The lettering for the author and illustrator names are still just stand-ins and you can see their shape is very different from the shape of the lettering I was creating. 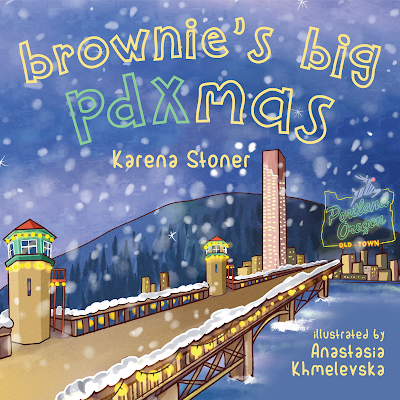 Once we had lettering with a shape that Karena liked, I experimented with different textures for the inside: simple hatch lines, yellow balls (a la the holiday lights studding the illustration) and Karena's great idea: squares to mirror the windows in the tall building in the illustration that Portland residents will recognize as "Big Pink."

Karena chose the Big Pink version and then I refined it, adding more of a glow, then built lettering for the smaller words based on the shapes of the larger letters. I enjoyed working with the colors in the illustration, the Big Pink pink, the Portland sign green, giving us a color scheme that still looked holiday but wasn't too on the nose.

Speaking of nose, here comes Brownie, making her debut on the cover of her very own book! Brownie's Big PDXmas is available now through Barnes and Noble here, and will be available in lots of other places soon. I hope you'll check her out and get lost in her sweet adventure. 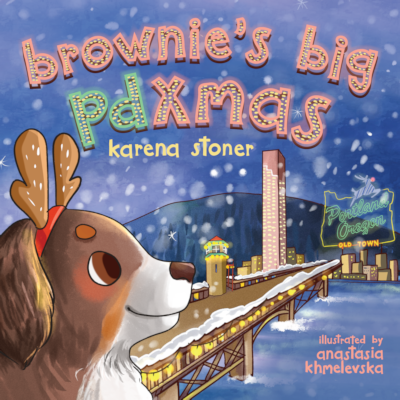