Book Cover: The Story of the Hundred Promises

The next Forest Avenue Press book, The Story of the Hundred Promises, by Neil Cochrane, is an adult fairytale, loosely based on Beauty and the Beast, with a trans protagonist. How cool is that? It's got a mysterious enchanter and a magical rose bush and silver trees that withstand human greed (!). This was one of those books whose premise gave me a fairly instant idea of what I wanted to experiment with for the cover, and I knew it would be fun.

I love old book covers, and I love emulating their styles and bringing them into a modern aesthetic, as I got to do with The Alehouse at the End of the World (illuminated manuscripts) and Froelich's Ladder (fancy mid-to-late-1800s books). For this cover, I looked at a lot of beautiful old storybooks. 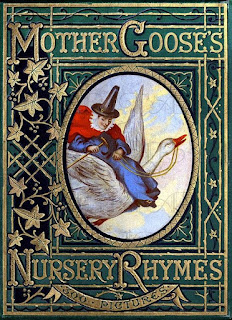 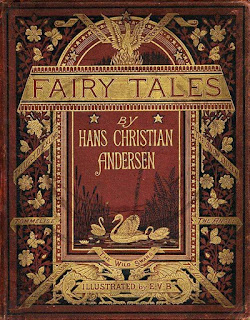 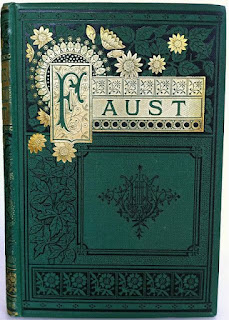 Just kidding. That one's not for kids.

(Granted, Neil's novel isn't a kids' book either, so we're even.)

I love the detail in these fancy, old book covers, and I love the simple, elegant color schemes. For my own experimenting, I started with greens and golds because I knew that the environment I wanted to depict in my design was something woodsy—to instantly evoke a fairytale feel and because I was going to include the tree and rose elements from Neil's story. 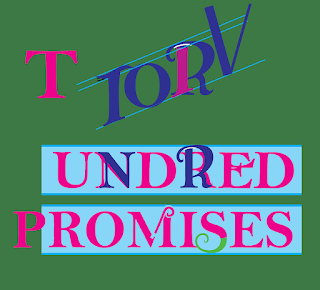 Once I had a working title, I built the rest of the design around it. I had two basic designs in the beginning: one more intricate and sans roses, and the other that felt more storybook to me. I liked the rose bush element particularly because thorns put some energy of tension and danger into the design. 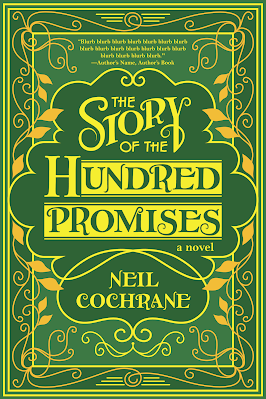 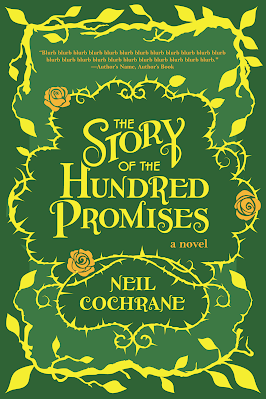 I sent some samples to publisher Laura Stanfill and she discussed them with Neil. There was some back and forth as I played with different versions... 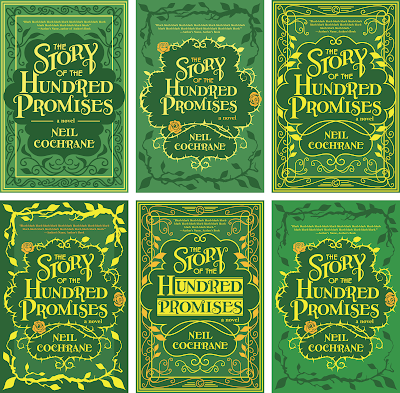 And then once they'd made their choice (they went with the rose thorns), there was a lot of experimenting with color. 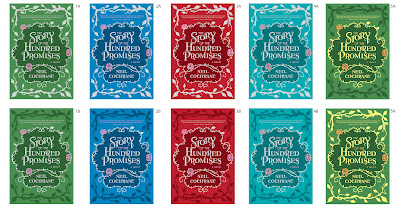 Neil wanted me to try the branches in silver to reference the silver trees in the book. Laura wondered if purple flowers would compliment the silver details, and although the purple didn't end up working like we wanted it, it made me try purples as the background colors as well, and Neil really liked that. In fact, he had this to say:
I also LOVE the purple, it feels lush and gay just like the story, haha. I don't know how else to explain it.
Sometimes I get so far in my head with the considerations of what colors contrast well with other colors, and it's so nice to get that fresh take as to what the colors also invoke to someone outside my head—particularly the author.
In asking me to try yellow flowers instead of the various shades of peach and pink that I'd been playing with, he also said:
Bonus on the purple: purple, white, yellow and black are the colors of the nonbinary pride flag. 😄😄😄
Which kind of sold me even before I'd tried out the yellow. And as it turned out, the yellow worked really nicely. In the end, Laura and Neil chose the purple and yellow, and I was thrilled. Interestingly, although silver was originally requested for the branches, Neil ended up preferring dark purple branches—but the silver lives on in the text and in the thorns. 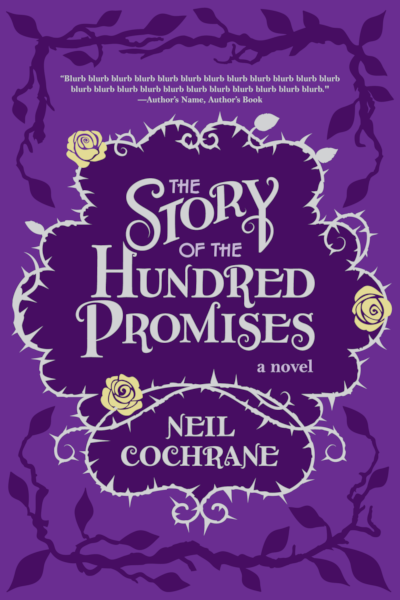 The Story of the Hundred Promises will be out October 4th, published by Forest Avenue Press.
Here's a taste:
*
Darragh noted the course of the river, and Iarom’s place on it, and nodded. “So what happened to the forest?”

“It wasn’t just the forest. There was some huge storm, a quake, a cataclysm they say,” Ceara said. “There were floods and rockslides; the road broke into pieces, houses collapsed. Plenty of people died—that’s when the Barrow was built. And the trees petrified. You can’t cut them at all now.”

“A storm doesn’t turn trees to stone,” Ceara shot back.

“What does?” Darragh asked.

She looked back at him, eyes wide, and said, “Magic. But not like the alchemists. My gran, he said—”

“Your gran is so old he hardly remembers his name.”

“Yes, so old he was alive when it happened!” Ceara replied. “He was too young to remember himself, but his parents told him all about it, and they always warned my parents to stay away from the forest, because something dark and powerful lived there. It got angry when people chopped down the forest, and it punished them.”

The older officer huffed again, more forcefully this time. Darragh glanced at them, then leaned into Ceara and said, softly, “I believe you.”

She smiled and, suddenly shy, bobbed her head and left him to study the map.
Posted by Gigi Little at 9:23 AM