I was recently engaged by one of my favorite publishers, 7.13 Books, to design a book cover for their upcoming novel Edie On the Green Screen.

The book is the first novel of bestselling writer Beth Lisick (Everybody Into the Pool). Here's the publisher's book description:

Edie Wunderlich was a twenty-eight year-old It Girl in late ‘90s San Francisco, on the cover of the city’s alt-weekly, repping the freak party scene on the eve of the first dotcom boom. Fast-forward twenty years, and Edie hasn’t changed, but the city has. Still a bartender in the Mission, Edie now serves a seemingly never-ending stream of tech bros while the punk rock parties of the millennium’s end are long gone. When her mother dies, leaving Edie her Silicon Valley home, Edie finds herself mourning in the center of the Bay Area’s tech monoculture, and embarks on perhaps a last-ditch quest to hold on to her rebel heart.

How cool does that sound! Well, when publisher Leland Cheuk began to talk to me about book cover design, he said Beth had some ideas he liked:

As far as covers, I'd like something bold and graphic. I think that chroma key green of the green screen would be a cool element, and it might be nice to see a female figure in shadow/all black in front of it, and then be able to see it's a backdrop and the green screen is in front of a wall or something.

I liked these ideas a lot. Leland said Beth would also like the cover to reflect the setting of San Francisco, and for that he suggested the Golden Gate Bridge as a landmark. Actually, he said "the GG Bridge," and me with my name, I made a joke about a Gigi Bridge and... Well, anyway I started there, spending a Saturday morning building the Golden Gate Bridge from vectors and pixels. 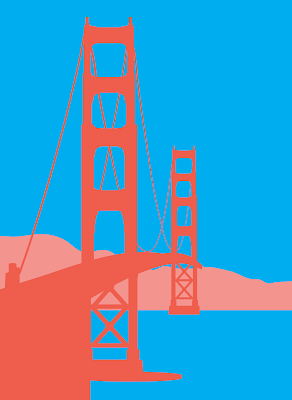 Beth suggested a woman walking toward the camera, so I built a woman, next, and started positioning her on the page in front of a green screen, tossing the beginnings of words down where it seemed they'd fit. Yeah, my early sketches are never impressive... 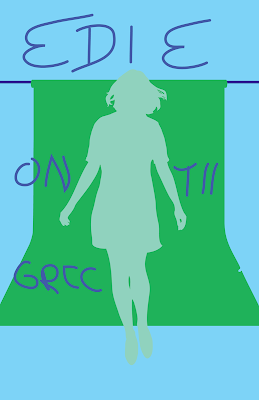 A green screen, in case you don't know, is a screen like the ones used in news shows where a meteorologist can stand in a studio and talk about the weather and it looks like they're standing in front of a huge map of the country with high pressure symbols bearing down on Minnesota. A green screen can take you anywhere. Sometimes those screens are blue, but most often nowadays they're green—a specific green called chroma key green, in fact. (I didn't know this until Beth mentioned the name.) I looked up that color and found out it's equal to 354C in the Pantone color matching system or 81, 0, 92, 0 on the CMYK color scale, and I used those values to get the color green for my green screen.

I liked the idea of showing, on the cover, the illusion a green screen can create, with the central figure of Edie creating the line between fantasy and reality, between the real green screen and the fantasy of San Francisco that I was creating with my Golden Gate Bridge. It made me think of the disconnect between Edie's present life and the life she used to have.

So I built my bridge, my woman, and my green screen, and I moved them around on the page. I created some flood lights to go along with my television studio setup, but the layout was getting crowded. Along with the green screen and the woman and the Golden Gate Bridge, I needed to fit the title, the author name, and a blurb.

I realized most of the title would fit really nicely on the woman, and a design began to emerge. 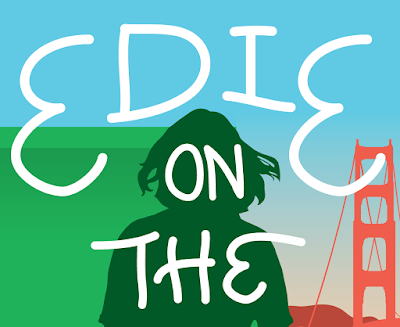 No, not that one. But it was a start.

The energy of the book seemed to lend itself to a hand-lettered approach, but I started to realize I wanted it to be all lowercase, a type treatment with a bit of cursive in it. And set at a slant to get some movement and energy into things. I love hand-lettering on book covers because the lettering itself seems to belong to the book and to the author. 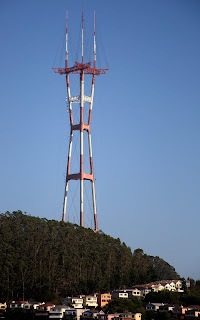 As I was sending samples back and forth and discussing tweaks with Leland and Beth, Beth's husband pointed out that because she had an image of the Golden Gate Bridge on another of her books, it might be smart to find something new. They suggested Sutro Tower, which is this.

As it turned out, nixing the bridge in favor of the tower allowed for a bit of breath that we felt was needed in the design, and we finally had our cover. 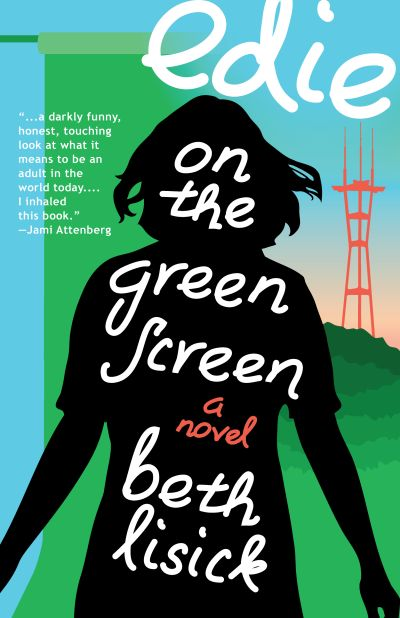 Edie on the Green Screen, by Beth Lisick and published by 7.13 Books, will be out in spring of 2020.

Here's an excerpt to whet your appetite!

Tanya put some powder on me, to suck the shininess out, before I stepped out on the floor in front of the green screen and tried to be loose. If only I’d brought my flask.

“What did you win?” the photographer asked. “I should probably know this, but we’re doing so many today.”

I paused for a second to consider the possibilities of an intelligent answer, but there wasn’t one. “I,” I pressed my palms into my eyeballs, “am the It Pal.”

“I know. They told me they had voted me It Girl, but then that was probably sexist which, okay, and if they had an It Girl, they’d have to have an It Boy, and there was something about it being gendered and they couldn’t agree on who to vote for and it all sounds so dumb. Like high school, right? The weekly news- paper is anointing the citizens of our city with stupid titles and no one is taking to the streets about it. Where is the outrage?” I shook my fist in the air and added a dopey smile. I wanted her to like me.

An editor at the paper popped out from the sidelines to defend her publication, a once-independently owned enterprise that was now run by a national conglomerate, fighting against their failure to be what they wanted to be above all else: “edgy” and “local.” The editor extended her hand, making things feel way more formal than they needed to.

“Our idea for the It Issue was to come up with categories that we’ve never had before and make it fresh,” she said, running her hand through her shoulder-length waves. “That’s why we have things like the It Pornographer, the It Tagger, and the It Vegan.” The pleasure she took in saying these phrases made me squirm. She was trying so hard. Give her five years and she’d be living in Mill Valley, popping out kids, and feeling competitive about her workout.

“I think that’s the thing,” the photographer said, ignoring her, which pleased me immensely. “What you’re doing right now. Keep not smiling if you want.” She pointed the camera at me while I tried to look through her, or through the camera and then through her, through the brick wall of the studio and out onto the alley where there were people in wheelchairs with their heads taped up. An alley of hacking coughs and oozing gauze and cheap coffee and forties and a lot of freebase. South of Market was like triage at an outdoor hospital.

As the shutter clicked repeatedly, I realized I was having a “peak experience,” a phrase I once heard a Jewish shaman named Vicki use referring to what could only be the beginning of one’s decline. There I was, summoned to a photographer’s warehouse on a wintry day to get my picture taken with the rest of the winners. It’s clear to me now that I was going down.