In The Heights at Portland Center Stage 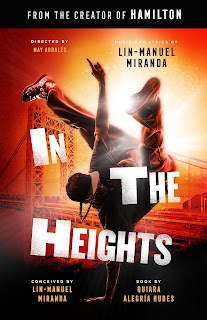 In the Heights, the award-winning musical by Lin-Manuel Miranda and Quiara Alegría Hudes, is three days in the life of a mostly Hispanic-American neighborhood in Washington Heights, New York. Usnavi de la Vega, whose first name comes from the first sight his parents spied when they arrived in America from the Dominican Republic (a ship with a sign reading US Navy), owns a bodega in the center of the barrio but dreams of getting out and returning to the land his people came from. Also living and working here are Kevin Rosario, the ambitious owner of a taxicab business; Benny, his dispatcher and the one non-Spanish-speaker around; and Abuela Claudia, the loving matriarch of the barrio. Kevin's daughter Nina, the one often praised for being the first to "make it out," has just returned from Stanford University, not quite ready to tell her parents and friends that she has dropped out.

There's also Vanessa, the salon worker who dreams of having her own apartment outside the barrio but can't afford the down-payment, and the Piragua Guy, who sells Puerto Rican shaved ice in fierce competition with Mister Softee. There are relationship problems and thwarted ambitions and a huge citywide blackout during an intense heat wave, not to mention the winning lottery ticket that has just been sold at Usnavi's store, but through it all, the central theme in In the Heights is home. 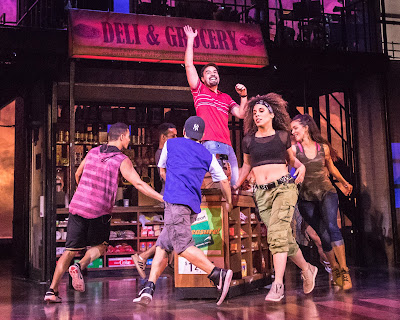 The answer, of course, is yes, but it's much more interesting an answer when it comes with the music and drama and wit of Lin-Manuel Miranda and Quiara Alegría Hudes. We saw Saturday night's performance of the production put on by Portland Center Stage, one of my favorite Portland theaters. I've never seen Hamilton and didn't know what to expect with In the Heights. I'll admit that at first I was afraid it would be difficult to follow for the likes of me. As the music began, the rhymes and the wordplay were coming at me so fast, but by halfway through that first piece, my brain had caught up and I was along for the ride. Here's a little taste:


I am Usnavi, and you prob’ly never heard my name
Reports of my fame are greatly exaggerated
Exacerbated by the fact that my syntax
Is highly complicated 'cause I immigrated
From the single greatest little place in the Caribbean:
Dominican Republic!
I love it!
Jesus, I’m jealous of it
And beyond that
Ever since my folks passed on
I haven’t gone back
Goddamn, I gotta get on that...

I can be kind of a jerk when it comes to modern musicals. Well, at least inside my head. There's a sameness and a preciousness and... just a sound I don't always enjoy. But In the Heights is different. The music is a mix of salsa and rap, feeling like the best of America: the vibrancy of its diversity and the energy of its perseverance. And it's so darn fun. The orchestra for Portland Center Stage's production, led by Eugenio A. Vargas, is tight, and the singing is first rate. And there's plenty of dancing by the whole, large cast. Including breakdancing! So much energy, so nonstop. We had to wonder how pooped the cast was when they finished the show. 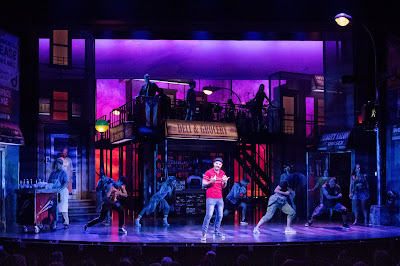 See in the above picture? That balcony above the bodega? Not only does some of the action of the performance take place up there, but the whole band—keyboards, reeds, guitar, trumpet, bass, drums—is mounted up there. Like the music is a part of the barrio, which feels perfect.

Some of my favorite parts in the show were delivered by secondary characters. Lillian Castillo was fantastic as Daniela, the feisty salon owner and neighborhood gossip, and I loved whenever she was suddenly, surprisingly belting it out on stage.


Another high point for me was "Enough," the song sung by Camila, the mother of Nina and the wife of Kevin, as she gives them both a piece of her mind about all their fighting and pig-headedness that's been driving the family apart. Carmine Alers performs the song with equal parts fierceness, funniness, and grace. It's a wonderful surprising turn for the character, and it's delivered beautifully. After the show, I looked up and watched some clips of that song to enjoy it again, and I found actors who tried to push too much tragedy or too much rage into their performances. Alers' delivery felt exactly as the song should be.


The night we saw the show, one of the actors must have been sick, because there was a cascading of understudies in a handful of characters, and one of the very biggest parts in the production, Nina, the romantic lead, was played by someone who doesn't normally play the part. She was great! Energetic and confident and nuanced and seemed like she must have been performing that character from the start. I don't know how much practice time understudies get, but Paola Hernández, who pinch-hit as Nina, and Emily Madigan, who pinch-hit as Carla, were both terrific. As was Debra Cardona, who's doing a short run as Abuela Claudia.

It says something about the actors, of course, but it also says something about the production as a whole, and how well it works together. Portland Center Stage's In the Heights works together very well. It's one of those shows where, in the end, you think that maybe the most important "cast member" is the ensemble. It sure feels that way when the stage is alive with music and dance. Like the rollicking "Carnaval del Barrio," the song that celebrates finding joy in both good times and bad, In the Heights, through all the plot's ups and downs, is simply a really good time.

It's playing now through October 13. More information is here.

Photos by Owen Carey/Courtesy of Portland Center Stage at The Armory.